This article takes you through how to build a full CRUD API using GraphQL. We end up hosting it in a Serverless function and also show how you can do external HTTP calls to build your API. Whether the data lives here or somewhere else doesn't matter. GraphQL is the front that your users will talk to.

TLDR; This article might be a bit long but it does teach a lot on GraphQL, queries, mutations. It also teaches you how to create a serverless function all in the context of .Net Core, C# and VS Code

In this article we will:

The first thing we will do is to create a Serverless function. But what is Serverless and why might it be useful in the context of GraphQL? That's really two questions but let's try to answer them in order.

Serverless is not about no servers but more about the server is NOT in your basement, anymore. In short, the servers have moved to the Cloud. That's not all, however. Serverless have come to mean other things namely that everything is set up for you. That means you don't need to think about what OS your code runs on or what Web Server runs it, everything is managed. There is more.

There is always more, isn't it? What now a fancy sticker?

It's about cost. Serverless usually means it's cheap.

Why is it cheap?

Well, Serverless code is meant to be run seldom and you are only billed for the time it executes

Ok, how do YOU make money?

Well, the function isn't always there. Whatever resources are needed are allocated when someone/something queries your function.

Doesn't that make it a bit slow like there could be some initial wait when it's scrambling to be created and then respond the query?

You are right. This is something called a cold start. This can be avoided however by either regularly polling our function or using a premium offering that shortens the cold start.

Why Serverless with GraphQL?

Ok, we are a bit smarter about the whats and whys of Serverless so why add GraphQL to the mix?

Well, GraphQL has the ability to stitch together data from different APIs so it could act as an API that aggregates data from different sources. So in a sense, it works well in the context of Serverless cause it's not like you need to have any data stored in the function if it's someone else's API.

Ok sounds good, I guess there are no other good reasons the rest is just about the hype that's GraphQL and Serverless right? ;)

To create a Serverless function we first need a function app to put it in. To makes this as easy as possible we will be using VS Code and an Azure Function extension. So our prerequisites are:

As for the extension we need. Search for an extension called Azure Functions. It should look like the below: 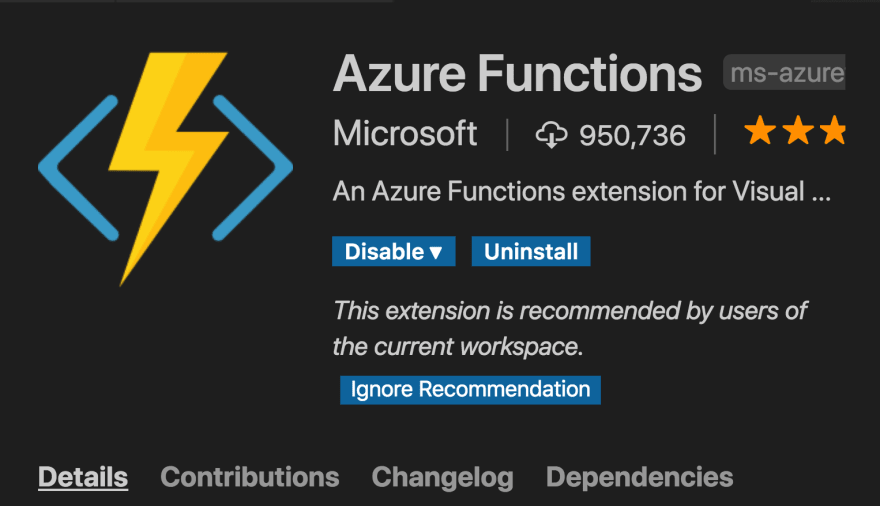 Hit CMD+SHIFT+P or choose View/Command Palette to bring up the command palette:

Now we need to type a command that will help us create a Serverless function app. It's called Azure Functions: Create New Project

Then it's going to ask you for what directory to create the app. The directory you are standing in is the default chosen one, select that.

Next thing it asks about is the language, select C#.

Next up it's asking you about the projects first function and how it should be triggered. Select HttpTrigger.

Now you need to provide a function name. Call it Graphql.

Next question is a namespace. You could really choose anything here but let's call it Function just for the sake of it.

Lastly, it asks about Access Right. There are different options here Anonymous, Function, Admin. We select Anonymous as we want to make our function publically available. The other options mean we would need to provide some kind of key when calling the function.

VS Code should now scaffold all the needed files. It should also ask you to restore all dependencies, to download the libraries. You could also run

if you should miss clicking on this dialog. 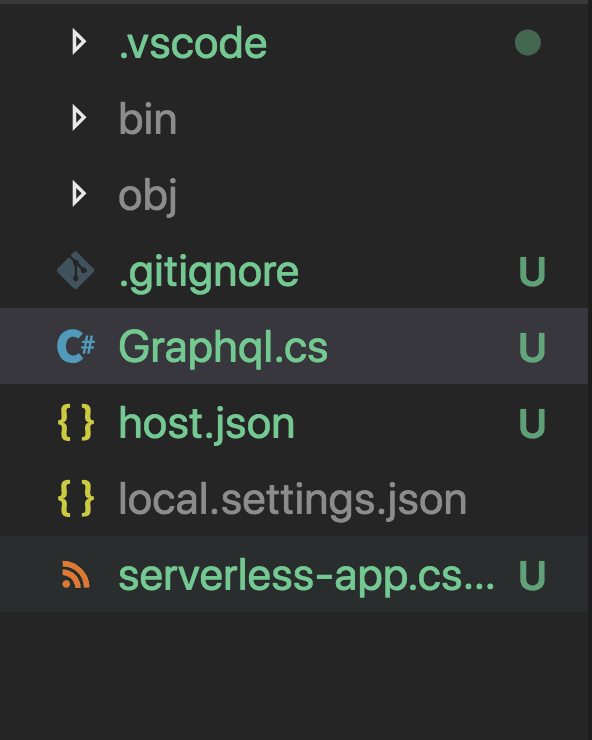 Let's ensure that we can run our newly scaffolded function. First, you should have been prompted if you want to add the necessary to be able to debug. You should answer YES here. This will generate a directory .vscode looking like the below: 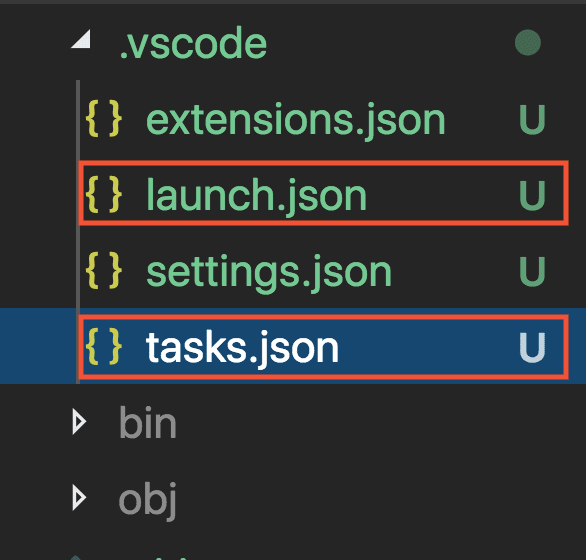 The tasks.json contains tasks needed to build, clean and run your project. These will assist you with the step we are about to do next Debugging.

To Debug we choose Debug/Start Debugging from the menu. It should compile the code and once done it should look like this:

It's telling us to go to http://localhost:7071/api/Graphql

Let's spin up a browser:

It's hitting our function Graphql. Speaking of which, let's have a quick look at the sample code we've been given when we scaffolded the Serverless app:

Let's not spend to much time understanding everything right now but suffice to say it does its job and is able to work with query parameters:

and the Body, in case you POST a request:

Ok, we established that we wanted to add GraphQL to our Serverless function. First, let's build a GraphQL API. Any GraphQL will contain the same moving parts:

This will be authored in something called GQL or GraphQL Query Language. Our schema will look like the following:

Now that's a lot. Let's explain what we are looking at.

Anything of type Query or Mutation is something we can ask for in our query to our API. The semantic meaning of Query is that you want to fetch data. In this case, we want to fetch a list of jedis using a query syntax like this:

This is equivalent to writing the following in SQL:

The other thing we do is supporting a query with a parameter, namely jedi(id: ID): Jedi. We call it like so:

This is equivalent to writing the following in SQL:

Everything queryable was defined under type Query. Everything else except for type Mutation are custom types that we define. For example:

This semantically means we will try to change the data. Looking at the operations we support:

We can see that we support adding, updating and removal.

To call a mutation we need to type like so:

Input, complex input for our Mutation

Note the input property input in addJedi(). If we look at the schema we can see that it's of type JediInput which is defined like this:

The reason we are using the keyword input instead of type is that this is a special case. Special how, you wonder? Well, there are two types of input parameters to a mutation:

so it's definitely possible to define a mutation looking like this:

So the million-dollar question is why can't I just use a custom type like Jedi as an input parameter type to my mutation?

The honest answer is I don't know.

Just remember this: If you need an input parameter that is more complex than a scalar, then you need to define it like so:

Ok next step is to set up this schema properly in code. For that we will create a file Server.cs and also install the GraphQL package like so:

Now add the following code to Server.cs, like so:

In the constructor above we set up the Schema by calling Schema.For() with a string representing our schema expressed as GQL. The second argument of that won't compile though, namely this part:

The reason is it won't compile is that Query and Mutation don't exist yet. They are simply resolver classes answering to query and mutation requests. Let's make it compile by creating first Db.cs and a file Query.cs

Db.cs is nothing more than a simple in-memory database.

Adding a resolver class to handle all Queries

What's interesting about the above is how we map something in our GraphQL schema to a resolver function. For that we use the decorator GraphQLMetadata like so:

The above tells us that if the user queries for jedis then the function GetJedis() will respond.

Dealing with parameters is almost as easy. It's the same decorator but we just add input parameter like so:

Adding a resolver class to handle all Mutation requests

We are almost there but we need the class Mutation.cs and let's add the following content to it:

As you can see it looks very similar to Query.cs, even with parameter handling.

There's just one piece left of the puzzle, namely our serverless function. It needs to be altered so we can support the user to invoke our function like so:

Change the code in Graphql.cs to the following:

Test it all out

To test it we just start debugging by choosing Debug/Start Debugging from the menu and change the URL in the browser to:

Let's see what the browser says: 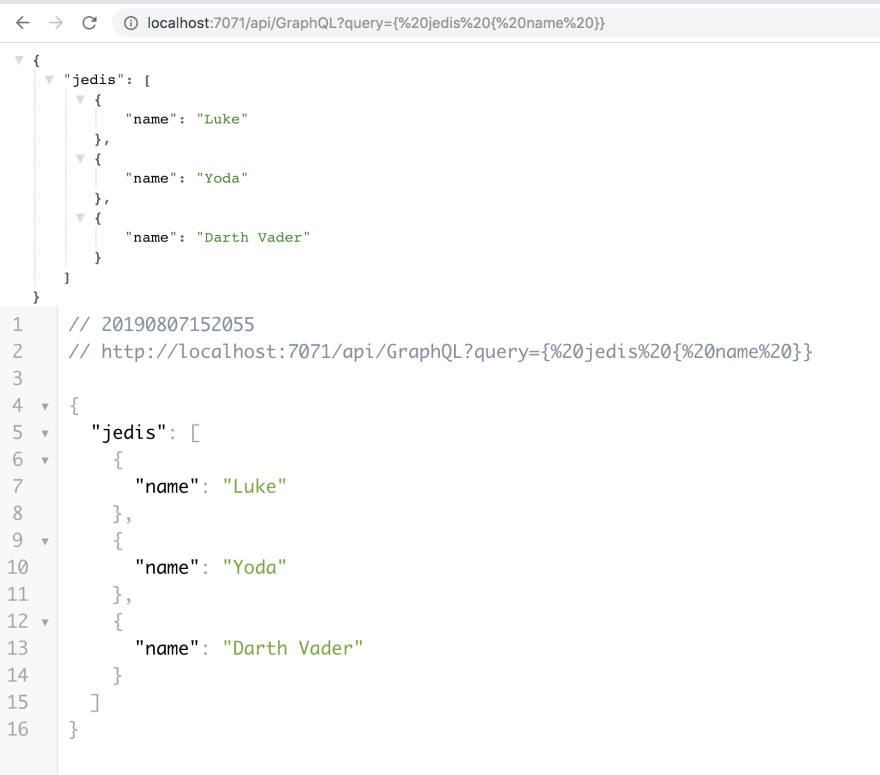 Yep, we did it. Serverless function with a GraphQL API.

Now. One of the great things about GraphQL is that it allows us to call other APIs and thereby GraphQL acts as an aggregation layer. We can easily achieve that by the following steps:

We can easily do HTTP request in .Net with HttpClient so let's create a class Fetch.cs like so:

Now open up Query.cs and add the following method to the Query class:

Additionally, we should be installing a new NuGet package:

This is needed so we can convert the JSON response we get into a Poco.

We should also add types Planet and Result to Query.cs, but outside the class definition:

Update our schema with the new type

We have the schema left to update before we can try it out. So let's open up Schema.cs and make sure it now looks like this:

Above we've added the type Planet:

That should be it, let's test it. Debug/Start Debugging: 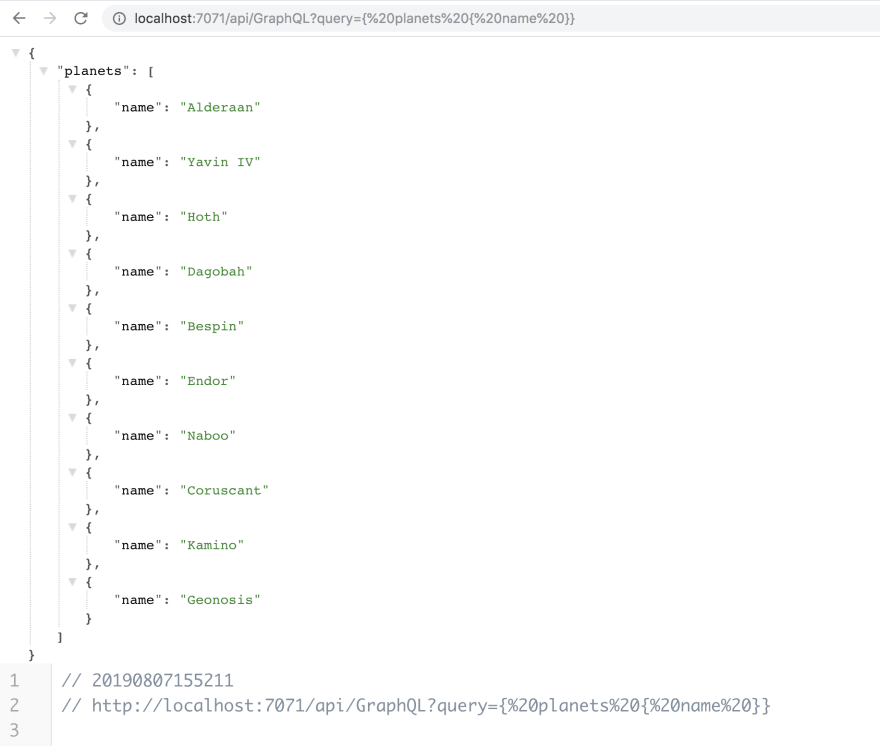 We've managed to do an external call to an API and make that part of our GraphQL API. As you can see we can intermix data from different sources easily.

We've managed to create a GraphQL that supports the full CRUD. That is we support both querying for data but also creating, update and delete.

Finally, we added our GraphQL API to be served by our Serverless function.

As an added bonus we also showed how we could take to external APIs and make them part of our API. That's really powerful stuff.

I hope you enjoyed this article. In out next part we will take a look at how to add GraphQL to a Web API project in .Net Core.