Have you ever found yourself doing something that looks similar to this pattern?

Lots of use-once temporary variables. I used to do this too. I'd come up with creative ways to name those variables to sort of "self-document" what was happening. But it's generally a bad idea, here are some reasons why:

But what should we do instead? Clearly this isn't going to be easy code to work with:

While ugly, the code above does show that it is possible to express this transformation as a series of function calls with no variables. The output of one function is the input of the next function, and so on. We want to pipe values between functions. One solution is to write a function that allows us to make this abstraction. So how do we do this?

Here is one solution using reduce:

As you can see, this function takes an initialValue and uses reduce to feed the output of one function into the input of the next one. If you are not sure why I use reduce here, part I of my reduce tutorial may be helpful. Now we can refactor the original code like so:

Isn't this much cleaner? It is easy to see how data flows from top to bottom.

There are two common challenges some developers may have with this style:

We will address these questions here:

There is a way to express this function using a self-referencing type, but that is complex and warrants a separate article. For those who are curious, this is what such a type would more or less look like:

Alternatively, we can simply use TypeScript's function overloading to express how the type should evolve. For example:

This is essentially how pipeline works in my library Soultrain.

Soultrain is a compact functional library written in Typescript.

Please note that this library is still experimental and there will be breaking changes. If you are kicking the tires on this within another experimental project, it is best to lock it down to a specific version.

Soultrain is a compact functional library written in Typescript. It is inspired by Ramda and container-style programming based Algebraic Data Types.

Ramda is a great tool, however, it relies on JS DOC comment specifications to provide type data. While this is good, Typescript provides superior static-typing. Thus this library aims to provide general purposes functional tools with much better static-typing.

This section will be completed later. From a high-level, the library provides smart curry, pipe, and pipeline functions with good type support. It currently provides two Monads, a Maybe and a Transduce. The former works similar to other Maybe libraries, however, it provides…

The benefit of the typed version is getting the compiler to double-check the code. Here is an example that the JavaScript version would not catch: 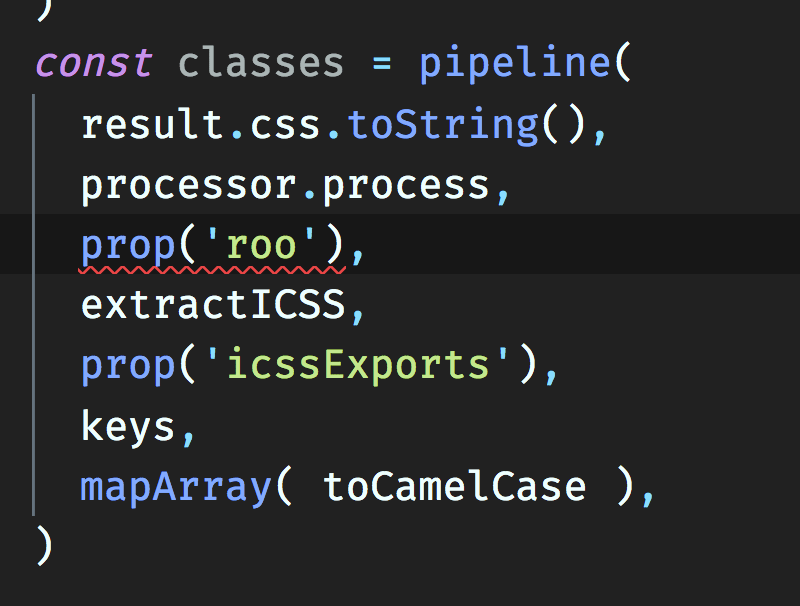 The compiler has noticed that roo is not a property on the object returned by processor.process

To log data flowing between the functions in the pipeline, one could simply use a log function that both logs and returns the data it receives. With types it could be written as such:

Which can be used thus:

As an exercise for the reader, one could also create a function that conditionally triggers the debugger.

The pipeline function, the eager sibling of pipe and compose, will invite you to write more functions. It will also demonstrate to you how powerful currying can be; and even inform you on the order your function parameters should be.

To illustrate this, notice the arrow function in our pipeline example. Isn't obj a single-use variable? All we're using it for is as a placeholder for our data... just a few character to the right!

Turns out that by making sure our source data is the last parameter and by using curried functions, we can simplify our code even further. Below I've written how this could be expressed in vanilla JS--notice that we want to override keys for the incoming object. It will be the second parameter--thus moving from left to right, overriding the second object, obj2, with the object in the first parameter, obj1.

So instead of placing obj2 to the right of the object spread, we reverse the order and place it on the left:

If you're unfamiliar with curry, it basically modifies our function so that it can be used as if it were also written this way:

Piping encourages us to write small, re-usable functions that perform specific tasks and that take the source data as the last parameter. This is similar to commands on the UNIX or Linux terminal. It's a functional programming concept that has been around for a long time. And like a great classic, it is a principle that proves itself better with time.

Piping data between functions is a great alternative to creating single-use variables which are only used to pass data from one function to another. Many programming languages recognize this and have an operator to perform this task. For JavaScript, there is the proposed pipeline operator

A proposal for adding the simple-but-useful pipeline operator to JavaScript.

This proposal introduces a new operator |> similar to F# OCaml Elixir Elm, Julia, Hack, and LiveScript, as well as UNIX pipes and Haskell's &. It's a backwards-compatible way of streamlining chained function calls in a readable, functional manner, and provides a practical alternative to extending built-in prototypes.

Those proposals are as follows:

Babel plugins for both are already underway to gather feedback.

Which would allow us to rewrite our original example like this:

Until then, we can benefit from using the pipeline function today to avoid unnecessary variable declarations.

Once suspended, babak will not be able to comment or publish posts until their suspension is removed.

Once unsuspended, babak will be able to comment and publish posts again.

Once unpublished, all posts by babak will become hidden and only accessible to themselves.

If babak is not suspended, they can still re-publish their posts from their dashboard.

Once unpublished, this post will become invisible to the public and only accessible to Babak.

Thanks for keeping DEV Community 👩‍💻👨‍💻 safe. Here is what you can do to flag babak:

Unflagging babak will restore default visibility to their posts.