There are two main categories of database in use in the development world today, commonly referred to as SQL and NoSQL. In this article, we will compare an SQL vs. NoSQL database based on their pros and cons.

SQL, or Structured Query Language, is the universally known query language for relational databases. SQL databases make it simpler to work with structured data in a database through CRUD operations. CRUD stands for create, retrieve (or read), update, and delete – the primary operations for manipulating data.

As of May 2021, five of the top six database systems according to the DB-Engines ranking are relational databases, including the top four – Oracle, MySQL, Microsoft SQL Server, and PostgreSQL. 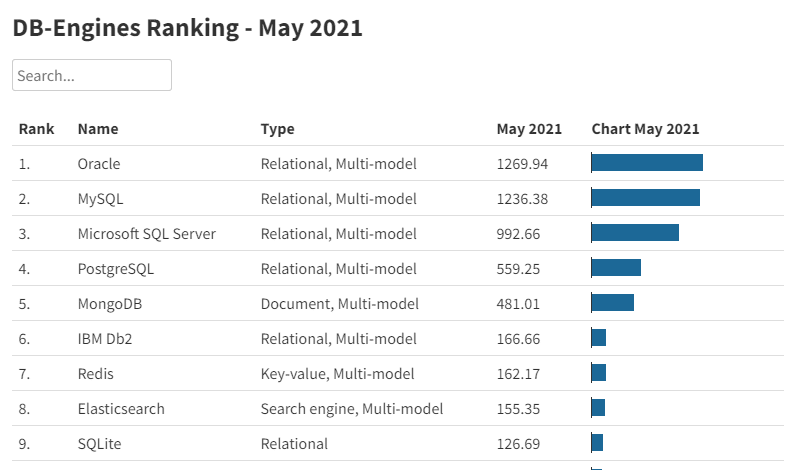 In this article, we will take a deep dive into the pros and cons of SQL and NoSQL databases.

Broadly speaking, SQL databases require more advance preparation and planning of the relational model, but the benefit is that your data will be consistent and clean. The relational model represents how data is stored in the database, such as how each table is structured and related to other tables.

Although SQL databases with standardized schema and relational databases are typically more rigid and difficult to modify, they still have many benefits. Every data object added to the database must conform to the recognized schema of linked tables (comprising rows and columns). While some could find this restrictive, it is essential for data compliance, integrity, consistency, and security.

A large number of users

SQL is an established programming language that is very widely used. It has a large user community comprising countless experts vast in well-established best practices. Developing a strong working knowledge of SQL can give application developers numerous opportunities to consult, collaborate and sharpen their skills.

SQL databases are ACID compliant (described in detail below) thanks to how relational database tables are precisely structured. This helps ensure that tables are in-sync and transactions are valid. It is the best choice when running applications with no room for error. An SQL database supports a high data integrity level. 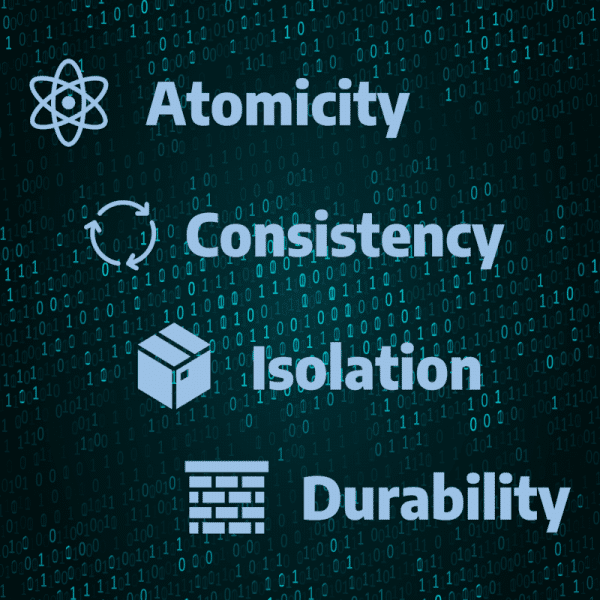 Requires little to no code

SQL is a developer-friendly language. It uses plain English, making it easy to learn to manage and query any relational database while using only simple keywords without coding.

Backendless Database queries, for example, can be written using SQL. Additionally, SQL terminology is used to craft precise API calls to access and modify data. Using Database Views, you can create these queries visually, making it even easier for those without a background in writing SQL queries.

SQL databases have historically required that you scale up vertically. This meant you could only expand capacity by increasing capabilities, such as CPU, SSD, and RAM, on the existing server or by purchasing a larger, costlier one.

As your data continues to grow, you’ll invariably need to constantly increase hard drive space and require faster and more efficient machines to run newer and more advanced technologies. With this, hardware can quickly become obsolete.

Of course, utilizing a serverless hosting service such as Backendless can alleviate the scaling concern. The Backendless system is designed to manage scaling automatically for you, so that you don’t have to worry about physical server management while achieving database efficiency at scale.

A traditional relational model, or schema, of a SQL database has to be defined before use. Once this is done, they become inflexible, and any adjustment can become resource-intensive and difficult. Due to this, significant time should be invested in planning before putting the database into production.

With Backendless, however, developers can always modify schema even after their app is launched. New tables and columns can be added, relations established, etc., providing greater flexibility than a traditional SQL database. This makes the Backendless system well suited for early product development as you are not locked into a schema at the beginning of the development process.

The goal behind the development of relational databases is to negate data duplication. There is different information for each table, and this information can be queried and connected using common values. But, when SQL databases become large, the joins and lookups needed between several tables can slow things down considerably.

To put more simply, relational databases commonly store related data in different tables. The more tables storing data needed for a single query, the more processing power is needed to complete that query without the system slowing down significantly.

As previously mentioned, vertical scaling-up of SQL databases is done by expanding hardware investment. This is costly and time-consuming to do on your own. Some organizations try to scale up horizontally through partitioning. However, this further complexity increases the resources and time expended. It will likely involve coding and require highly-skilled, well-paid developers.

Systems like Backendless, however, are designed to manage the scaling process for you automatically. This is often referred to as infrastructure as a service, or IaaS, and is far less expensive than managing infrastructure yourself. IaaS providers handle the difficult tasks of server maintenance and resource allocation for you so that you can focus on building a great product without worrying about what will happen when your database grows.

NoSQL queries are denormalized. Therefore, with no fear of data duplication, all the needed information for a specific query is often stored together. This means that joins are not required. As a result, lookups are easier when dealing with large volumes of data. NoSQL is very fast for simple queries.

For a NoSQL database, data is distributed across different regions and multiple servers, implying no single failure point. This makes NoSQL databases more resilient and stable, with zero downtime and continuous availability.

This database gives developers enough flexibility to help improve their productivity and creativity. They are not bound by rows and columns, and their schemas do not have to be predefined. They are dynamic such that they can handle all data types, including polymorphic, semi-structured, structured, and unstructured.

Application developers can just come in and start building a database without needing to spend effort and time on planning upfront. It allows for quick modifications when there are changes in requirements or a new data type needs to be added. This flexibility makes this database a perfect fit for companies with varying data types and constantly changing features.

It is cost-effective to expand the capacity as a NoSQL database scales up horizontally. Instead of upgrading costly hardware, the difference with this database is that you can expand cheaply by simply adding cloud instances or commodity servers. Also, many open-source NoSQL databases offer cheap options for many companies.

There is no fixed language for conducting NoSQL queries. There is variation in the syntax used in querying data for different NoSQL database types. Unlike SQL, where there is only one language to learn, NoSQL has a higher learning curve. Similarly, it can be more difficult to find experienced developers with knowledge of the NoSQL system that you have implemented. Thus, it is more likely that you will need to train new hires, increasing onboarding time and cost.

Querying isn’t very efficient due to the numerous data structures present in NoSQL databases. There is no standard interface to perform complex queries. Conducting simple NoSQL queries might even require programming skills due to the structure of your data. As a result, costlier and more technical staff might be needed to perform the queries. This is one of the major NoSQL limitations, particularly for less technical (i.e. no-code) developers.

A smaller number of users

Developers are now starting to use NoSQL databases more and more and are quickly becoming a growing community. However, it is still not as mature as the SQL community. Also, with fewer experts and consultants, it could be more difficult to solve undocumented issues.

Data is quickly available thanks to the distributed nature of the database. However, it could also be harder to ensure that the data is always consistent. Sometimes, queries might not return updated data or accurate information. The distributed approach makes it possible for the database to return different values consecutively, depending on the queried server.

This is a major reason why NoSQL is not ACID-level compliant. “C” – Consistency implies that data must be consistent and valid at the beginning and completion of a transaction. Rather, many NoSQL databases are BASE compliant, where “E” signifies Eventual Consistency. NoSQL places importance on availability and speed over consistency. Inconsistency in data retrieval is one of the major drawbacks of NoSQL databases.

Both SQL and NoSQL databases are used in meeting specific needs. Depending on the goals and data environment of an organization, their specific pros and cons could be amplified.

A common misconception is that it is bad to use both technologies together; as a matter of fact, you can use both together, such that each database type play to its strengths. Many companies use both databases within their cloud architecture. Some even use it within the same application.

In the end, it is all about weighing your options and going with the preferred choice that best suits your needs.

Thanks for reading, and Happy Codeless Coding!

Creating data specifically for each user in React / Node.js

Bitemporality, or how to change the past

Backendless
Full-stack no-code app builder featuring UI Builder, Codeless logic and APIs, realtime database, and much more.
Redis: What It Is, What It Does, and Why You Should Care
#redis #webdev #opensource #database
How To Integrate A Bubble App With A Backendless Backend
#tutorial #devops #codenewbie #database
Backend and Real-Time Database For Flutter Web And Mobile
#flutter #webdev #devops #database

Once suspended, backendless will not be able to comment or publish posts until their suspension is removed.

Once unsuspended, backendless will be able to comment and publish posts again.

Once unpublished, all posts by backendless will become hidden and only accessible to themselves.

If backendless is not suspended, they can still re-publish their posts from their dashboard.

Once unpublished, this post will become invisible to the public and only accessible to Backendless.

Thanks for keeping DEV Community 👩‍💻👨‍💻 safe. Here is what you can do to flag backendless:

Unflagging backendless will restore default visibility to their posts.