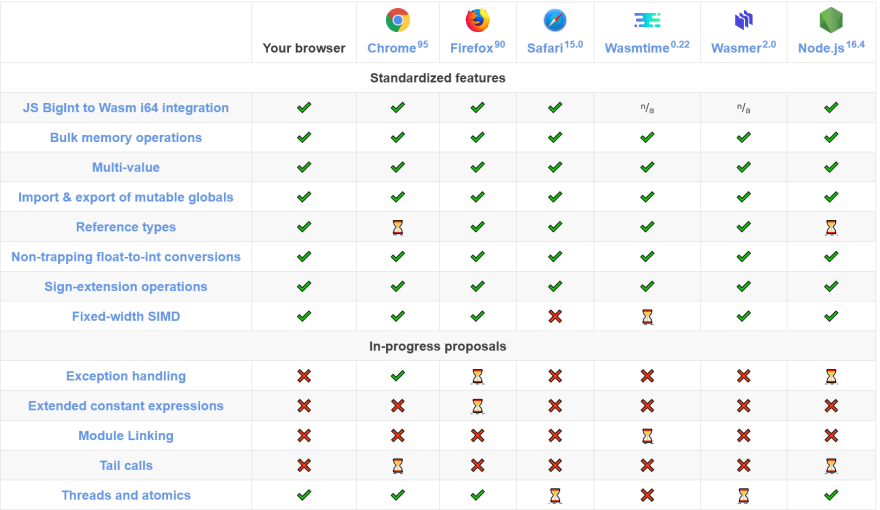 The idea of writing non-JavaScript code and having it run on the browser was previously explored through Asm.js, which would compile the source code into JavaScript. However, performance of Asm.js apps was about half of the native implementation. Even though Mozilla Firefox first launched support for Asm.js back in 2013, version 1.0 has yet to be released. Mozilla's Asm.js engine was called OdinMonkey. Asm.js required code to be compiled ahead of time.

WebAssembly launched March 2017 and has largely replaced Asm.js, and as of this writing, over 94% of all web browsers support it. Some traditionally desktop only apps have already been brought to the browser with WebAssembly, like the game engine Unity, AI and ML library TensorFlow.js, AutoCAD's suite of software, and you can find more here. However, it still seems to be a rarity at this point, largely due to lack of exposure. Popular adblocking software uBlock Origin was rewritten with WebAssembly to be even more performant, see the below screenshot for a benchmark comparing JS and WASM implementations.

There are over 40 supported languages for WASM, while the initial focus was on C/C++ and Rust. Using Emscripten as the compiler, code can be easily compiled to WebAssembly

From the desktop to the browser and back again

Not a JavaScript Replacement

While whole apps can be made with WASM, it does not have the ability to manipulate the DOM. So the idea is that most of the app can be made with WebAssmebly, and JavaScript will be used to fill in the gaps between functionality. This gives WASM apps the near native performance while still able to dynamically modify the site with traditional JavaScript methods.

WebAssembly will allow for complex apps to be brought to the web, increasing accessibility and reach. WASM does not care about the user's OS or require additional plugins to run. WebAssembly has the joint support of W3C, Mozilla, Microsoft, Google, and Apple, so it's not going away anytime soon, and should only see more adoption. WebAssembly will allow more developers write highly performant web apps and make browsing the web a richer experience.

Once suspended, badams92 will not be able to comment or publish posts until their suspension is removed.

Once unsuspended, badams92 will be able to comment and publish posts again.

Once unpublished, all posts by badams92 will become hidden and only accessible to themselves.

If badams92 is not suspended, they can still re-publish their posts from their dashboard.

Once unpublished, this post will become invisible to the public and only accessible to Ben Adams.

Thanks for keeping DEV Community 👩‍💻👨‍💻 safe. Here is what you can do to flag badams92:

Unflagging badams92 will restore default visibility to their posts.