I remember hearing about Hanami framework for the first time. It was a few years ago, during a talk on Wroclove.rb conference. It didn't really catch my attention back then as I was still a newbie in the Ruby world. I was 100% focused on learning Rails and didn't wanna cognitively overload my brain with concepts from yet another framework.

Now, after all these years spent working with Rails I got a little burnt out and thought that it's a hight time to get my hands dirty with something completely new. Having the old wroclove.rb talk in mind I decided to learn Hanami. My favorite way of learning is by doing, so I started a pet project called flashcard-genius. The purpose of the app is helping me with learning Italian words. It lets users create, share and memorize sets of flashcards.

After around 2 months of more and less frequent after-hours development I managed to create a prototype (can be found at http://flashcard-genius.com). Even though it's a basic server-renderered CRUD-like application it already forced me to learn a full variety of Hanami concepts and overcome multiple roadblocks. 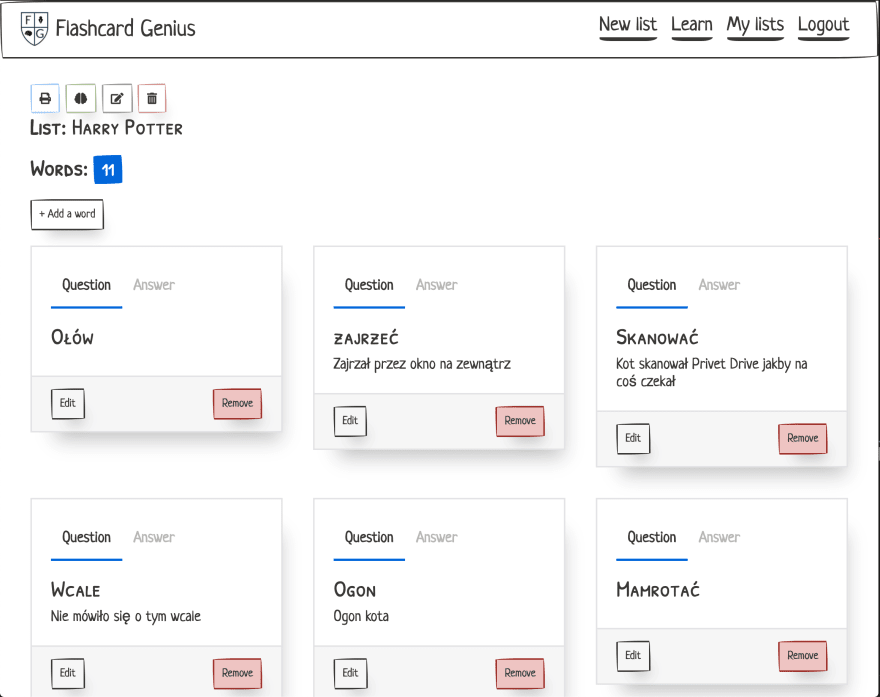 Why should you use Hanami at all?

Hanami was started by Luca Guidi as a counterproposal to Rails. The main idea was to build a secure, feature-rich web framework that follows clean architecture principles and relies on "battle tested" libraries like Sequel, Rack and dry-rb gems.

Sounds tempting, right? Well, to me it did. Especially because our beloved Rails are often criticized for having become too complex and breaking some of the best practices (e.g. it mixes domain and data-access layers).

One potential benefit of Hanami might be also memory usage. Hanami may be much less memory-consuming and faster (even ~5x) (https://rpanachi.com/2016/03/28/from-rails-to-hanami-part1-container-architecture-model-views-assets)

Setting up a Hanami application was really simple. The getting started page explains how to:

That good first impression was really important for me, because seeing things work out-of-the box motivated me to continue learning more complex concepts in order to achieve the desired functionalities for my app.

Hanami project is a "microlith"

Hanami can have multiple apps per project - it helps with later extraction. Also the domain has its own separate "lib" folder.

Entities, repositories, validation objects and interactors instead of fat models

Hanami attempts to prevent developers from making the same mistakes as they tend to do in Rails.

As I mentioned before in order to query/manipulate the data in Hanami you have to use repository classes. Hanami developers decided to incorporate another top-notch gem called Sequel for database communication so you can use all the goodies provided by Jeremy Evans.

One of the things I liked in Hanami repositories is that when I declare an association, that repository does NOT get any extra methods to its public interface. This is because Hanami wants to prevent to bloat in repositories by adding methods that are often never used.

There are also a few niceties that I haven't used yet but may come in handy in the future:

Templates are backed by View classes that can implement the methods that in Rails would be implemented by global helpers. This prevents the ERB templates from being bloated with logic which is quite hard to test.

That's obvious - Hanami is a much smaller project than Rails, so there's much less gems, guides dedicated to Hanami on the web. Also many 3rd party services have SDKs prepared specially for Rails so in order to run them with Hanami sometimes you have to spend some additional time.

Guides are sometimes too basic

Guides cover only very basic use cases. A lot of knowledge is spread on discourse forum/gitter chat/stack overflow. Docs could be improved a bit. They could e.g. guide how to prepare a simple CRUD. Often I had to read some random posts to understand how to achieve sth.

Also the fact that some great gems are incorporated into Hanami sometimes is a curse, because you have to understand what APIs are based on what gems and then dig into the gem's code/documentation to understand how to achieve the thing that you want.

Using the repositories is painful sometimes

Maybe I haven't spent enough time with Hanami repositories and Sequel yet, but I didn't really see a simple way of DRYing the parts of queries, so I ended up writing query methods having many parts in common.

I also remember struggling with writing a repository method that'd return an additional column based on GROUP BY clause. It took me quite a while to solve it. It'd be cool if the docs included a bit more complex usage examples like this one.

I must admit that even though I really liked using Hanami I'd probably not suggest starting/converting any bigger app to Hanami unless you want to spend lots of time on forums/chats and solve problems that had already been solved in Rails ecosystem.

Still, I really admire all the ideas and work put by the creators of Hanami and I'm still gonna develop my side project with that framework. Thank you guys!

8 Design Principles that every Ruby Developer should know

Thanks for keeping DEV Community 👩‍💻👨‍💻 safe. Here is what you can do to flag bajena: