In this post, I will reproduce the issue and show you that this is a feature of AWS Security Groups and not a bug. 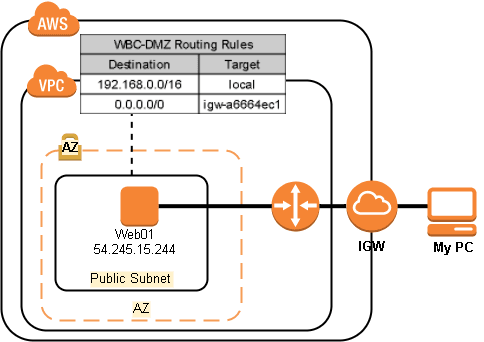 There are no inbound Rules for Security Group WBC-Web.  No traffic will be permitted

Even though this EC2 instance has a Public IP, no inbound traffic should reach this instance since this instance is associated the Security Group WBC-Web with no Inbound Rules.

From my home computer, if I ping the EC2 instance, I will receive a “request time out.” message

There is no response since the Security Group has no inbound rules.

In AWS console, I added the inbound rule to Security Group WBC-Web to allow ping from all IP addresses.

Now if I try to ping the EC2 instance, I will receive a response.

If I remove the Security Group inbound ping rule, I continue to receive a response, which I do not expect. I expect the ping should timeout.

To demonstrate this, I will run ping with the -t option. This will keep ping running until I cancel it manually.

I will start the ping before I remove the ping rule. 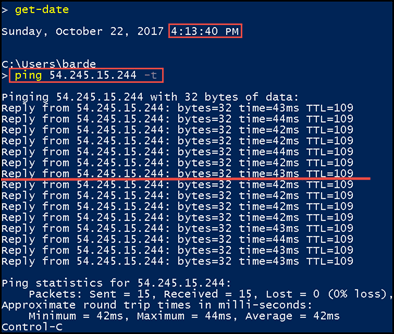 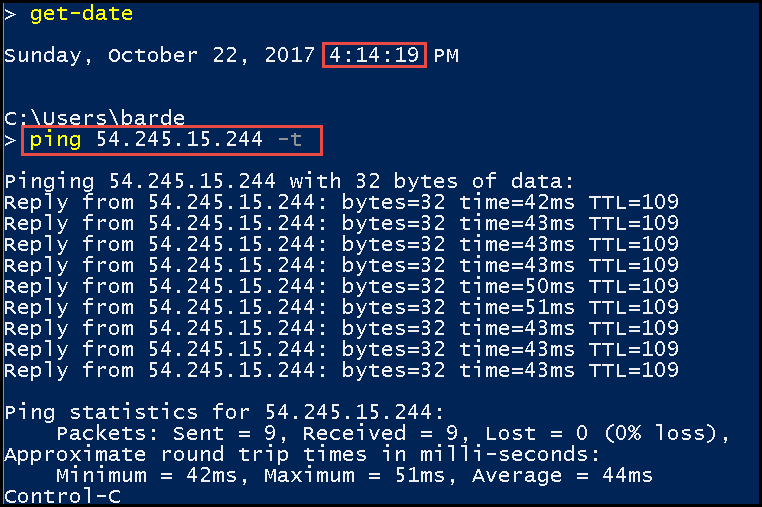 I stop the ping again and waited a minute before starting it again. This time the ping finally timed out.

So What’s Going On

When there’s a flow of traffic, for our example a ping, and the security group inbound rule is removed, the flow of traffic will not be stopped by the removal of the inbound rule.  The traffic is interrupted when it’s stopped on the client or the host for at least a few minutes.

Removing the ping inbound rule while traffic is flowing will not interrupt or stop the flow of traffic. You must first stop the ping on the client or host and wait at least 1 minute before the removal of the inbound rule will take affect.

I believe Amazon does a better job of describing this.

An existing flow of traffic that is tracked may not be interrupted when you remove the security group rule that enables that flow. Instead, the flow is interrupted when it’s stopped by you or the other host for at least a few minutes (or up to 5 days for established TCP connections). For UDP, this may require terminating actions on the remote side of the flow. An untracked flow of traffic is immediately interrupted if the rule that enables the flow is removed or modified. For example, if you remove a rule that allows all inbound SSH traffic to the instance, then your existing SSH connections to the instance are immediately dropped.

It’s important to understand that if the traffic is being tracked and is flowing then removing an allow rule will not stop the traffic.

The following are a few way to stop the traffic.

While learning about AWS Security Groups, I ran into this situation and was very confused. It took a lot of digging to understand what was going on.  I hope that this will help others and that others will not go through the pain I went through.

This does not seem relevavent to SSH connections.  As soon as I remove an SSH inbound rule the SSH connection is terminated.  I assume SSH and RDP rules would function similarly.

The post Why Removing a AWS Security Group Rule Does Not Stop Traffic Flow appeared first on Mike Barlow (BarDev).

Once suspended, bardev will not be able to comment or publish posts until their suspension is removed.

Once unsuspended, bardev will be able to comment and publish posts again.

Once unpublished, all posts by bardev will become hidden and only accessible to themselves.

If bardev is not suspended, they can still re-publish their posts from their dashboard.

Once unpublished, this post will become invisible to the public and only accessible to Mike Barlow.

Thanks for keeping DEV Community 👩‍💻👨‍💻 safe. Here is what you can do to flag bardev:

Unflagging bardev will restore default visibility to their posts.