Synology DS218 DiskStation -- Versatile 2-bay NAS for small offices and home users is a Linux device. It runs a Linux distro named DSM, and the version on my device is 7.1-42661 Update 1.

There're so many different Linux flavours. During my research on this topic, I realised I'll have some difficulties. And I did. I have not found a complete guide on how to do this, the steps that work for me, which I've put together in this post come from several other existing posts, I'm listing those referenced posts along the way.

I'd like to mention that, following the instructions in this post How Do I use Synology Web Station?, I've successfully got a PHP port-based virtual site hosted by Apache 2.4 to run in under 30 ( thirty ) minutes -- and I can access it from my Windows 10 machine. Python, somehow is not that straightforward.

“behai” is the user I set up when first installed DSM. This is not the root user.

SSH to DSM from Windows 10

From a Windows command prompt, we should now be able to access DSM command line via SSH, using:

After logging into SSH terminal, both commands:

will return the same value, which is the home directory, mine is:

From Package Center under Installed, it shows Python2 comes pre-installed ( when we first installed
DSM ).

I thought I would need Web Station, in hindsight, however, at this stage, I don't think I need Web Station yet, but I did install it. So I will just go ahead and include this step in this post.

To start off, I follow the instructions in How Do I use Synology Web Station? to install Web Station, PHP 8.0, set up aPHP port-based virtual site hosted by Apache 2.4, and I was able to get this virtual site to run in under 30 ( thirty ) minutes -- and I can access it from my Windows 10 machine.

Basically, use Package Center to install Web Station. The installation will create a web root directory:

At this point, I thought, similar to PHP, I would need to carry out the same process for Python: 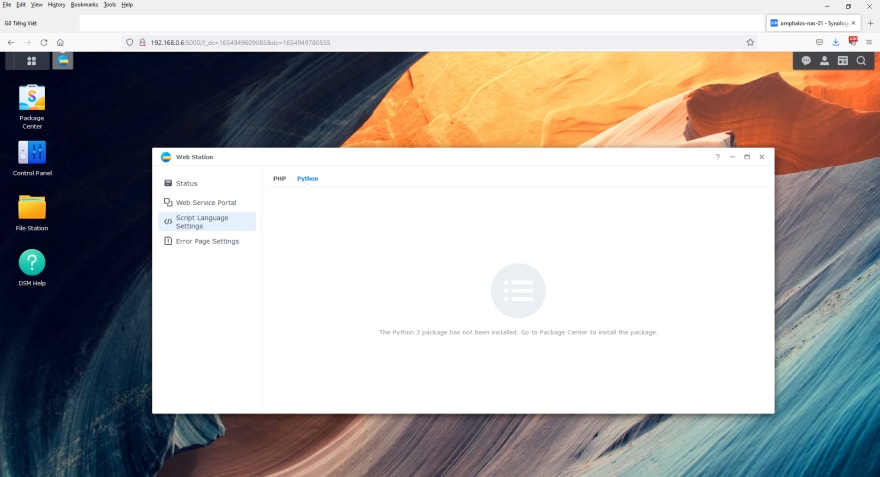 Python 3.8.12 has been installed, but it still said no Python 3 package. Use Package Center to install Python 3.9 Beta. Click on “Join Beta” to install. See screen capture below: 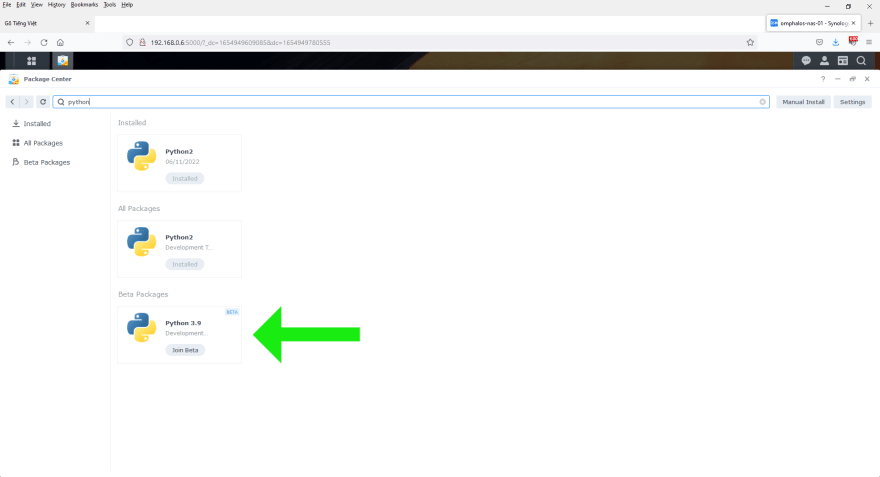 After this a User-defined customised profile for Python 3.9 should appear under Web Station's Script Language Settings.

Where is Python 3.9 Beta installed, how do I invoke it?

This post Re-Install pip and virtualenv Site Packages After Package Center Python 3.8.2 Upgrade, is a bit outdated ( I think ), but it helps me to figure out where Python 3.9 is installed:

is where Python 3.9 related tools live. This path is recognised by the system. Command:

Install pip, upgrade pip, and verify pip has been installed

I tried various instructions, they did not work. This https://jackgruber.github.io/2021-06-27-install-pip-on-synology/ post works. I changed to python3.9: 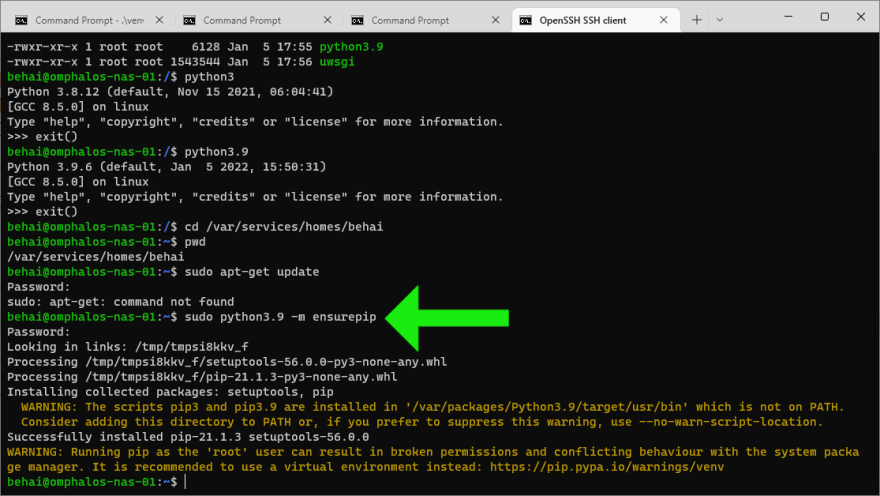 WARNING: Running pip as the 'root' user can result in broken permissions and conflicting behaviour with the system package manager. It is recommended to use a virtual environment instead: https://pip.pypa.io/warnings/venv

I don't know what it means yet. As for the warning:

WARNING: The scripts pip3 and pip3.9 are installed in '/var/packages/Python3.9/target/usr/bin' which is not on PATH.
Consider adding this directory to PATH or, if you prefer to suppress this warning, use --no-warn-script-location.

I've not taken any action yet... I'll be using the full path initially.

To upgrade pip, I ran the following command:

I'm also just sleeping on the warnings for the time being, till something stops working.

Verify pip has been installed

**I HAVE TRIED VARIOUS COMMANDS, but none has worked. I don't know how to do this presently**. I'll post an update after I have figured it out.

I included pip, which was unnecessary as it has already been done.

I included the full path for python3.9, which I don't think is necessary.

Verify virtualenv has been installed

To verify, run this command:

See the screen capture below, virtualenv has been installed: 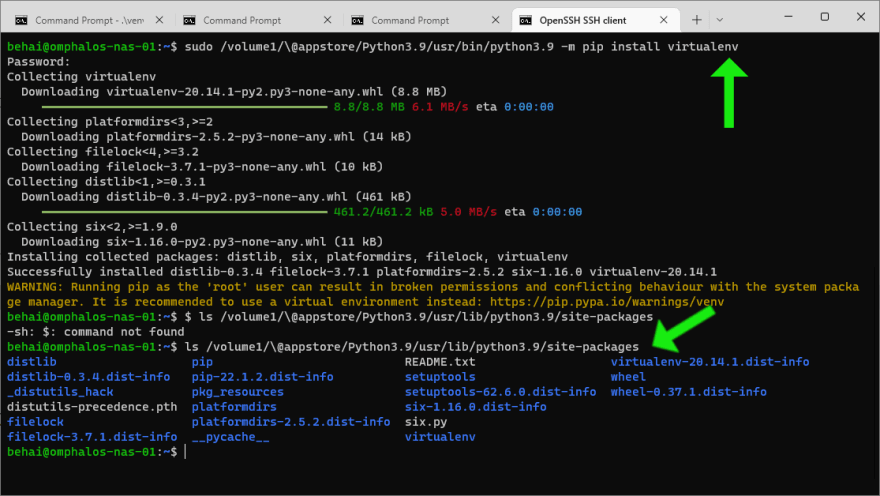 The bin directory is where related executables live:

Please see the output in the screen capture below:

Then go to this directory:

Issue the below command to create virtual environment venv:

-- We can also see the content of these directories using File Station.

The running of these commands is shown in the screen capture below: 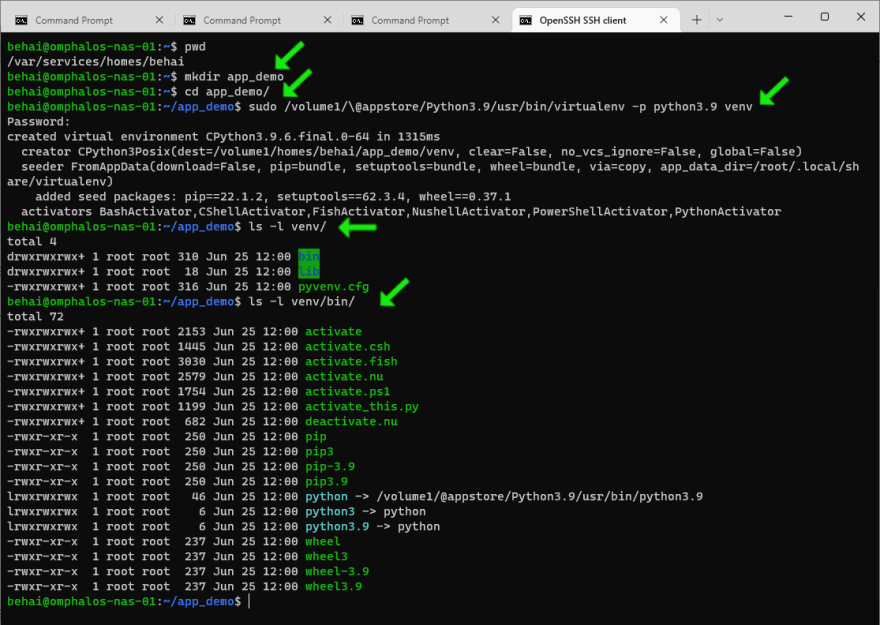 Please note, in Windows, venv\Scripts\ is the equivalence of venv/bin.

The prompt changes as seen in the screen capture below:

**I DON'T KNOW HOW TO DEACTIVATE IT YET. I'm not sure what venv/bin/deactivate.nu is for. I can't find info on it either**. I just terminate the SSH session, get back in, and it still works.

Run the command below to install packages for the test application that we are going to write:

This should run with no problems. After finished, use File Station to scan through the directories to verify that we have the specified packages installed.

Now create the rest of the application:

The application responds as expected: 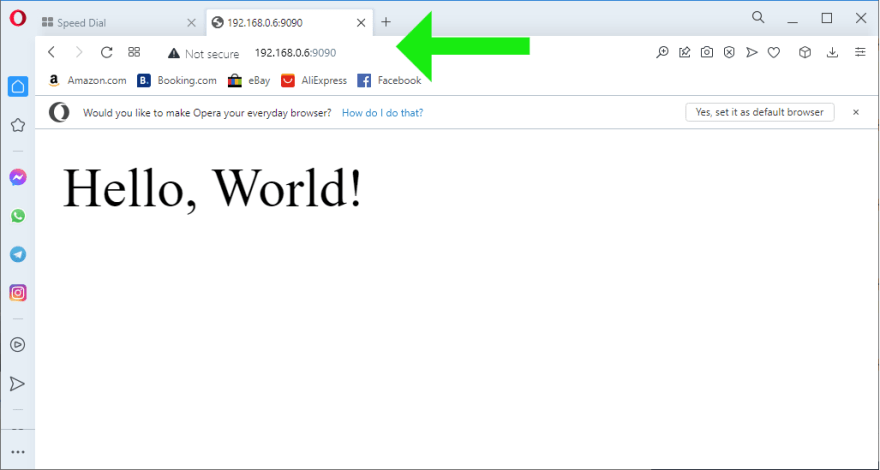 This's been an interesting exercise. I've learned a lot along the way. What I really want to achieve is to get the DSM Apache 2.4 web server to hostPython web applications in a similar manner as Internet Information Services (IIS) -- which I've done and described in Python: hosting a virtualenv Flask application in Windows 10 Pro's Internet Information Services (IIS). I'll continue to work towards this objective, I'll do another post after I've learned how to do it, and do it successfully.

Thank you for reading, and I hope you find this post useful.

Be Hai Nguyen
I have been a software develper for around 20 years. I am looking forward to work with Python. My other blogs: https://behainguyen.wordpress.com/ https://behai-nguyen.github.io/
Python: the !r string format and the __repr__() and __str__() methods.
#python #format #repr #str
Python: Flask, dictionaries as JSON objects ready to be used by JavaScript.
#python #flask #dictionary #json
Python: SQLAlchemy extracting column names and data from a MySQL stored procedure returned dataset.
#python #sqlalchemy #storedproc #column

Once suspended, behainguyen will not be able to comment or publish posts until their suspension is removed.

Once unsuspended, behainguyen will be able to comment and publish posts again.

Once unpublished, all posts by behainguyen will become hidden and only accessible to themselves.

If behainguyen is not suspended, they can still re-publish their posts from their dashboard.

Once unpublished, this post will become invisible to the public and only accessible to Be Hai Nguyen.

Thanks for keeping DEV Community 👩‍💻👨‍💻 safe. Here is what you can do to flag behainguyen:

Unflagging behainguyen will restore default visibility to their posts.