Hi! I’m Ben Greenier — I’m an engineer at Microsoft working to create awesome open source projects with our partners. We get to create software to help solve really tricky problems, and share our stories as we go. This means that as part of my job I get to play with lots of new technologies, learn how to use them, and help other folks do the same.

Lately I've been working on a browser app called Overlayed - it helps broadcasters interact with their viewers in new ways, using overlays. Under the hood, Overlayed is powered by user-defined modules (using ESM), that export React components. You can learn more about that, here - but it's not what this post is about.

While working on getting things ready to import remote modules, I've been investigating replacing shared dependencies with a single version. For instance, since all remote modules will depend on React, I want to load React only once, and allow the modules to reference that single version.

As far as I could tell, this should just work, but I couldn't find any documentation that explicitly stated this. So, after a bit of googling around, I built a quick test.

To be sure this worked as expected, I created a quick test using a locally served "module" and JSFiddle to do the import. I tested with both Chrome and Firefox, and saw the expected results! 🎉

Here's the module code I used:

And the loader code (Note: React is imported by JSFiddle, so we don't need any code to do that):

And here's the results: 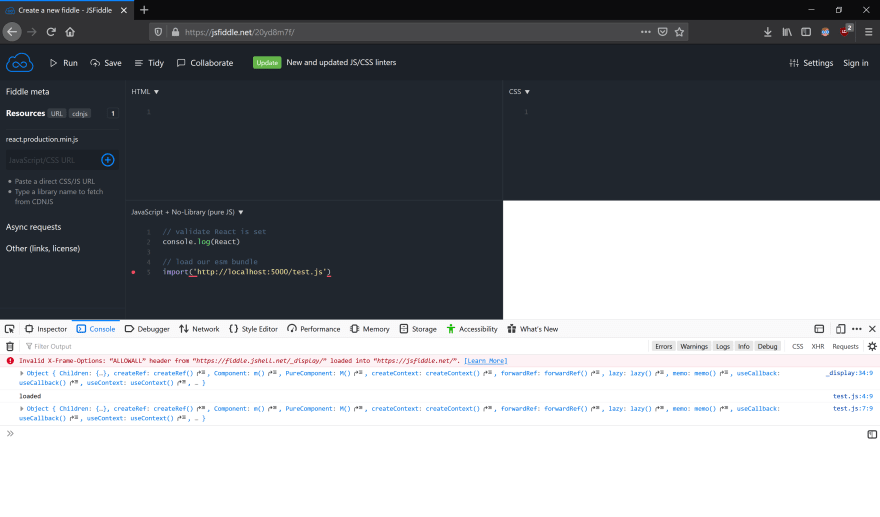 In Firefox, everything looks great! 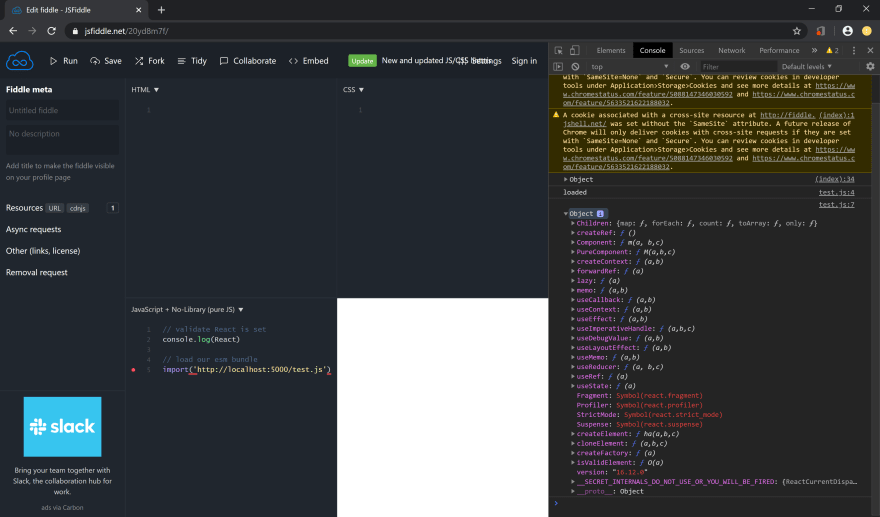 In Chrome, everything looks great!

As you can see, the test is pretty simple - just a JSFiddle that loads React, and runs our import, and a locally served module, that logs loaded when it loads, and prints the React value from inside the module. Given that the React object both at the parent level and inside the module look the same, I'm happy to conclude this works great.

Globals (that is - things defined in the environment from which import will run) "just work" inside modules (the code inside the module, that import is running for us). That's the take-away. 😁

Once suspended, bengreenier will not be able to comment or publish posts until their suspension is removed.

Once unsuspended, bengreenier will be able to comment and publish posts again.

Once unpublished, all posts by bengreenier will become hidden and only accessible to themselves.

If bengreenier is not suspended, they can still re-publish their posts from their dashboard.

Once unpublished, this post will become invisible to the public and only accessible to Ben Greenier.

Thanks for keeping DEV Community 👩‍💻👨‍💻 safe. Here is what you can do to flag bengreenier:

Unflagging bengreenier will restore default visibility to their posts.