I used to avoid Regular Expressions aka RegEx at all costs. Aside from not understanding how to use it I didn't see much purpose for it in my code. I suppose, to be fair, RegEx isn't exactly beginner friendly. Nevertheless, I now find myself looking for opportunities to use it. The truth is that RegEx can save a lot of development time and is a powerful tool.

Recently, I have been focused on re-creating parts of YouTube, and I noticed something simple, yet cool, about video descriptions and comments. Users can enter urls, timestamps and hashtags and YouTube will parse the input and transform the text into links. Urls become external links, timestamps are links that seek the current video to a specific spot and hashtags become search terms to find related content. 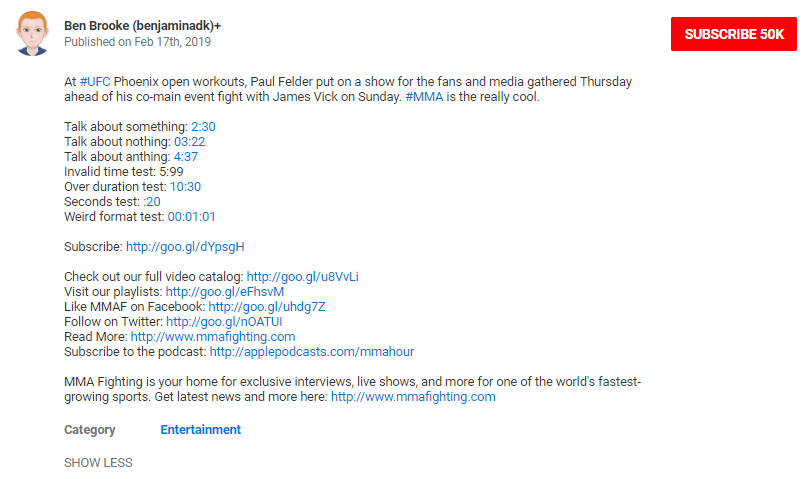 There are some good tools and sites out there to learn about this. Sometimes just googling regex for <whatever> will bring up some good Stack Overflow. RegExr is really cool. You can create an account as save your expressions into a library of your own. Plus they break down each character and what it does, not to mention a database of community expressions. Regular Expressions Info has more detailed breakdowns of pretty much anything and everything related to RegEx.

Now this tutorial assumes you have already captured and stored the user input. That is the raw text we are parsing. From here we need to address a few things as we process the text into HTML.

Preserving the format is pretty easy. One option is HTML pre tag. pre is short for pre-formatted I think. 🤦‍♂️

Another option is to use the white-space CSS property set to pre. We might as well use pre-wrap. Otherwise long lines of text will overflow their container.

Now we need to bust out the big guns 🔫. First we need to find, and somewhat understand the regular expressions involved. Here is a pretty standard expression to find http/s urls. It basically looks for http://anything, but it seems to do the trick. Note the g flag - matches all occurrences and the i flag that ignores case. It can also match ftp and file urls by using the OR operator in the first capture block.

The timestamp expression isn't quite as bad. Note that (?:)? sets up capture groups that are optional. [0-5] makes sense because when dealing with HH:MM:SS you won't see 01:90:90, the highest minute or second can be 59. Anyways, this is set up to match MM:SS and :SS which is cool. This allow the user a little more flexibility in what they can use are time links.

Ok, lets get down to the function itself. We are going to leverage the replace method on the String prototype. String.prototype.replace can take RegEx as the first argument and a function as the second. This callback function can receive many arguments, but the first is the matched text itself. This means we can use the original urls/time/hash in our replacement string. The idea is to replace our matches with the appropriate HTML. To keep things simple, we'll start with urls. This process in commonly called the linkify process. Get it? 🧠

I used an arrow function and returned a template string to save on space. Target set to _blank ensures that this page will be opened in a new window. Template strings you should probably know about by now.

Dealing with the timestamps is a little more advanced. We are going to need a helper function and some additional logic to make them useful. Assume we have a video player, like YouTube, for this example. We want to display the timestamp link in HH:MM:SS format but we need to convert that value to seconds so we can set a search parameter and have a value that we can send to our player - The HTML video element has a property called currentTime which gets/sets the time of the video in...seconds! We also need the value of the url to our player's page on our site.

As a side note I really like the string to seconds function. Its been a while since i used a while loop. 🤓

Now when a user clicks a timestamp link we can implement some tricky logic in our React component to seek the video to the time specified in the link.

This may look weird because we are used to routing libraries, but it works. Learn about URLSearchParams. Using a ref is also key here. There are a feature of React that gives us access to the underlying DOM Node and all the built in APIs that go with it. React Refs and HTML video/audio DOM... are helpful.

Hashtags work in a very similar way to timestamps. It is up to the developer to decide how to implement them into the UI. YouTube runs a search for anything related to hashtag term. The expression to match hashtags might look something like this.

This one is actually almost understandable. But we can break it down as follows.

Now we can lump everything together into one big function. Of course everyone's needs are different but the following would be something like YouTube. This time I am passing a video object. This is just one way to do it. However, in my implementation I don't see much sense in making timestamp links if the time is greater than the duration of the video. Check out the if/else block, by returning the parameter to the callback function it is as if we ignore that specific match. Worthwhile.

So if you actually made it this far you for sure learned something. I figured it took me a good part of a day to figure all this stuff out and I had to pull from all kinds of different websites and searches. Why not put it all down in the same place. Naturally, there are probably more efficient or more thorough RegEx out there. But these seem to work well for my use case.

Library that does all this for you

Power your Vue.js apps with a CMS