The Same-Origin Policy is a foundational web security feature. It ensures that an attacker with control of Site A cannot trivially gain access to data from Site B. Without the Same-Origin Policy, JavaScript running on example.com could simply fetch('https://www.facebook.com'), read your private information, and do what it wants with it.

But what happens when the same company owns both Site A and Site B and wants to share data between them? Or when the owner of Site B wants to expose an API that Site A can access through client-side JavaScript?

These days, the answer is clear: sites can (and should) use the CORS standard. With CORS, Site B can explicitly permit Site A to make certain requests.

But before CORS, there were hacks, and the most prominent one was JSONP.

JSONP takes advantage of the fact that the same-origin policy does not prevent execution of external <script> tags. Usually, a <script src="some/js/file.js"> tag represents a static script file. But you can just as well create a dynamic API endpoint, say /userdata.jsonp, and have it behave as a script by:

Now Site A can add a few lines:

...and JavaScript running on Site A has access to the user data returned from Site B (api.example.com).

(Some of) the problems with JSONP

In the example above, Site B is intentionally exposing unrestricted access to the logged-in user's details. Probably a bad idea! That's why sites that implement similar APIs via JSONP will typically check the Referer1 header to see if the referring hostname is allowed, and only return session-specific data if so.

Unfortunately, checking the Referer header is imperfect, because:

This problem has left a lot of sites vulnerable over the years. There are various names in use to describe this vulnerability, but we can call the specific attack a "JSONP-based CSRF", and the outcome of the attack is Information Disclosure, which can sometimes enable further attacks, such as Session Hijacking.

JSONP in the wild 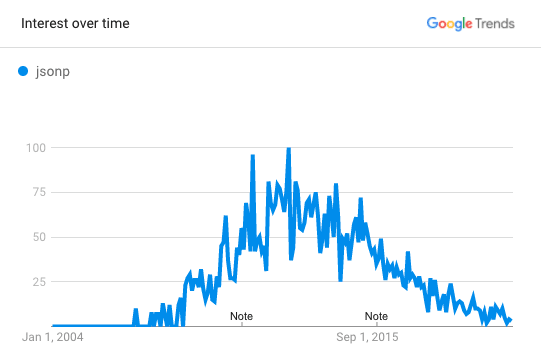 In the chart above we can see that interest in "JSONP" as measured by Google searches peaked in 2012 and has declined to nearly nothing since. So we know it doesn't appear to be a popular technology to use going forwards, but how much usage is still lingering on the web?

The HTTP Archive regularly crawls top sites on the web and stores various technical details. Crawl results can be queried via Google BigQuery.

Earlier, we saw that JSONP endpoints typically accept a ?callback= GET parameter and return a Content-Type: application/javascript header. This gives us a heuristic to use to search through an HTTP Archive crawl and identify sites that still use JSONP:

This goes to show that even though JSONP is an outdated technique, it still has fairly significant use in the wild.

The vast majority of the endpoints we found above are unlikely to contain vulnerable use of JSONP. Many are cases where JSONP is used to deliver relatively low-risk features like third-party widgets (e.g. a feed of recent Instagram posts) or analytics requests which don't modify or return user data.

But it's possible to refine the query down further. Through another version of the query, I found a suspicious JSONP endpoint on a major site. Then I verified that it was exploitable in the case where no Referer header is sent2, and that it can leak user session data (I reported the issue and am leaving out identifying information here).

In the case where I did find this vulnerability, only a single modern browser (Firefox) was vulnerable. Read on for why...

The JSONP endpoint in our example relies on session cookies to authenticate the user. Even though Site A can't read cookies from Site B, it can still request certain resources (such as the JSONP endpoint) from it. And until recently, browsers would generally send cookies along with these third-party requests. This allows the JSONP endpoint on Site B to return the same authenticated state that it would return to a user who visited Site B directly, without which the endpoint simply wouldn't function.

There were a number of issues with this default behavior, and JSONP CSRF is only one of the vulnerabilities it enabled (even leaving aside privacy issues). So a SameSite: (Lax|Strict|None) cookie attribute was introduced which controls whether specified cookies are sent in cross-site requests. And starting in 2020, browsers began setting this attribute to a safe default. This is likely to eliminate many active vulnerabilities, because site authors now must explicitly opt in to dangerous behavior by marking cookies as SameSite: None. Many of the JSONP endpoints in the wild may be forgotten by their authors and will break silently, fixing the vulnerabilities (this is likely what happened in the case of the Firefox-only issue I found via the HTTP Archive); other breakages might be noticed and serve to encourage a switch to safer techniques.

Safari is marked as missing this improvement in the table above, but it fixed the underlying issue by other means (simply blocking all third-party cookies), in mid-2020.

For developers: One big lesson is to avoid using JSONP. It's very likely that you no longer need it given that browsers as far back as IE10 had CORS support, and even large enterprises and my in-laws have long given up on IE9 (a browser released 10 years ago) at this point. (I'm not saying all sites already using JSONP should rewrite, most have low-risk use cases that involve delivering a user-agnostic response that can't result in unexpected information disclosure.)

Another lesson is to just generally be cautious about using techniques that work around web standards and the browser's default security model, but sometimes this is easier said than done. JSONP served a very useful purpose, and its ubiquity helped push the web platform to improve, encouraging browsers to build in safer options.

For security researchers: HTTP Archive data could be worth playing around with in BigQuery. There are a lot of possible searches that I left unexplored in this post, including a search for sites that have JSONP endpoints and deliberately mark some cookies as SameSite=None (meaning that any exploit found would more likely be exploitable cross-browser).

For the Firefox team: Following other browsers down the path of defaulting to SameSite=Lax(or following Safari in blocking all third-party cookies) sooner rather than later would help to patch up some active vulnerabilities on the web.