Far from being a Docker expert, I nevertheless tried recently to build my own Docker containers, as it makes it so much easier to transfer apps between operating systems (os). However, every start is challenging and hence, I felt a documentation of my first steps might come in handy for people eager to containerize away. I am working with a mac os and have build a container for a R-shiny app. This has been originally been published on my website

Docker was introduced to the public in 2013 at PyCon in Santa Clara (I recommend you watch the 5 min. talk here).

Docker software is aiming to facilitate project implementation, putting your applications into Linux-containers (containerization), which will include all the libraries that your app requires. It is similar to a virtual machine, however, has the advantage of not simulating a whole computer operating system, but only the necessary bits. Hence, docker containers outperform VMs.

Some phrase explanations: A container is an isolated software environment which runs the application. It holds a static docker-image, which contains everything that your app needs, e.g code, libraries and configuration files. The source code for your images is stored in Dockerfiles. Assuming everybody likes to bake: The image is the recipe, the container is the cake.

Each virtual machine holds a copy of a full operating system that its applications are using. Therefore, VMs will take up a lot of space and memory, consequently, being computationally expensive and slow. Docker, on the other hand is build upon the host OS, hence does not need an additional OS and can excel in performance and storage requirements.

One of the biggest advantages for me as an R-user is the stability and reusability of R-versions and corresponding packages. Whereas you often run into issues with libraries no longer supported by your current R version, docker stores the required R environment and the used libraries.

Additionally, Docker is easy to deploy and saves you the hustle of installation and setting up your webapps on different machines.

How-to-guide for your first Docker Image

Before you build your own container with an app, have a look at the container provided by docker 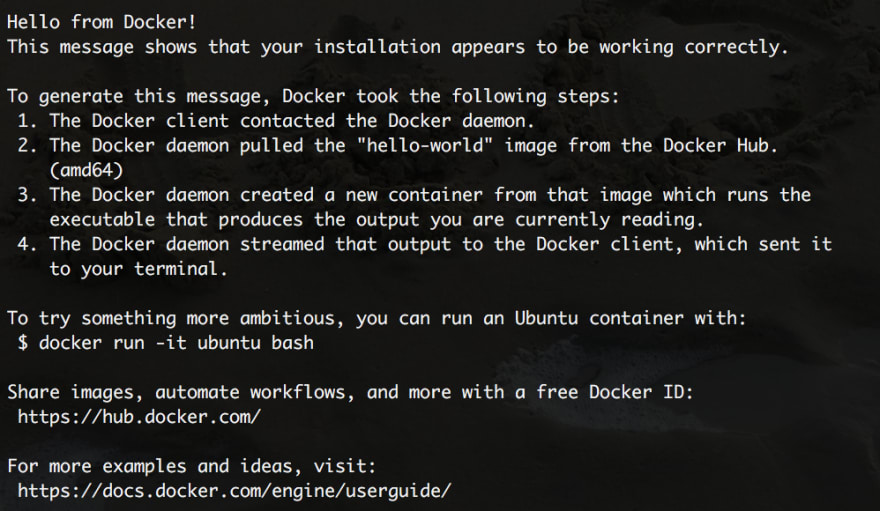 because the hello-world image above is not found locally, it will be pulled from the Docker Hub. If you see the text above it worked.

-To view your docker images:

Create a local docker container for your app

-Create a directory and go there:

-Create your app and a run file:

app.R (I have created that app in another blog)
app_run.R (see content below):

-Create a Dockerfile (I am using vi commandline-editor. Feel free to use anything you like)

Finally, read the recipe and bake the cake, or just build the image and run the container:

Calling https:/localhost:8080 in your webbrowser you can now use your containerized shiny app. Additionally you'll be able to ship your container to a server, another mashine etc. The R enivironment in your container will remain the same and your app will be running smoothely, even if you happen to update your R version.

If you want to view which containers are running and have run:

Be aware that everytime you use docker run image-name you are creating a new container. Instead you could run docker run -rm image-name, which will ensure the container is removed afterwards.

Below is a list of docker commands I found usefull. Vote for your favorite command in the comments section.

https://docs.docker.com/get-started/#docker-concepts (detailed instructions on where to start)

https://docs.docker.com/docker-for-mac/ (docker for mac - get started)

https://ropenscilabs.github.io/r-docker-tutorial/ (some instructions on how to run Rstudio in a container and generally on R and docker)

An Introduction to Rocker: Docker Containers for R

Docker: have a Ubuntu development machine within seconds, from Windows or Mac
(some instructons on how to building and using a containerised a unix-machine)