Schedulers are a beautiful piece of code. In computer systems, they are as old as operating systems. In real world they are as old as our alarm clocks. In the world of computers, programmers used to schedule an appointment with an operator(a person) to run their code. Later when programmers wanted to take the operators out of their job they wrote scheduling algorithms.

When Operating Systems came into the picture, instead of computer operators it was schedulers that fed programs into the CPU for their execution. Over the years, the number of processing cores increased and so did the complexity of scheduling algorithms. The layers of hardware caches, RAM and hard disks brought up the need for different kinds of scheduling long, medium and short term.

Now, in the era of cloud and distributed systems, schedulers became an indisposable architectural component of any software system. These asynchronous task executors are behind the emails, notifications, the pop-ups that greet us on logging in, and reports that are sent to your email and so on.

The rest of this blog sheds light on conventional task queue systems, and where asyncio stands, and finally we cover the pros on cons of the major players. 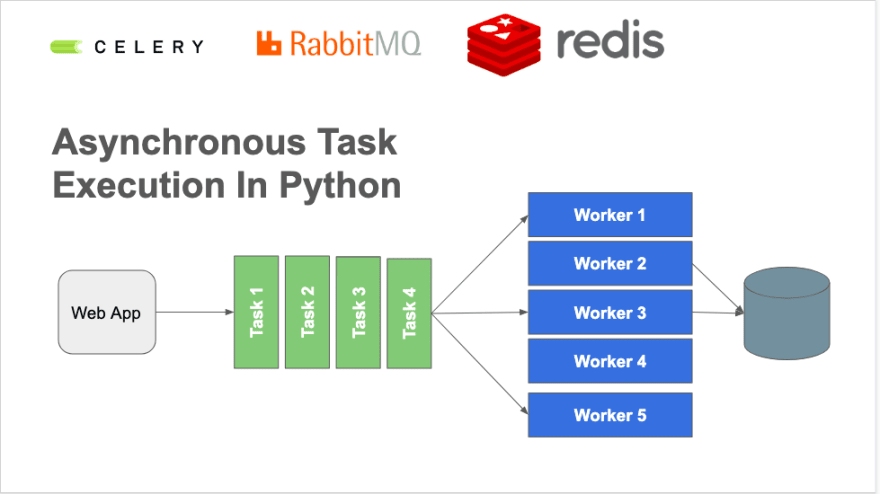 Conventional tasks queues have two programs (a producer and a consumer) with a database acting as a queue. For every task created by the producer an entry is made in the database with a flag NotStarted, Running, Completed, Failed, and so on. At any point task workers (say a never-ending python program) will query this DB and look for incomplete tasks and start running it. It is a simple implementation but it has its own disadvantages.

- Maintaining tasks on a DB table means that the table grows based on the number of tasks. It becomes complicated when the DB grows so much that we have to deal the problem of scaling.

For every consumer that's free it queries the DB with task flag Scheduled, to fetch a scheduled task that it can run. The querying becomes costly as the size of the DB grows.

Cron is the simplest software utility that enables you to run a task asynchronously at a given time. The utility maintains a single file (a table) called crontab. The utility itself is a scheduled job that runs every minute, takes a log of every command that is scheduled to run in the current minute, and runs each command. How cool is that?

I wrote a simple python script to trigger a Mac notification that asks me to take a break every 20 minutes.

1. What if you have users across timezones? Whenever we deal with time, we are also dealing with timezone problems. Cron jobs by default runs in the configuration of timezone in the machine it is running, we can override it using TZ environment variable. But cron isn't suitable if we want to run different tasks at different timezones. 2. What happens if a cron fails? When a script fails on executing a cron job, the error is just logged and the cron waits for the next schedule. This is not the most reliable way of handling errors. We would often want schedulers to retry until a certain threshold before moving on.

3. Scaling - What if the number of tasks to be executed at a given time is very large? - What if a single task occupies a lot of memory?

I will be using a treasure hunter program as an example to explain the concepts in the blog. The problem statement is simple.

Asynchronous Python is gaining popularity after the release of asyncio. Though it has got nothing to do with task schedulers, it is important to understand where it stands.

Python threading is an age-old story. Though it gives an idea of running multiple threads simultaneously, in reality it doesn't. Why? Because cpython has GIL(Global interpreter locks). Unless your program has a lot of waiting over external (I/O) events, using threading is not of much use. Even when your laptop has multiple cores, you would often find them idle on CPU intensive tasks due to GIL.

The treasure_hunter program implemented using threading would have threads looking through different ranges of files.

We have a common flag treasure_found for all threads to set.

The multiprocessing module enables us to overcome the disadvantage of threading. The simplest way to understand this is that the GIL applies only to threads and not to processes, thereby providing us a way to achieve parallelism.

Multiprocessing also works well on CPU intensive tasks as we can use all the cores available independently. When designing a multiprocessing problem, the processes often share a queue from where each process can load tasks for its next execution.

In the above two examples, the switching between the threads or processes is handled by the CPU. In certain cases, the developer might be more aware of when a context switch should happen over CPU. Instead of spinning up processes or threads, it lets the program(developer) decide when a program can halt and leave a way for the execution of other tasks.

Celery is an asynchronous task queue/job queue based on distributed message passing. It is focused on real-time operation, but supports scheduling as well.

Celery works around two primary components a Queue and a Worker. Queue, also called as message_brokers is a queuing system where you push your tasks to be executed asynchronously. Worker pings the queue once in a while and executes the tasks.

You might often confused between the terms Redis, Celery and RabbitMQ. The Queue component mentioned earlier is not inbuilt in celery. It uses RabbitMq or Redis queuing system. This is why you often find articles that mention all of them. 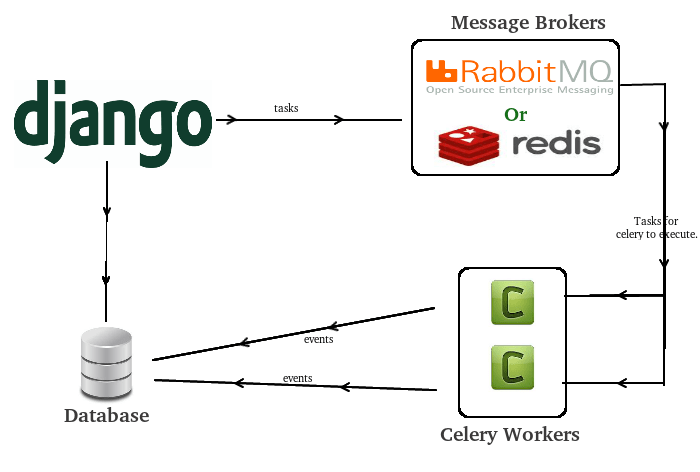 Unlike crontab, celery by default does not schedule tasks to be run at certain times. To support job scheduling, celery uses Celery Beat.

What happens when a task fails? When a particular task fails, you can configure celery to retry until a particular exception occurs, or set max_retries parameter to enable retrying n times before giving up.

Let's say you are backing up N-items into a DB as your task. In case two workers pick up the tasks and execute it then it is for the calling function to make sure that the same entry is not made in a DB twice. Workers will have no clue about the side effects of running a particular task.

Redis by default is an in-memory database and that's about it. RQ (Redis queue) is a task scheduler to asynchronously execute tasks, which uses redis' Queue data structure and has an inbuilt worker implementation. The architecture and working is very similar to that of Celery.

RabbitMQ is just a queuing system. It is built over AMQP protocol. In comparison with Celery (which only has worker) and RQ (has both worker and Queue), RabbitMQ has just the queueing system, a robust one. 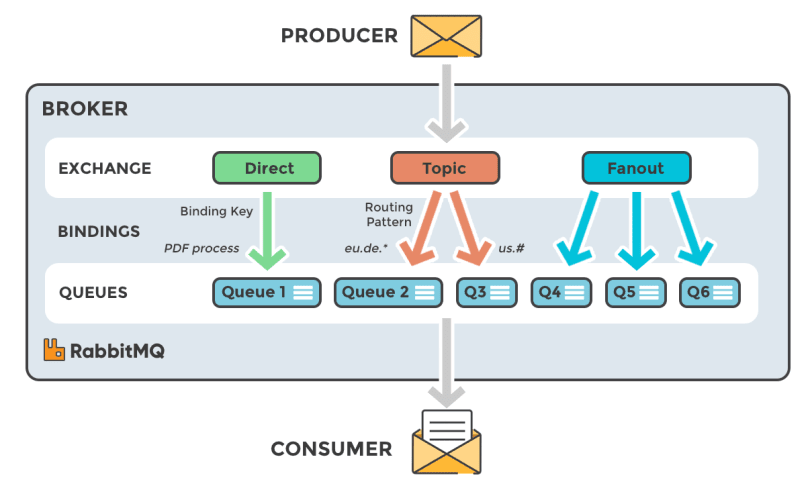 RabbitMQ works on publisher subscriber model. It has 4 major components.

Producers - The code that pushes tasks to the queue. Exchangers - Decides which queue a message should be pushed into. - Direct (Send a message to the queue with respective table) - Topic (Send a message to the queue that matches a specific routing pattern) - Fan out (Send a message to all queues) Queues - Queues are what we have been discussing so far. It has a list of tasks for the workers/consumers. Consumers - Consumers (Worker), also called as workers, are responsible for the actual execution of tasks. At any point of time, workers can be configured to work on a specific queue. RabbitMQ does not have it's own worker, hence it depends on task workers like Celery.

Fun Fact RabbitMQ, inspite of supporting multiple queues, when used with celery, creates a queue, binding key, and exchange with a label celery, hiding all advanced configurations of RabbitMQ.

While Pub/Sub is close to asynchrous execution, Google PubSub primarily focuses on message queues and streams. Imagine sending a group message or posting something in a facebook group then every subscriber who is listening to that specific queue should get an alert. These are classic usecases of a Google Pub/Sub.

Where does it differ?

At this point it is valid to ask, why can't we implement the Pub/Sub model with Task queue, both are asynchronous and both execute tasks right? Google provides us with a clear distinction

Both Cloud Tasks and Cloud Pub/Sub can be used to implement message passing and asynchronous integration. Although they are conceptually similar, each is designed for a different set of use case. This page helps you choose the right product for your use case.

The core difference between Cloud Pub/Sub and Cloud Tasks is in the notion of implicit vs. explicit invocation.

Cloud Pub/Sub gives publishers no control over the delivery of the messages save for the guarantee of delivery. In this way, Cloud Pub/Sub supports implicit invocation: a publisher implicitly causes the subscribers to execute by publishing an event. By contrast, Cloud Tasks is aimed at explicit invocation where the publisher retains full control of execution. In particular, a publisher specifies an endpoint where each message is delivered. In a nutshell, Cloud Tasks are appropriate for use cases where a task producer needs to defer or control the execution timing of a specific webhook or remote procedure call. Cloud Pub/Sub is optimal for more general event data ingestion and distribution patterns where some degree of control over execution can be sacrificed.

I referred to a whole bunch of links and read through all the documentation before writing this blog. Here are a bunch of blogs that I really enjoyed.