The best way to overcome your escalating fear that your codebase / world is collapsing around you is deep breathing. Before frantically flying to the keyboard, just go in through the nose... and out through the mouth. 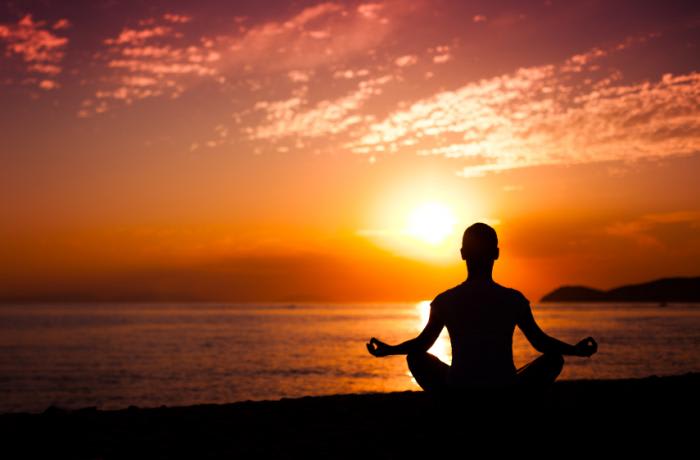 Before doing anything you might regret, it's best to look through all recent commits to pinpoint where you're reverting to. The cleanest way to do so is using: 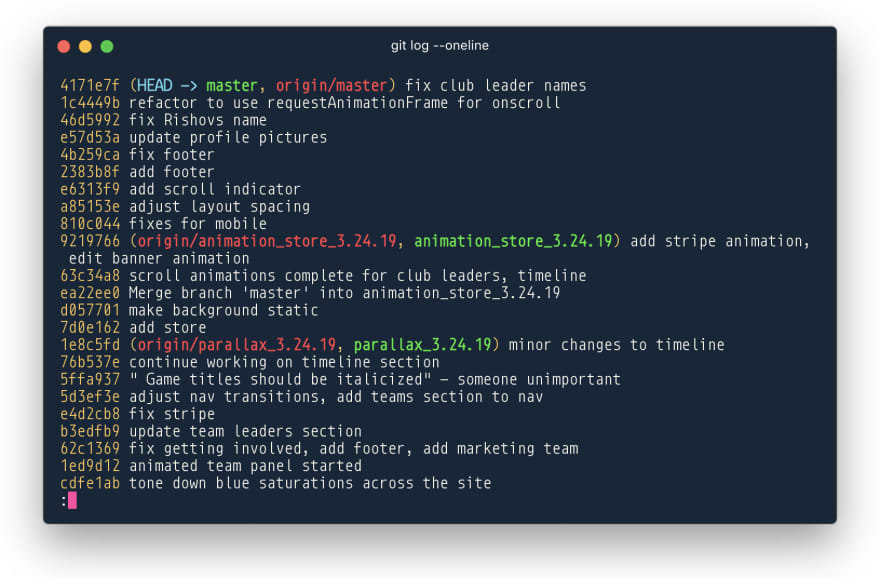 This will show all of the commit history for your branch, starting with the most recent. It also shows branch points to see the history of everything that got merged.

Also notice the alphanumeric strings to the left of each commit. These are hashes which uniquely identify a given commit. Once you find the inflection point for your code explosion, copy the hash for that commit and move on to the next step.

Note: You can exit this log by hitting the "q" key. This is very vim so I don't blame you if you got stuck here 😛

Step 3: Diff against the most recent commit

Checking for differences against your revert point is a great way to verify what changes you're about to make. To do so, use the copied hash and run the following command: 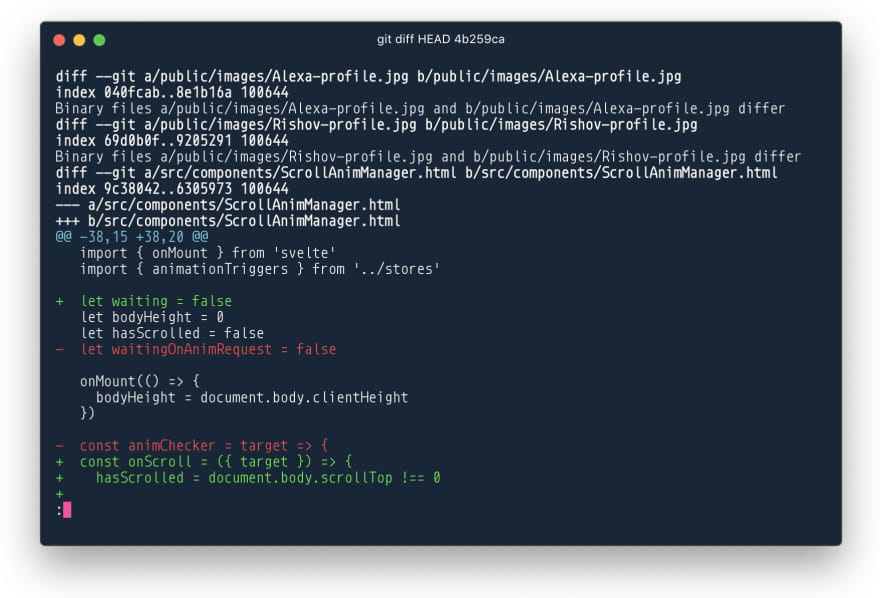 Let's break this output down. First, we see a log of all binary files changed, with paths listed as a/file_path and b/file_path. These files are often editor / build specific files (as in .vscode or .circleci directories) and image files. In this case, the the resolution of a few images were updated.

Next, we see a line-by-line breakdown of lines added and removed from each modified file. Note this is from the perspective of changing from our most recent commit to the commit we're reverting to. So, everything in green is what will be added after reverting, and everything in red will be removed.

Also note the ^ at the end there. This makes sure we diff down to the ancestor of that commit hash. Otherwise, the diff will stop one commit early.

If you scroll through this and everything looks good, it's time to obliterate those commits!

The first option is the most obvious one: run the revert command onto the commit hash we're reverting to. This is very straightforward:

Note that doing so will create a new commit meant to revert all changes made down to the commit specified. This works well since you should be able to push your changes and have a clean change log as intended.

Worth warning that this will open a confirmation file in vi (assuming you're using the default git editor) for each commit being reverted. If everything looks as expected, type ":wq" to confirm the reverts.

You can also add the --no-commit flag to stage each revert without actually creating a revert commit. This is useful when reverting several commits deep since it allows you to submit one large revert commit at the end. Otherwise, you would end up submitting a revert commit for each one individually.

Still, you might want to change your commit history entirely so it appears those nasty commits were never there. For that, there is a second option...

Note: Read the disclaimer at the end of this section before going with this option.

Rather than making a revert commit, you can modify the commit history directly using a rebase. To start the process, type the following: 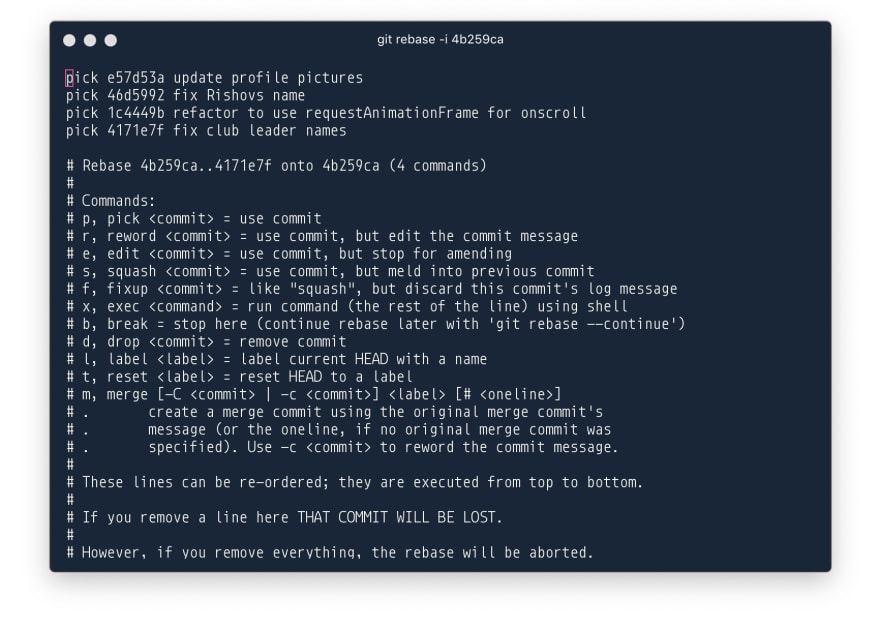 Notice the -i flag here. This is a shorthand for --interactive, which allows you to edit each commit individually from the head to our specified commit hash.

It's simple from here to drop all of our commits. The instructions are actually visible right there in the comments, but as a TLDR: Replace every "pick" with a "drop" for all commits listed.

...If you're stuck wondering why your delete key isn't working, that's because git uses vi as the default editor. You can go here to change over to your favorite editor for this process, but if you're fine sticking with vi, it shouldn't be too difficult.

If you want to abort at any time, delete all the lines listed above the commented section (those starting with "#") to force the rebase to error out. If you're using vi, just mash "d" repeatedly until the lines are gone 🙃

If your terminal window closes or something else happens, the rebase will hang uncompleted. To abort the rebase and start over, enter the command git rebase --abort.

If all goes well, you will have officially changed history!

Modifying git history can be a problem if you have already pushed now reverted commits to the remote branch. After reverting, it will appear your branch is behind the remote, so you cannot push directly anymore. In this case, you will have to run git push --force-with-lease. This flag will force your history onto the remote by removing those dropped commits. with-lease acts as an error check to ensure the rest of your commits are in line with the remote's.

You may have heard using --force on a push isn't best practice since it involves rewriting commit history on the remote. This can be a problem for others working off of the same branch, since their history will no longer line up with the remote's. There are ways to fix this, but make sure others are aware of your force push before they run into trouble!

Hopefully by the end of this you've gotten your branch back on track! Mainly, always make super sure of what commands you're about to run when modifying commits, especially when editing git history directly. This can be a very daunting task for beginners and experts alike, so making sure of the diff and viewing the commit log are a must!

I actually wrote this article after having to go through the same process for my job, wanting to give my hastily written notes some clarity. Hope this helps others stuck in the same boat 😊

Learn a little something?

Excellent. In case you missed it, I launched an my "web wizardry" newsletter to explore more knowledge nuggets like this!

This thing tackles the "first principles" of web development. In other words, what are all the janky browser APIs, bent CSS rules, and semi-accessible HTML that make all our web projects tick? If you're looking to go beyond the framework, this one's for you dear web sorcerer 🔮

Subscribe away right here. I promise to always teach and never spam ❤️

Once suspended, bholmesdev will not be able to comment or publish posts until their suspension is removed.

Once unsuspended, bholmesdev will be able to comment and publish posts again.

Once unpublished, all posts by bholmesdev will become hidden and only accessible to themselves.

If bholmesdev is not suspended, they can still re-publish their posts from their dashboard.