If your team has been following best practices guidelines put out by the Angular team (& adopted by the community as a whole), you may have made the decision to implement Strict Mode for TypeScript in your codebase.

You may have encountered a new error in Angular Property 'myClassMember' has no initializer and is not definitely assigned in the constructor.ts

If you weren't using a lot of (or any) of the flags for configuring stricter TypeScript parsing previously, you may see new "errors" like this as you code.

*Note, these are not "new errors caused by TypeScript" but instead "already existing potential errors in your codebase that the stricter TypeScript flags are now catching" - this is an IMPORTANT mental shift for your team to make. TypeScript is here to help us write better code and catch potential errors, not to make our lives as developers harder.

The "has no initializer and is not definitely assigned" error is due to the strictPropertyInitialization flag being set to true as a part of Strict mode, and is checking to ensure any class property declared is not null. In Angular, we are typically declaring properties on our classes when we encounter this error. The TypeScript compiler is reviewing our class members, and if it does not see our class member being given a value when it's declared or if our member is not given a value in the constructor function, it thinks that member is null, and rightfully so!

This is a common occurrence in Angular where we often initialize our members in the component's lifecycle hooks - which TypeScript is unaware of. TypeScript doesn't know that our ngOnInit function will run after the component is initialized.

Will throw the error:

To let TypeScript know we're going to initialize myLifecycleDefinedMember in our component, we can use the Non-null Assertion Operator, or a !.

The above example is an appropriate use-case, this does NOT mean: 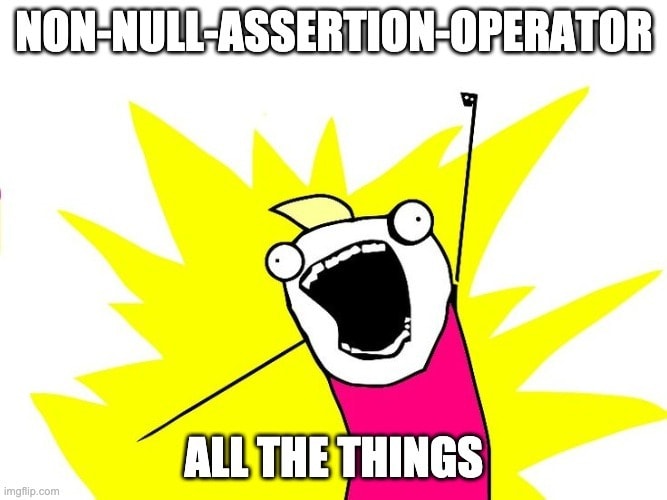 You should ONLY use the Non-null Assertion Operator when you know you will be setting a value for a component member. If there are instances where you aren't sure if a member has a value, it is better practice to use the optional operator.

Bitovi
We can help you create amazing applications.
How to Improve Your Angular E-Commerce Application with Scully
#angular #scully #seo #webvitals
RFC: Strictly Typed Reactive Forms Gotchas Every Angular Developer Needs to Know
#angular #forms #rfc #update
How to Create Custom ESLint Rules (It's Not as Hard as You Think...)
#eslint #javascript #typescript

Once suspended, bitovi will not be able to comment or publish posts until their suspension is removed.

Once unsuspended, bitovi will be able to comment and publish posts again.

Once unpublished, all posts by bitovi will become hidden and only accessible to themselves.

If bitovi is not suspended, they can still re-publish their posts from their dashboard.