The introduction of Null Safety in Dart 2.9 marks a major milestone for the language. Null Safety helps you avoid an entire class of problems, and enables some performance improvements.

This article outlines what's changed, and shows how to use the new Null Safety features by example.

As of June 2020, Null Safety is available in Tech Preview on the Dart dev channel. It's not yet available in the Flutter SDK, but you can try it at nullsafety.dartpad.dev: 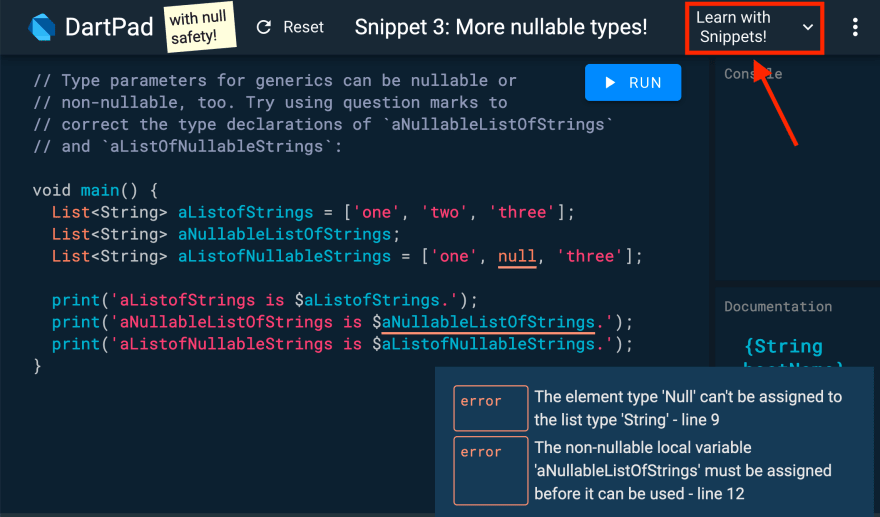 This contains a "Learn from Snippets!" dropdown with mini-exercises to get familiar with the new syntax.

However, null errors are so common that null references have been called the The Billion Dollar Mistake. 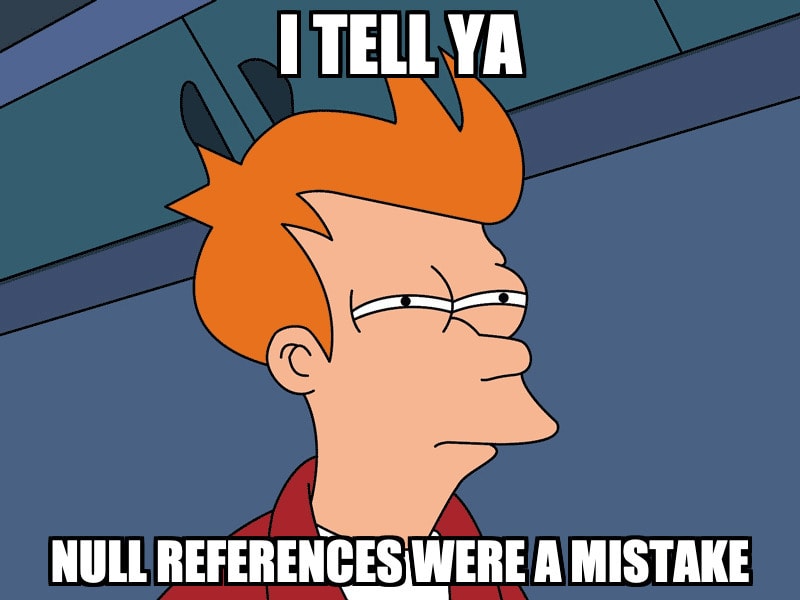 So let's see what's changed in Dart to address this.

Dart is said to have a sound type system. When we write Dart code, the type checker makes sure that we can't write something like this:

This code produces an error telling us that "a String value can't be assigned to a variable of type int".

Similarly, when we write a function in Dart, we can specify a return type:

Because of type safety, Dart can guarantee with 100% confidence that this function always returns an int.

But type safety alone can't guarantee that a variable (or return value) is not null.

As a result this code compiles, but generates an exception at runtime:

In this example it's easy enough to spot the problem. But in large codebases it's hard to keep track of what can and cannot be null.

Runtime null checks can mitigate the problem, but they add more noise:

What we really want here is to tell Dart that the value argument should never be null.

A better solution is needed - and now we have it. 😎

So let's see how Null Safety works in practice.

The main language change is that all types are now non-nullable by default.

This means that this code doesn't compile:

When using non-nullable variables, we must follow one important rule:

Non-nullable variables must always be initialized with non-null values.

If you reason along these lines, it will be easier to understand all the new syntax changes.

Here both the value argument and the return value are now guaranteed to be not null.

As a result runtime null checks are no longer necessary, and this code now produces a compile-time error:

But if all types are now non-nullable by default, how can we declare nullable variables?

The ? symbol is what we need:

Note: You don't need to initialize a nullable variable before using it. It is initialized to null by default.

Here are some other ways of declaring nullable variables:

Take away: you can declare nullable variables anywhere in your code with the ? syntax.

Nullable variables are a good way of expressing the absence of a value, and this is useful in many APIs.

When you design an API, ask yourself if a variable should be nullable or not, and declare it accordingly.

But there are cases where we know that something can't be null, but we can't prove it to the compiler. In these cases, the assertion operator can help.

We can use the assertion operator ! to assign a nullable expression to a non-nullable variable:

By doing this, we're telling Dart that maybeValue is not null, and it's safe to assign it to a non-nullable variable.

Note that applying the assertion operator to a null value will throw a runtime exception:

When your assumptions are wrong, the ! operator leads to runtime exceptions.

Sometimes we need to work with APIs that return nullable values. Let's revisit the lastName function:

Here the type system can't help. If we know that the function will return a non-null value for a given argument, we should assign it to a non-nullable variable as soon as possible.

This is done with the ! operator:

Dart can make your life easier by taking into account null checks on nullable variables:

Here we use an if statement to return early if the value argument is null.

Beyond that point, value cannot be null and is treated (or promoted) to a non-nullable value. Hence we can safely use value.abs() rather than value?.abs() (with the null-aware operator).

Similarly, we could throw an exception if the value is null:

Once again, value is promoted to a non-nullable value, and the null-aware operator ?. is not needed.

Dart knows where variables are assigned and where they're read.

This example shows how to initialize a non-nullable variable after checking for a condition:

As long as a non-nullable variable is given a value before it's used, Dart is happy.

Instance variables in classes must be initialized if they are non-nullable:

If a non-nullable instance variable can't be initialized with a default value, set it with a constructor:

With Null Safety, non-nullable named arguments must always be required or have a default value.

This applies to regular methods as well as class constructors:

We can fix the code above with the new required modifier, which replaces the old @required annotation:

And when we use the above APIs, Dart can tell us if we're doing something wrong:

On the flip side, if we use nullable instance variables we can omit the required modifier (or the default value):

Positional parameters are subject to the same rules:

Between nullable and non-nullable variables, named and positional arguments, required and default values, there's a lot to take in. If you're confused, remember the golden rule:

Non-nullable variables must always be initialized with non-null values.

To fully understand all the Null Safety features, practice using them with Dartpad. Dart will tell if you're doing something wrong - so read the error messages carefully. 🔍

The cascade operations above will only be executed if path is not null.

The null-aware cascade operator can short-circuit, so only one ?.. operator is needed at the beginning of the sequence.

Up until now, checking if a collection was null before using the subscript operator was verbose:

Dart 2.9 introduces the null aware operator ?[], which makes this a lot easier:

Use the late keyword to initialize a variable when it is first read, rather than when it's created.

A good example is when initializing variables in initState():

Even better, initState() can be removed altogether:

It's common to use late in combination with final, to defer the creation of read-only variables to when they are first read.

This is ideal when creating variables whose initializer does some heavy work:

When used within a function body, late and final can be used like this:

Though I don't recomment using late variables this way. Because this style can result in non-obvious runtime errors. Example:

By declaring a non-nullable late variable, we promise that it will be non-null at runtime, and Dart helps us with some compile-time guarantees.

But I recommend to only use late sparingly, and to always initialize late variables when they are declared.

All global variables must now be initialized when they are declared unless they are late:

But as I said before, I do not recommend using late this way as it can lead to runtime errors.

Null Safety is a major change for the Dart language, and it has been introduced to help you write better and safer code.

But at the end of the day, Null Safety is just a tool, and it is your job to use it correctly.

Every time you declare a variable in Dart, think about whether it should be nullable or not. This may seem like extra work, but it will lead to better code and Dart can help you along the way.

As of June 2020, Null Safety is in Tech Preview, and is not intended to be used in production code. Full Null Safety as a stable feature is planned before the end of the year (for the latest updates see dart.dev/null-safety).

If you can't wait, you can port existing projects to Null Safety and automate the process with this migration tool.

This article was mainly inspired by these sources:

Building a Generic and Performant Networking Layer in Flutter

How to Render an SVG Image in Flutter

Once suspended, biz84 will not be able to comment or publish posts until their suspension is removed.

Once unsuspended, biz84 will be able to comment and publish posts again.

Once unpublished, all posts by biz84 will become hidden and only accessible to themselves.

If biz84 is not suspended, they can still re-publish their posts from their dashboard.

Once unpublished, this post will become invisible to the public and only accessible to Andrea Bizzotto.

Thanks for keeping DEV Community 👩‍💻👨‍💻 safe. Here is what you can do to flag biz84:

Unflagging biz84 will restore default visibility to their posts.