This article is the 2th day article of Makuake Advent Calendar 2020.

This content of the article is a translation and correction of Golangでクリーンアーキテクチャに入門する.

I usually develop CMS in private, and operate it as my blog.

It's a monolithic application called Rubel, built on Laravel and React.

Rubel has chosen a not-so-rare architecture such as MVC or Flux.

However, over the years I've been using it, I have come to feel the difficulty of maintenance because of the degree of dependence on fast-changing frameworks and many libraries.

It's not that the framework and language adopted are bad, but I felt a problem with the design itself.

Then, I found out about Clean Architecture when I was looking for a good idea.

Currently, I am developing an application named Gobel that uses Clean Architecture as a replacement for Rubel.

I would like to write about the outline of Clean Architecture and the impressions I actually used.

What is the Clean Architecture?

Before the idea of Clean Architecture came out, there were some architectural ideas.

These ideas have in common the purpose of "separation of interests".

Breaking dependence on everything and pursuing testability seem to be the central idea of architecture.

This is a schematic of the Clean Architecture.

It has been simplified by referring to the figure in blog.cleancoder.com. 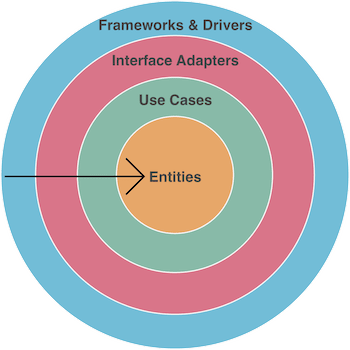 Clean Architecture consists of software divided into one or more layers.

As each layer has its own responsibilities, we aim to achieve the purpose of separation of interests.

Use the interface to resolve the dependency direction from the outer layer to the inner layer.

Specifically, we use a rule called DIP.

Since it is the most core business logic, it is the part that is least likely to be influenced by the outside world.

In other words, it has the logic of system behavior.

Interface adapters are layers for transforming data structures used in entities and use cases into easy-to-use formats for Frameworks and Drivers.

Concepts such as Controllers, Gateways and Presenters are included in this layer.

The framework and driver are the outermost layers and are the most sensitive to the outside world.

Provide wrappers and interfaces to avoid adverse effects so that external influences do not affect the inner layers.

I prepared a sample code of Clean Architecture in Go.

The directory structure is as follows.

The directory structure and each layer are defined as follows:

DIP (Dependency Reversal Principle) is a concept that needs to be understood around the practice of Clean Architecture.

DIP is one of the SOLID principles, a rule about the constraint between modules that abstraction should not depend on details.

Clean Architecture uses this rule to keep the dependency direction from outside to inside.

By utilizing the interface, DIP is protected and restrictions between layers are also protected.

If you implement it according to the rules of each layer honestly, the dependency direction will be from the inside to the outside.

In such a case, define an interface and make a dependency on abstraction to reverse the direction of dependency.

To practice DIP in Golang, it's best to understand Golang's idea of "Accepts interfaces, return structs".

think it's a basic implementation pattern that you often see in Golang.

By making it interface-dependent in this way, you can write code that is resistant to changes and easy to write tests.

Here is an example of DIP implementation in Golang.

First, the code that is not DIP.

Next is the code according to DIP.

By defining an interface and returning a struct according to the idea of "Accept interfaces, return structs", the dependency will be directed to the interface.

In Clean Architecture, DIP is applied and dependency reversal is performed when the inner layer wants to utilize the rules of the outer layer.

How to read the code

When reading the Clean Architecture code, you need to be aware of the dependencies between layers.

In my opinion, I think it's easier to understand if you read the code from the outside to the inside.

In the example of go-clean-architecute-web-application-boilerplate, it looks like the following.

The number of files is inevitably large because the code is split into multiple layers.

It may not be a good or bad judgment axis in itself, but I think that the bias in the number of files for each layer may trigger a review of layer division.

If you're a "Pragmatic Programmer", I think it's a good idea to have a code generator.

I felt that it was better to clearly define the responsibilities and coding standards for each layer.

Clean Architecture is just a design policy, not a framework, so I felt that an approach like creating a framework was required.

You may be at a loss if the definition of responsibility is not clarified.

ex. At what layer should validation and transaction logic be defined?

The necessity of an architect

In team development, I think there are often discussions about design policies.

It's not limited to Clean Architecture, but I strongly felt that it was important for the architect to take responsibility for the final decision-making of the design policy.

I think it depends on the occasion which one has the advantage.

I don't think Clean Architecture cares whether monoliths are good or microservices are good.

I think one of the relationships between the two is the ease of migration, but it depends on the architect's skill whether Clean Architecture has an advantage in that regard.

Does my portfolio looks good ?

Golang- What and Why