Popular JS projects like Angular, React, Meteor, Babel, NestJS and many others are using a single repository for all of their packages. In fact, some of them use Lerna for it.

Lerna is a popular and widely used package written in JavaScript for setting and managing multi-package and multi-project single repository for Node.js projects with NPM and GIT.

Fixed mode keeps all versions of packages at the same level. This approach is quite popular these days. You may have seen it in Angular.

Independent mode allows us to have different versions per package.

Maintaining all custom packages in a single repository sounds tempting and, as a matter of fact, it is quite easy with Lerna.

We will install Lerna as a global dependency:

As Lerna is intended to work with JavaScript and not TypeScript , we will have to adjust the initial configuration for this project.

Lerna works with NPM which stands for Node Package Manager. You will need to create an account there: www.npmjs.com and organization too, as we will create example with scoped packages: @organization/my-project

Our packages are going to be public, and for the sake of this project, we will create a Github repository.

Let’s get our hands dirty

Let’s build a simple project which consists of multiple packages for our imaginary project called hospital-sdk.

Create folder hospital and initialize Lerna inside the folder with:

This command will create lerna.json with a default folder structure in it.

/packages is a placeholder for our shared packages

lerna.json is a Lerna configuration file

Lerna doesn’t create .gitignore we will create one with this content:

We will use TypeScript in our project so we can treat it as a shared dependency. Which means we should add it on top level package.json with:

This is a recommended approach, as we want to use the same tooling across our packages. Alongside TypeScript we will install type declarations for Node.js.

As we mentioned before, Lerna is intended to be used with Node.js and not with TypeScript. We will need to add additional configuration to make that work with TypeScript.

As this is a demo project, we will assume that we will have a few modules: patient, doctor, and scheduler.

To create packages we are going to use the lerna create terminal command from the root of our project. 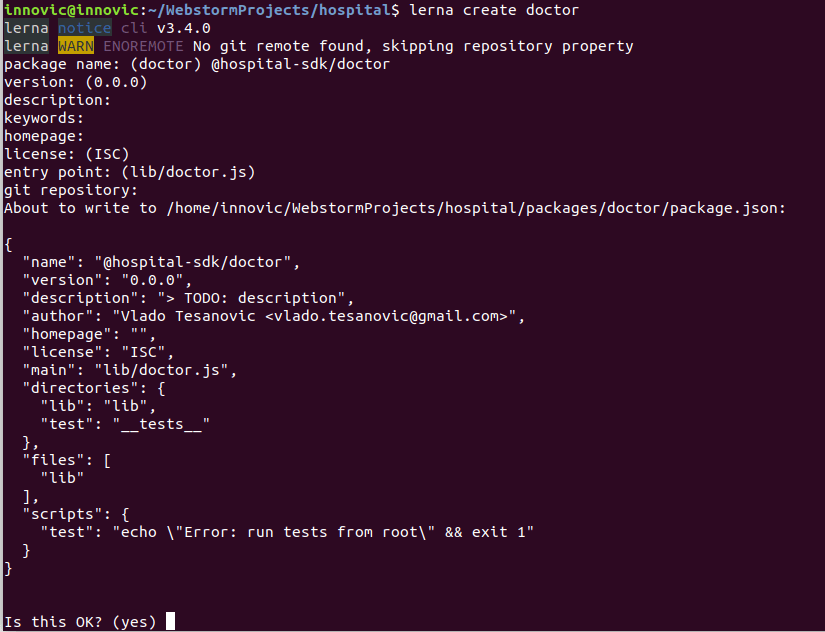 We will repeat the same process for packages patient and scheduler.

The result should be: 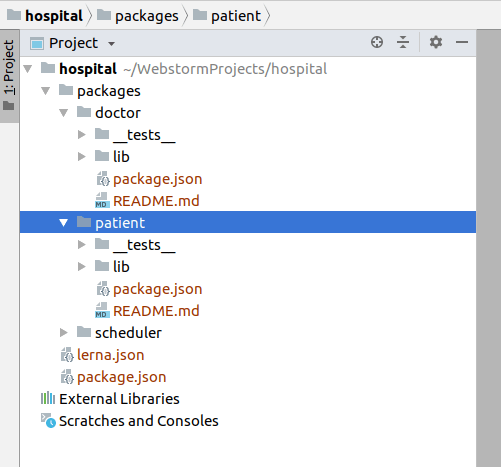 As we are using TypeScript for all packages, we will have one common tsconfig.json defined in the root of our project. Our tsconfig.json will look like:

After we added tsconfig.json in each package, we will create an src folder inside each package with a TypeScript file for that package.

We also need to register tsc script in each individual package.json.

The result should be:

We added simple logic in each .ts file.

We can test our setup by running:

The command above will run the tsc script in all created packages:

If all goes well, we will compile TypeScript files from the src folder into lib folder in each package.

If we take a look at package.json for any package in our project, we will see attributes like directories , files, typings, publishConfig and main:

These are very important to us as they control what will be pushed to NPM and what will be the entry point for our library ( main and typings attributes ).

We will create a Github repository for this project and push all of the code there.

Our goal is to publish all packages under the same NPM scope ( organization ). NPM organization can be private as well; in that case you can control who is going to see/use your packages.

We created a public ( free ) organization at npmjs.org:

We have to log in to that organization from terminal:

At this moment, we have organization and build script ready. Let’s glue it all together under one npm script from the root package.json:

From terminal we will run:

Lerna will guide us through the publishing process where we will need to choose a package version and push tags to Github.

If all goes well, we will see message at the end: lerna success published 3 packages.

We will create folder integration in our project directory and install all packages in it:

In integration/src/index.ts we can import all our packages and console.log it:

Finally, we can add start script in integration/package.json :

and run it from terminal:

Bingo! We successfully called exported classes from our packages.

There are a couple of Lerna commands worth mentioning:

lerna bootstrap Install all dependency from all packages within a project

Source code is published on:

The post Setting up a monorepo with Lerna for a TypeScript project appeared first on LogRocket Blog.