There has been a lot of talk on let vs const debate already. In this article, I want to look at two keywords that have been an integral part of this debate. Knowing these, I hope you can also choose your own side in the debate.

Reassignment consists of assigning a new value for a variable using the = operator. This restriction on the part of const also leads to another: It must have a value at the time of declaration. Because reassignment is forbidden, you can see that a variable declared to be undefined would forever be undefined in it's scope. So, it does not make sense to declare it in the first place.

Before we talk about mutations, we have to take a slight detour towards types in JavaScript.

Values can be of type:

You don't need to know all of these to continue this article, I'm just listing them here for completeness.

Objects are everything else: Objects, Arrays, Functions...

One example of this implementation would be that arrays are just normal objects with just integers as keys and extra functions on it. Each of these have restrictions and extra functionalities all build on the native JavaScript object.

Here a is a variable pointing into the memory containing 1 as value. When a is reassigned to another value, 2, then the variable points to a different place. This holds true with every primitive there is, and for reassignment also for objects.

person1 the first object in memory and then the second object.

However, if you had choosen to assign the variable to another, the memory representation would have been different. 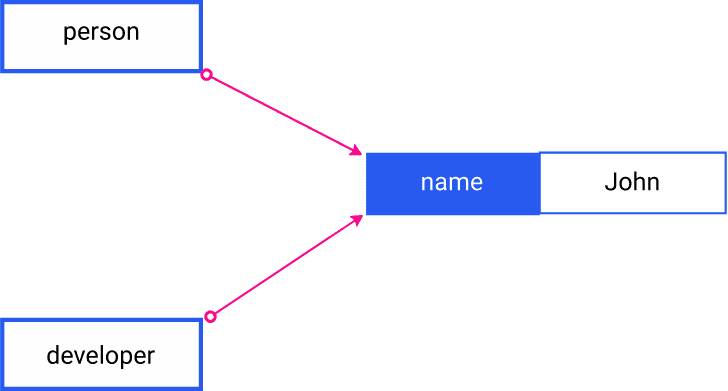 Now, from the memory representation you might be easily figure what would happen when a property of developer is changed:

Now, even though you have just changed the name of developer because of the fact that person is pointing to the same object it is also changed. This behavior holds for arrays or other data types that share the Object prototype.

Note that I'm using const for declaring the variable, but even then there are no errors that are thrown.

This is why people are angry at const, it prevents reassignment and not mutation. If you think you don't mutate, do know that there are some functions in javascript that changes the data structure you are operating on (mutation). Some of these are push or sort in case of arrays. (See Immutable Array Operations)

Some people believe that variables should only be given their minimum responsibilities. Whether this is in the scope they are declared in or whether they can be reassigned or not.

If you are hell bent on using const in all places, you would write something like:

Obviously, this is a choice that you and your team need to make on variables. If you are choosing to go const all the way, you will need to make a note of it and why you are doing it in the style guide and write docs for junior programmers joining your team with solutions to common problems they might encounter.

If you want to go let all the way and avoid the confusion with const all together that's fine too.

If you don't care, well more power to you. ✌️

You can find me on Twitter or Subscribe to my newsletter if you want to stay updated. Thanks.

Save your clients internet, Serving big JSON dataset files over network like a pro

Once suspended, boywithsilverwings will not be able to comment or publish posts until their suspension is removed.

Once unsuspended, boywithsilverwings will be able to comment and publish posts again.

Once unpublished, all posts by boywithsilverwings will become hidden and only accessible to themselves.

If boywithsilverwings is not suspended, they can still re-publish their posts from their dashboard.

Once unpublished, this post will become invisible to the public and only accessible to Agney Menon.

Thanks for keeping DEV Community 👩‍💻👨‍💻 safe. Here is what you can do to flag boywithsilverwings:

Unflagging boywithsilverwings will restore default visibility to their posts.