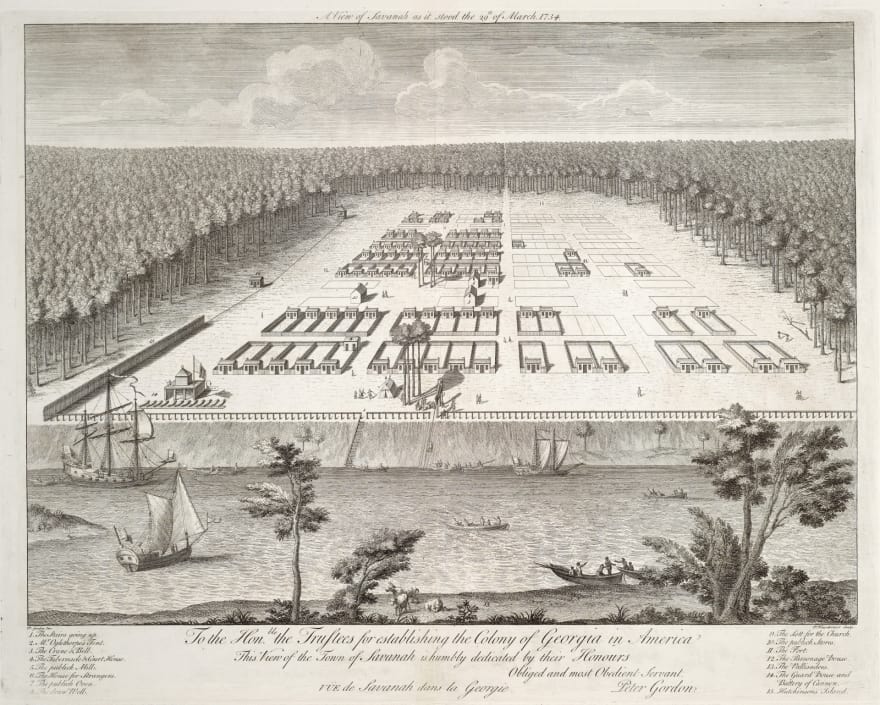 |
| By Pierre Fourdrinier and James Oglethorpe

Once upon a time, before my wife and I had kids, we visited the city of Savannah, GA. We had the opportunity to take a carriage ride through some of the most oldest portions of the planned city. A detail of the tour that has stuck out in my mind was how much of the original street remained unchanged. The reason this stuck out was, as I had found in visiting a few other historic locations on the east cost of the US, many locations as old, if not older, had to be altered to accommodate motor vehicles. So why was that not the case for the planned city of Savannah GA? Because of fires in London. Huh?

The founder of Savannah was James Oglethorpe. Born in England in 1696, he would have been familiar with the fires that ravaged that part of the world in 1666. The great fire of London burned through much of the city due to many factors, one of which was the way homes were built, basically right up against one another. Out of that fire a new approach to city building came into fashion that of having easements between homes to help avoid the spread of fire.

This fascinated me as it turned out that in attempting to address the concern of fire by spacing out plots of lands and having larger pathways between the homes it resulted in a design that allowed the original layout to survive, more or less, down to our modern age.

As time progressed and the advent of items such as cars came along Savannah found it self having plenty of room to allow cars to flow in both directions, for sidewalks to be put in, for construction of sewers and electricity to be distributed all without the need to tear down or reroute the flow of movement.

Understanding the chain of events that caused choices to be made can be one of the most rewarding results in study of history.

So dear reader, what historical tidbits have captured your interest?

The Art of Googling

Inspired by this article from localghost.dev, I've decided to write mine but with a twist. In this ar...

what can you do if the archive.org waybackmachine doesnt go wayback enough ?

The evolution of developer experience in the 20th century

Some Ideas are Ahead of Their Time (Java)

Brian Nipper
@briannipper
Developer always looking to try and get better at this "thing" we do with software. I have found the Joel Spolsky catch phrase is a great thing to strive towards... "Smart and Get's things Done"
work
Solution Architect at Bloomin' Brands, Inc.
joined
Sep 2, 2018