A few days ago I posted about a library I made called typed and it never happened to me before that people would actually use something I made. The thing is that I made typed to be a companion library to resty which is a thin wrapper around Node's http core module.

Resty is what I think is the best way I'd like to write RESTful APIs in Node. It borrows some of its syntax from the fetch API and it is of course type-safe. Let me show you how I'd like to write my endpoints. 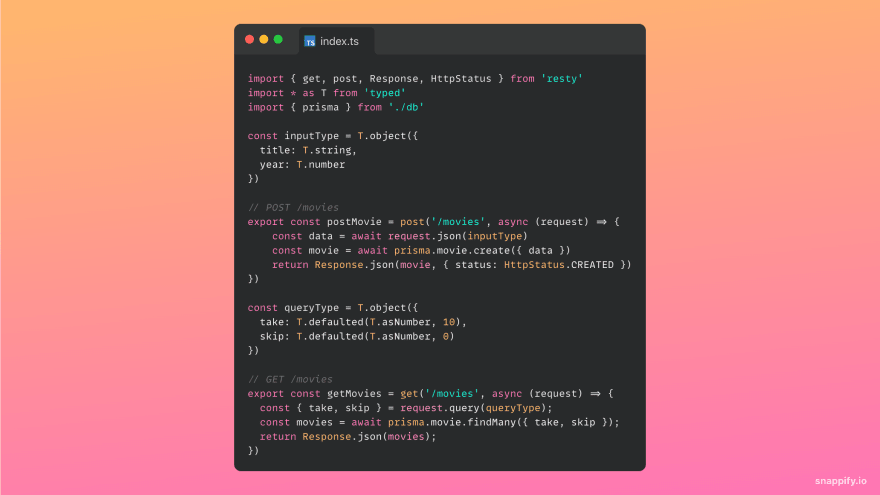 Having an endpoint of about three lines of code is pretty nice to me, specially because there's type-safety involved. Take a closer look at request.json and request.query. They both require a typed function to be passed in. If the validation fails, a 400 Bad Request error is returned with a detailed explanation of what went wrong.

The example above shows multiple endpoints being written in a single file. I personally don't don't use it like this (I prefer to write endpoints in separate files) but for demonstration purposes I'll leave it like this.

So how do we glue the endpoints together? Well, we can use the createHandler function to combine all our endpoints into a single request handler that can be use directly with http.createServer. createHandler will build a radix-tree based router internally which was borrowed and adapted from koa-router-tree which is the fastest router implementation out there, even faster than fastify's find-my-way.

Right now you're thinking "but this doesn't support middleware, how would I enable cors?" Well, resty is just a good old request handler, so you could actually combine it with connect.

The nice thing about doing things this way is that you can test your endpoints the same way you would test an express application with supertest.

I know all cool kids are writing Serverless APIs these days, but I still enjoy writing APIs the old way for simple, personal projects. Anyways, I thought of sharing this library too and hope somebody will benefit from it.

resty adds a very thin layer on top of Node's core http module that provides a beautiful, simple, and easy to use API for building RESTful APIs. It is mostly syntactic sugar, but it also provides a few additional features.

Note that at the time of writing resty has not been fully tested in the real world and is not recommended for production use (yet). You can play around with it on small, personal projects…

Once suspended, brielov will not be able to comment or publish posts until their suspension is removed.

Once unsuspended, brielov will be able to comment and publish posts again.

Once unpublished, all posts by brielov will become hidden and only accessible to themselves.

If brielov is not suspended, they can still re-publish their posts from their dashboard.

Once unpublished, this post will become invisible to the public and only accessible to Gabriel Vaquer.

Thanks for keeping DEV Community 👩‍💻👨‍💻 safe. Here is what you can do to flag brielov:

Unflagging brielov will restore default visibility to their posts.