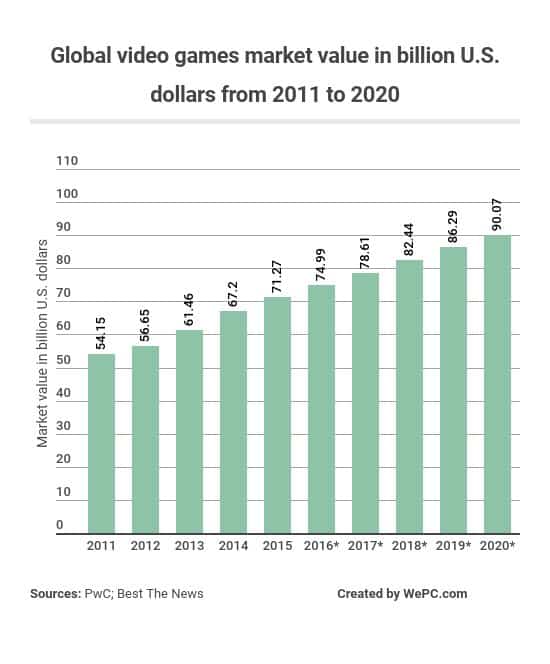 as you can see every year more and more video games are being bought and as a gamer myself I don't see this trend changing anytime soon, games are super popular because there are so many genres with so many companies pumping out games in just about every category and the graphics and stories and levels just keep getting better and better!... but behind every great video game is a poorly credited video game developer team 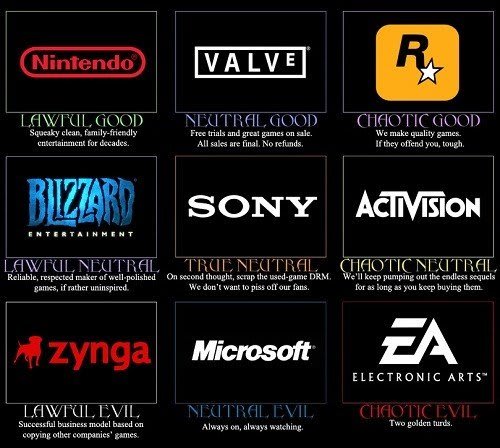 Here are some video game companies that you may know... you may even play games by some of these companies.. I personally am a huge nintendo smash bros fan and participate in melee tournaments when I get the chance pretty often! however when you see these game companies you immediately know what your favorite games by them are.. ok so lets try this Lets look at this list of people

You probably don't recognize any of these names much less the games they helped mostly create... now granted all these men are very well compensated for their contribution to the video game world and are all worth millions of dollars, as a coder that is the secret goal is to be rich for something you made and nobody knows about you... however although I find it odd at first I realize that its pretty normal in the entertainment industry, Usually every movie only has the studios that made it at the beginning, and musicians usually are given the credit but their labels do present themselves all over the product... and in video games and movies and music however there is an end credits where everyone is give their rightful due...

So instead of complaining about it I decided to give these some of my favorite game developers credit and talk a little about their games and what code they used!

Created by the three Gower brothers and published in 2001, Runescape is an MMORP or better known as a Massive Multiplayer Online Role Player, which if you've played any role playing games is pretty easy to understand you are a person born in a world called runescape and you have different skills and levels and quests that you can do and everything is basically controlled with a mouse! such a simple game mechanics and its ability to be afk is what made the game madly popular and still has over 70k active users online almost at all times! although the Gower brothers are no longer with the company jagex, they all walked away very rich worth over 305 million dollars in total...

However we are here to talk about what made their game so revolutionary.. lets begin with what it was written in...

"We write in a scripting language called RuneScript, which our Game Engine team has created specifically for making RuneScape content. The Java-based game engine then reads this RuneScript code and makes it all work. RuneScript is constantly being changed and expanded as we add new features to it to allow it to do new things." - Mod John Jagex Dev Team

Thats right, runescape is written in its own language that is similar to javascript and wiki html, it uses a java engine to translate the code into html

"Hmm, syntax wise it's similar to any C-style language, except variable names are prefixed with their type (eg. %varname is an integer). We also lack full array support. Other than that, it'd do pretty much anything you could do in C or Java." - Mod Chris E Jagex Game Engine QA

Here is some sample code.. if you notice the syntax is very similar to a basic object oriented language such as ruby or java! 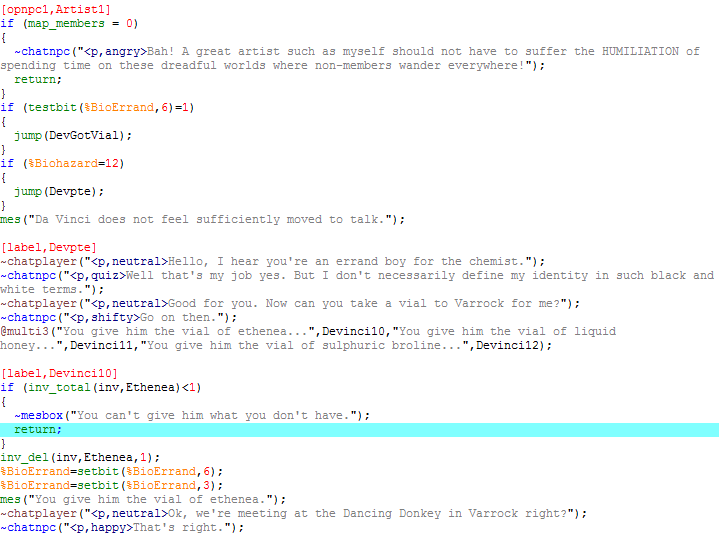 learning about runescript is difficult however and jagex keep it real top secret however they do have forums with active mods who are happy to answer questions about runescript and runescape they keep dev blogs similar to these! @ https://www.runescape.com/community

ahh Sakurai, boy do I love and hate this man.. I love him because he created possibly the greatest video game of all time.. Super Smash Bros melee a cross over fighting game between all of nintendo's video game franchise all stars

However he also divided the community almost released two of the worst sequels ever, blah blah blah he has redeemed himself with the most recent version smash ultimate however today we are here to talk about smash and what it was written in.. which are C++, C and assembly language 6502 personally I don't know alot about these languages and plan to educate myself more but I do know that both Hal Labs and Sakurai's team worked night and day and many overtimes just to get the characters to work and the game to work perfectly, I bring up melee in this blog because till this date it is widely agreed that there has been no game inside and outside the smash bros franchise and fighting game franchises that has been able to match the movement options and fighting style of smash bros melee that mixes king of the hill concepts equally well with fighting game concepts and really somehow made the best fighting game of all time all through an accident, a code they had written to fix "clipping" along the ledges allowed characters to move and slide across the ground and this created a technique called "wave-dashing"

This along with Dash dancing:

and other advanced techniques allowed melee's movement to push the game to become one of the most watched competitive fighting games at most major competitive tournaments with huge crowd and pot prizes over $15k at a time!

See growing up as a kids everyone I knew played Halo : Combat evolved, and until I wrote this blog I never thought about hey I wonder what code Halo was written in, Halo of course is one of the best first-person shooter series of all time, atleast the original series made by bungie and then its arguable if the new halos are really that good or not BUT once again we are not here to talk about my elitist opinions on video games... but we are here to talk about the code behind the game and the people behind it... Bungie was established by Alex Seropian, and their first really successful game was Myth.. dont know much about Myth but it gave them enough traction to be bought out by Microsoft from take two which led to make Halo and actually this is where I started to learn that Runescape having its own language was actually an outlier and that Bungie just like most game developing companies used C++ and Java to create halo and used the same engine as Doom, Call of duty, which is the Quake 3 engine if you guys remember that game which was basically a stripped down version of all these games that they made as a test game of which most modern first person shooters are made and this realization led me to my final conclusion that not all games are original in terms of development yet they are code built on top of engines that already pre exist and then from there its a bit easier to make the game how you want when you dont have to create all the things such as movement and character models from scratch.. although most game developers do end up making their own models they try to avoid having to create a game engine... anyway focussing back on halo, halo would be one of the best selling games of the early to mid 2000's and would eventually loose out to the aforementioned call of duty.. another game built on the same engine also written in C++ The engine however can handle C, C++ and Python.. python games are more commonly found on the nintendo systems where the graphics burden isnt as heavy although I am once again not sure why that would matter for the language itself but its what I have discovered. So as I journey down this path about Game developers and their code I discover my next big target... the GAMING ENGINES!! coming soon to you

Become a Pro in Frontend Development with FrontendPro.dev

Rohit Pratti
just a jawn about coding
Meme Monday 👁
#jokes #watercooler #discuss
How do you motivate yourself to write when so few are reading it?
#discuss #watercooler #meta
Chrome Extensions of the Month - January 2023
#productivity #webdev #javascript #beginners

Once suspended, brohittv will not be able to comment or publish posts until their suspension is removed.

Once unsuspended, brohittv will be able to comment and publish posts again.

Once unpublished, all posts by brohittv will become hidden and only accessible to themselves.

If brohittv is not suspended, they can still re-publish their posts from their dashboard.

Once unpublished, this post will become invisible to the public and only accessible to Rohit Pratti.

Thanks for keeping DEV Community 👩‍💻👨‍💻 safe. Here is what you can do to flag brohittv:

Unflagging brohittv will restore default visibility to their posts.