React is today one of the most popular frameworks for coding UI layers of modern web apps. By the moniker “modern”, I mean an era where best practices have matured for the vast majority of use cases & some level of declarative programming has been achieved (you code what should happen, instead of how to do it).

I think there are two fundamental aspects of React’s popularity (especially compared to the frameworks / libraries used before it):

Here I want to talk about how I implemented a chess transcriber using React (source). 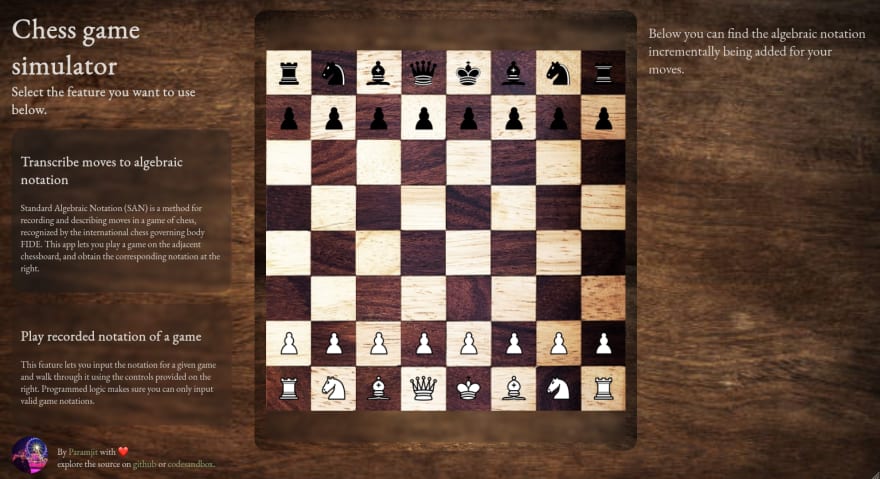 The more I learnt to think in React (and since I wanted to improve the app), I thought through exactly which component needed which data flow and how to arrange them in a well-organized dataflow-lean way. I decided to re-architect the app making the following changes.

This app has been pretty useful to appreciate the underlying design choices of React and to understand when exactly to use (or not) Store libraries. Clean code comes from clean architecture, which requires having a clear idea of what exactly various tools offer, and when they make sense to use. Try out the app, and let me know your thoughts!

Benefits of touch typing for developers

Paramjit Singh
Full stack engineer in Berlin. https://paramjit.org
Your users are not your sole audience

Once suspended, busywhistling will not be able to comment or publish posts until their suspension is removed.

Once unsuspended, busywhistling will be able to comment and publish posts again.

Once unpublished, all posts by busywhistling will become hidden and only accessible to themselves.

If busywhistling is not suspended, they can still re-publish their posts from their dashboard.

Once unpublished, this post will become invisible to the public and only accessible to Paramjit Singh.

Thanks for keeping DEV Community 👩‍💻👨‍💻 safe. Here is what you can do to flag busywhistling:

Unflagging busywhistling will restore default visibility to their posts.