In computer programming, a guard is a boolean expression that must evaluate to true if the program execution is to continue in the branch in question.

Regardless of which programming language is used, guard code or a guard clause is a check of integrity preconditions used to avoid errors during execution. — Wikipedia

The main problems that appear in a code in which the guard clauses technique is not applied are the following:

So, the practical application of a guard clause is the following case: 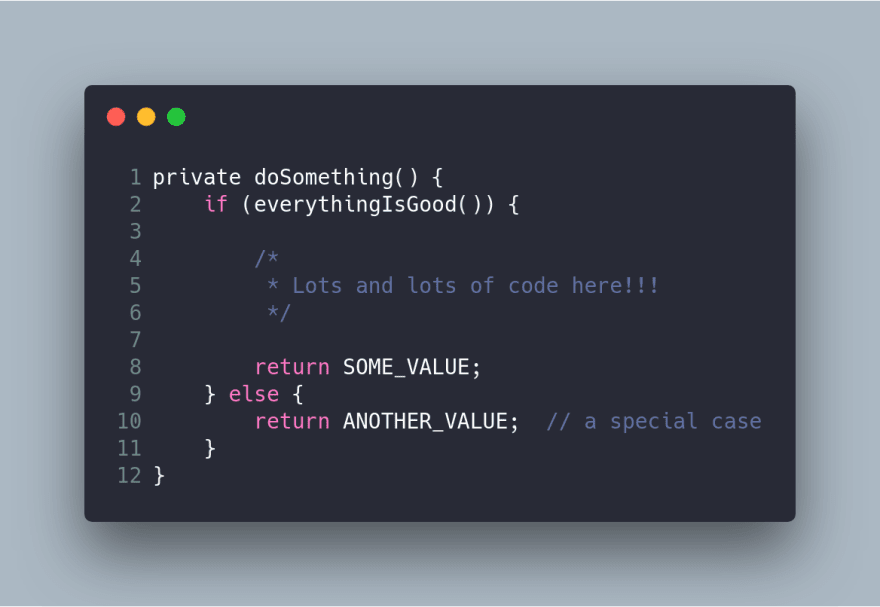 In this case, and most of the time, you must reverse the logic to avoid using the reserved word else. The previous code would be rewritten as follows: 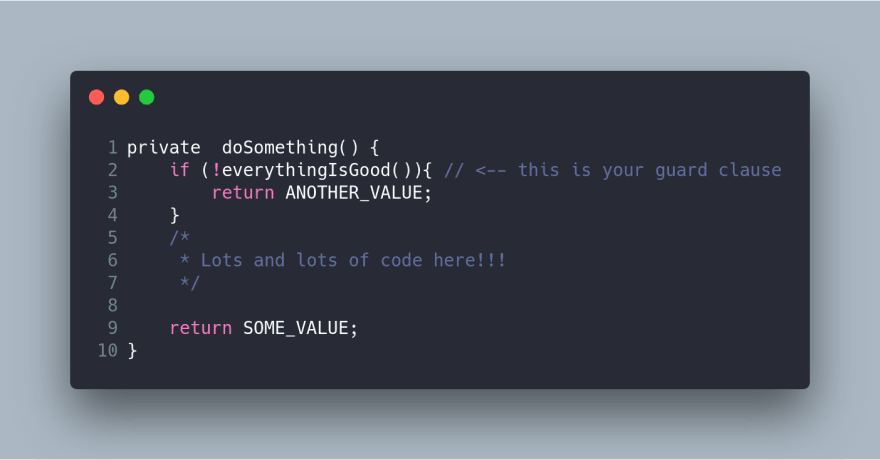 Therefore, the particular cases that cause an exit of the method would be placed at the beginning of the method and act as guards in a way that avoid continuing through the satisfactory flow of the method.

In this way, the method is easy to read since the particular cases are at the beginning of the same and the case of satisfactory flow use is the body of the method.

There are detractors of the guard clauses that indicate that there should only be a single exit point in each method and with this technique we find several exit points. It should not be confused with having return everywhere and without control in our methods that will make us have even greater mental effort. But, all the returns are clearly controlled, since they will be found in the guards or at the end of the method.

Below we will see examples of more complex guard clauses in which the reading and understanding of the code is considerably improved. 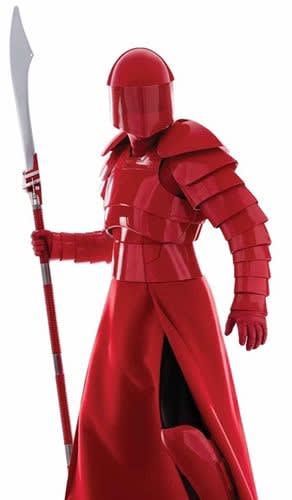 Imagine that you have to create a method that calculates the cost of the health insurance in which the userID is received as a parameter.
A search in a database is done using this ID to retrieve a user. In case the user does not exist, an exception called UserNotFoundException will be throwed. If the user exists in the system, the next step is to verify that the user's health insurance corresponds to one of those that are valid for this algorithm: Allianz or AXA. In case the insurance is not valid, an exception called UserInsuranceNotFoundException must be returned. Finally, this algorithm is only valid for users who are of Spanish nationality. Therefore, you should check again if the user is Spanish to perform insurance calculation or return an exception called UserIsNotSpanishException 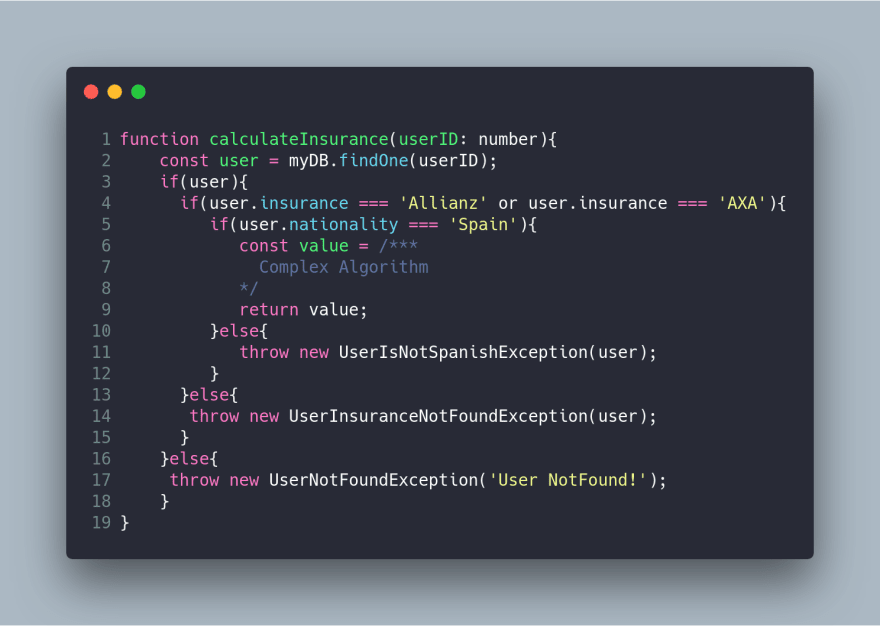 As you can see the code has many levels of indentation. The same version of the previous algorithm is shown below but the guard clauses technique has been applied. This technique allows the code to be more readable. Note that 3 guard clauses have been applied that allow generating alternative paths (throw exceptions) that do not interfere in the algorithm result. 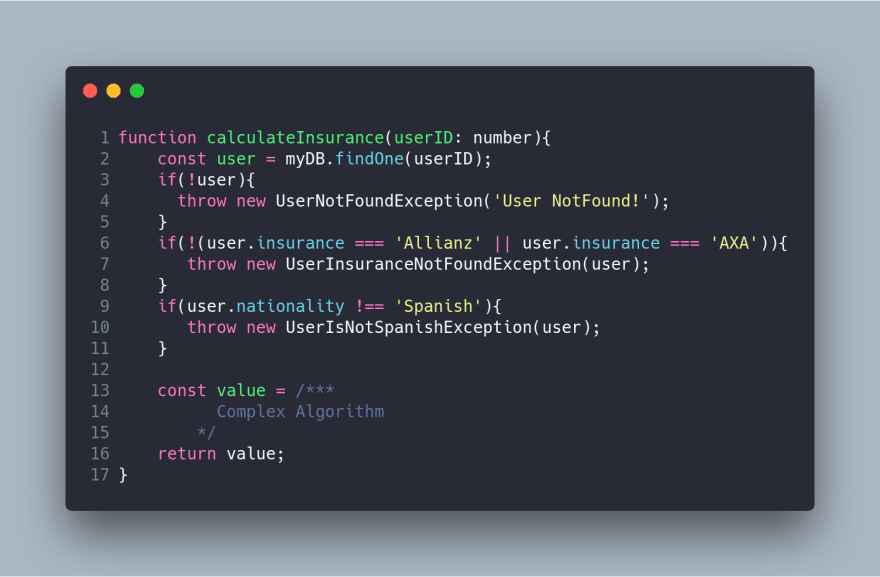 Some questions that must be resolved:

In the use of clause guard the logic of the conditions is normally inverted and, depending on the complexity of the condition, it is quite complex to understand what is being evaluated in that condition.

That is why it is good practice to extract the logic of the conditions in small functions that allow greater readability of the code and, of course, to find bugs in them, since the responsibility of evaluating the condition is being delegated to a specific function.

For our example of medical insurance we can generate the following methods:

It is not necessary to create a function to check if the user exists, since just checking that the user is different to null or undefined is sufficient. Therefore, the resulting code would be the following: 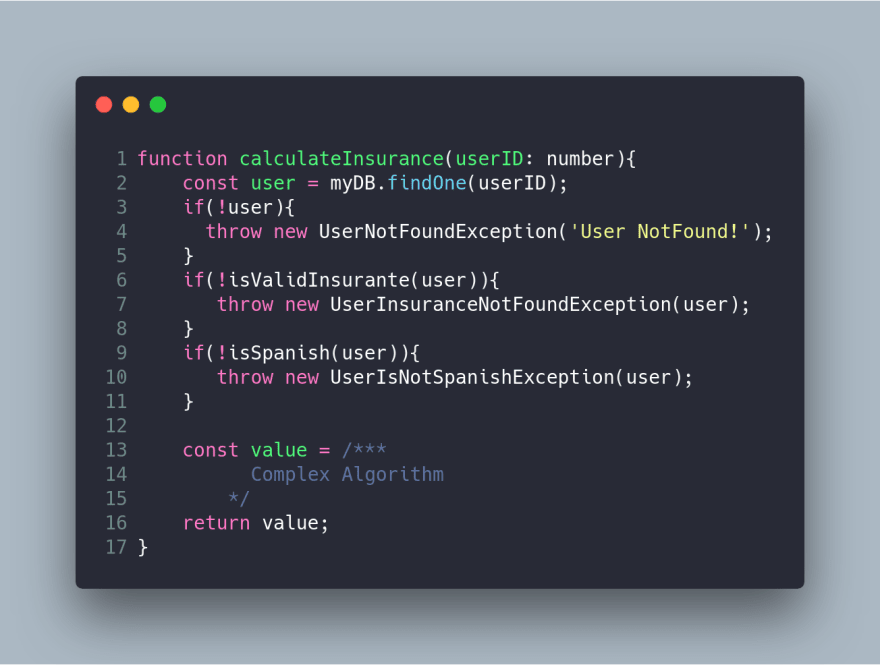 There are many practices in order to improve the quality of the code. The most important thing to learn when applying refactoring techniques is that they should be focused on two points, mainly:

Refactoring starts from the most elementary point, a simple if, to an architecture pattern. It is important to take care of all aspects of our software development.

Originally published at https://carloscaballero.io on May 31, 2019.