Think about your every-day github workflow. You wrap up your code, make sure everything works fine, and then open your terminal. You would then:

Or, if you use the git GUI in an IDE, you would click a bunch of buttons to get your changes sent to your Github/Gitlab/Gitwhatever repo.

Although I have ohmyzsh installed and can run short commands for a lot of git actions (gc instead of git commit, gp instead of git push, etc), I still found the process of committing to Github very...inefficient. Do I really have to write :x! every time? And moving the cursor around to click buttons is always slower than straight typing. How could I make this faster and less error-prone?

I talked with some friends and learned about bash. bash files (extension .sh) combine a programming language with basic shell commands - like git commands!

If I wanted to write a bash script to do my git commits for me, it would need to do the following:

So I did some quick searching, and found the man page for read, and also found that you use variables my typing a $ in front of the variable name.

Writing something like read myvar means you can get user input, and you can use myvar by writing $myvar. Now I had the beginnings of my script:

And, the -s flag makes the read "silent," so it doesn't output the character you pressed.

Cool! Now, I thought I could work this into my script: display the commit message, and then confirm my intent to commit. So then I looked up how to write an if/else block.

Ah, the if/else statement - the basis of beginner programmers and things like IFTTT. In bash, an if/else block looks like:

This is where I started finding errors - things like "Unexpected syntax error near else". Whaaat?

So after extensive searching, I figured out this:

Is there a difference in the above script? In python and javascript, there isn't - spaces don't matter.
But. In shell...
spaces matter.

This was a huge source of frustration for me - it turns out, declaring a variable means you can't have any spaces, but comparing variables requires spaces. That means

🤦‍♀️
I spent 20 minutes figuring this out. I hope by reading this article, you'll avoid the same!

Recalling our previous line of code read -n 1 -s input, and remembering that we can use input as $input: 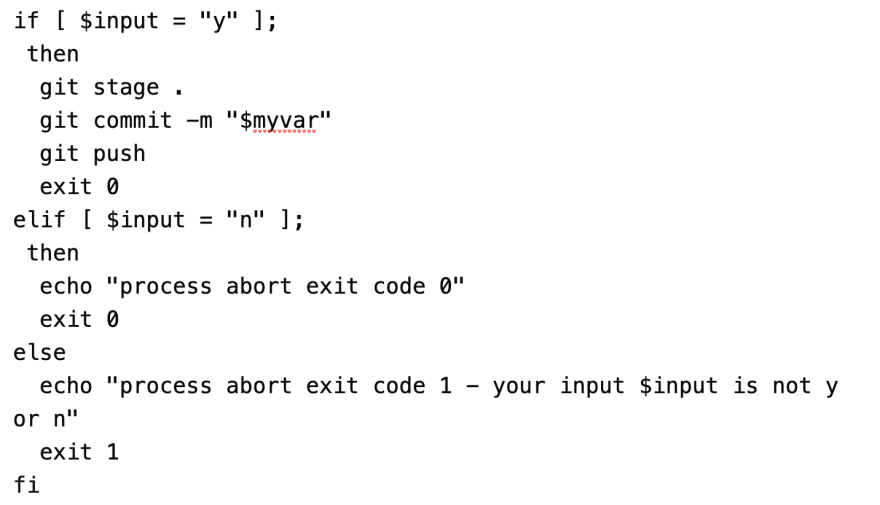 And remember, the thens are important! I forgot the then for the elif statement, causing more headaches.

If I were to make this even better, I might make it so the script asks for a path to repo first, instead of having a hard-coded path. But, it worked and only took about an hour. And it worked!

Anyways, thanks for reading and remember that as a developer, you never stop learning.
Thoughts? Found a typo? Leave a comment!

GIT Under the Hood

Once suspended, carlyraejepsenstan will not be able to comment or publish posts until their suspension is removed.

Once unsuspended, carlyraejepsenstan will be able to comment and publish posts again.

Once unpublished, all posts by carlyraejepsenstan will become hidden and only accessible to themselves.

If carlyraejepsenstan is not suspended, they can still re-publish their posts from their dashboard.

Once unpublished, this post will become invisible to the public and only accessible to CarlyRaeJepsenStan.

Thanks for keeping DEV Community 👩‍💻👨‍💻 safe. Here is what you can do to flag carlyraejepsenstan:

Unflagging carlyraejepsenstan will restore default visibility to their posts.