What is Tailwind css

Tailwind CSS is a utility-first CSS framework intended to ease building web applications with speed and less focus to writing custom CSS, without leaving the comfort zone of your HTML code, yet achieve awesome interfaces.

However, even though Tailwind is considered a framework it doesn't fit under the same philosophy as the others. Tailwind is primarily a utility 🛠 framework or rather a utility bundle.

Utility-class as building complex components from a constrained set of primitive utilities.

Other CSS frameworks like Bootstrap present you with diverse predefined components (such as modals, buttons, alerts, cards). But with Tailwind CSS, you get to make your own, or you’re forced to make your own depending on your project model. Another way to put it, you actually own the components, and you get to harness your customization power on any component of your choice.

This means that there is no more need to fight against the framework, and trying to figure out which classes need to be overridden in order to get results you initially aimed for.

To help you get started, I've included a component example built with utility classes that might be helpful for inspiration on how to create UI interfaces.
Here is the source code is on my Codepen.

In the above example, we have used;

Now I know what you're thinking, "this is an atrocity, what a horrible mess!" and you're right, it's kind of ugly. In fact it's just about impossible to think this is a good idea the first time you see it — you have to actually try it.

But once you've actually built something this way, you'll quickly notice some really important benefits in terms of:
Responsive design, using predefined design systems and styling with Pseudo-classes.

Tailwind provides tools for extracting component classes from repeated utility patterns, making it easy to update multiple instances of a component from one place:

One of the most stressful parts of writing custom CSS is having to name classes. At every point, you’re pondering which class should be generic or specific. How do you organize them and ensure they’re cascaded? Tailwind CSS solves those problems seamlessly by providing utility-based classes that can be used all the time.

3. Designed to be customized

When writing custom CSS, you always have to make changes to your CSS files when making changes in your designs. With Tailwind CSS, you need not worry a bit about that since you’re using the same classes over and over again within the markup

Tailwind uses an intuitive {screen}: prefix that makes it easy to notice responsive classes in your markup while keeping the original class name recognizable and intact.

Tailwindcss playground,is a simple starter project for playing around with Tailwind in a proper PostCSS environment.

Now you should be able to see the project running at localhost:8080. 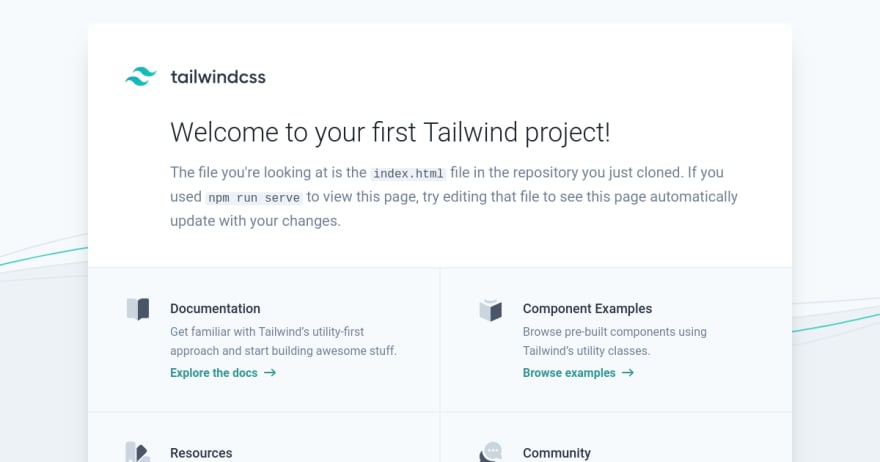 Open public/index.html in your editor and start configuring your project to your expectations!

It generates a 'tailwind.config.js' file which looks like this.

The theme section of your tailwind.config.js file is where you define your project's color palette, type scale, font stacks, breakpoints, border radius values, and more.

I think the idea of utility first approach is the way forward. This gives flexibility to the engineers to build UI's how ever they choose while leveraging the power of the utility. The utility updating under the hood allows to better browser support.

With Tailwind CSS, you get to create the components that suit what you want or what you are working on. These components can be created by harnessing the power of the utility-first prowess of Tailwind CSS. If you are tired of making use of Bootstrap and its likes, you’ll find Tailwind CSS a good fit for working on beautiful interfaces as you implement the designs you need using the utility classes it provides

The Zen of Proverbs

Once suspended, carter will not be able to comment or publish posts until their suspension is removed.

Once unsuspended, carter will be able to comment and publish posts again.

Once unpublished, all posts by carter will become hidden and only accessible to themselves.

If carter is not suspended, they can still re-publish their posts from their dashboard.

Once unpublished, this post will become invisible to the public and only accessible to JeffUbayi.

Thanks for keeping DEV Community 👩‍💻👨‍💻 safe. Here is what you can do to flag carter:

Unflagging carter will restore default visibility to their posts.