One thing that doesn't make sense to me is that you can't just use any language anywhere. In particular, why can't you use Python for client-side web development?

I've been told this is unrealistic for a couple reasons. Performance is cited, as any other language would have to be either compiled to JavaScript, or a large language runtime, hopefully in asm.js or WebAssembly, would have to be downloaded before the actual scripts could be run. The other issue is debuggability: in some other language, you wouldn't be able to inspect and step into your source files in the browser's dev tools. Transcrypt attempts to address both of these concerns.

Transcrypt is a Python compiler, written in Python, that outputs JavaScript. The standard Python implementation, CPython, has some facilities for inspecting the abstract syntax tree of a program, and Transcrypt makes use of these, as well as Google's Closure compiler for generating JavaScript code. Its output is a JavaScript file with exported functions and variables like any other JavaScript file, and with the ability to access external JavaScript variables and functions as well.

Transcrypt aims to be a "90% complete" implementation of Python that favors speed over purity. In my test project, I haven't run into any of the things that are "incomplete". I did run into one small performance issue that was easily fixed. As far as debuggability goes, Transcrypt generates "sourcemaps", which allow you to debug using the browser's devtools.

To try out Transcrypt, I ported a JavaScript program I had written a couple years ago to Python. The program uses the canvas element to draw a bunch of particles, and simulates their movement as they all pull on each other with gravity. Since every particle pulls on every other particle, according to their distance and masses, it's an N^2 algorithm. Not very efficient, but for testing the performance of the compiled code that's not a bad thing. 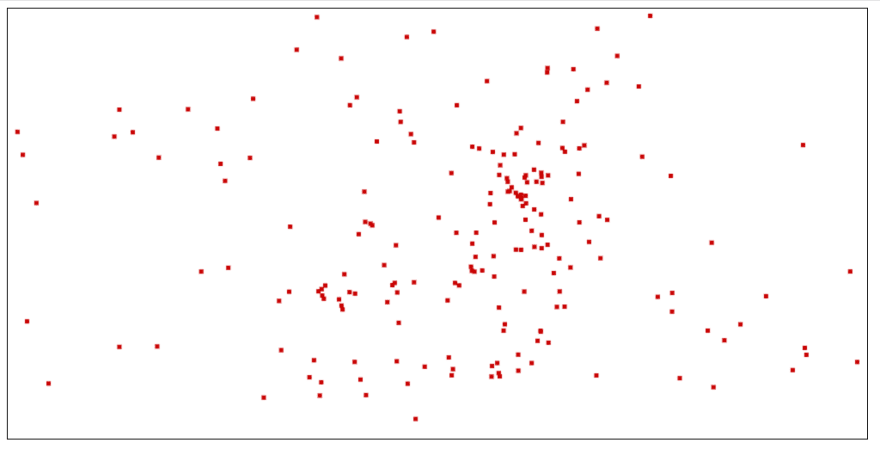 You can't tell, but these particles are all gravitating toward each other.

After some yak shaving to get the right version of CPython installed (the Transcrypt website says 3.6 is required), "pip3 install transcrypt" worked without a hitch.

My approach was to start with an empty python file, move the functions over from the existing JavaScript file one at a time (fixing indentation, braces, etc. as necessary), and after each one recompile it and make sure the program still runs. This worked fine until, at some point, things got choppy.

After moving various pieces back and forth between the Python and JavaScript files, I determined that the problem was this line:

Since it's part of my "trimSpeed" function that's called for every pair of particles (of which there are 200), and the expected time between cycles is 50 milliseconds (or 20 fps), that means this code should be called nearly 200 * 200 * 20 = 800,000 times a second. The reason for the slowness is probably that Transcrypt is creating not just a plain JavaScript object, but a Python "dict".

Since all I'm trying to do here is return the X and Y components of the speed, I could switch to the more Pythonic multiple return statement:

This removed the choppiness.

This could be refactored quite a bit (not to mention my inconsistent abuse of global variables), but I decided to port what was left of it wholesale:

Other than differences of braces, parentheses, etc. this could pretty much be JavaScript code. As you can see, JavaScript APIs like document, window, and canvas are available from within Python code when compiled with Transcrypt.

How big are the files it generates? For a 4 KB Python source file (ent_tr.py), the following files were generated:

I believe ent_tr.js contains the Transcrypt runtime, so there should only need to be one in a given application. ent_tr.mod.js, corresponding to the module represented by the ent_tr.py file itself, is not much bigger than its source Python file. The *.map files are the sourcemaps, so they shouldn't need to be downloaded unless you're debugging.

I think this shows that Transcrypt is fast enough. One thing it appears to lack is the ability to include HTML, CSS, and Python in the same file, as one would with JSX and React. So Transcrypt might not currently be the best language for building user interfaces. One use case would be if you have (or plan to create) a moderately sized Python library that you would like to make available to other client-side code. If you don't want to maintain a separate JavaScript codebase with the same functionality, but want it to be more responsive than if you turned it into a microservice, Transcrypt may be for you.

I hope you found this interesting. I'll hopefully write more on Transcrypt as I continue to experiment with it. What do you think? Is 80 KB too big for a runtime? What benchmarks should we use to determine if it's "fast enough"?

A brilliant blue snake hangs from a tree (out of frame) in front of an out of focus, leafy background. Its large black eye stares at the camera. Does it have a gift for you?

Dustin King
Python. Webdev. Music. Also, other stuff.
Have you had to make your Python code run fast?
#python #performance #discuss
How would you rewrite this Python code?
#python #codereview #refactoring #discuss