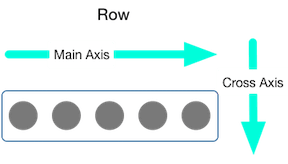 These two pictures are clear to show the meaning of MainAxisAlignment and CrossAxisAlignment.

In a Column, it's the opposite. The children of a column are laid out vertically, from top to bottom (per default). So its main axis is vertical. This means, using mainAxisAlignment in a Column aligns its children vertically (e.g. top, bottom) and crossAxisAlignment defines how the children are aligned horizontally in that Column.

Row/Column are associated to an axis:

Horizontal for Row
Vertical for Column

mainAxisAlignment is how items are aligned on that axis.

crossAxisAlignment is how items are aligned on the other axis.

Once suspended, champ_96k will not be able to comment or publish posts until their suspension is removed.

Once unsuspended, champ_96k will be able to comment and publish posts again.

Once unpublished, all posts by champ_96k will become hidden and only accessible to themselves.

If champ_96k is not suspended, they can still re-publish their posts from their dashboard.

Once unpublished, this post will become invisible to the public and only accessible to Tushar Nikam 💙.

Thanks for keeping DEV Community 👩‍💻👨‍💻 safe. Here is what you can do to flag champ_96k:

Unflagging champ_96k will restore default visibility to their posts.