It's time to get started with the Rails API and React front end. In Part 0, I gave some background about the project, what technologies would be used and why. Feel free to check it out if you haven't already.

To get started with this project, you will need the following installed on your system. Let's get downloading!

Get the right version of Rails

For this project, I'll be using Rails 5.1 (currently the latest is 5.1.4), so if you don't have it, be sure to install the correct version:

Set up the API app

Let's go ahead and generate our new API app:

Not too many changes here, just setting the database to Postgres and using API mode. For testing, this project will stick to the default MiniTest.

Go ahead and look at the directory structure in your text editor or in your terminal with tree. If you've worked with Rails for regular web applications, you'll notice this app is a lot slimmer.

The first changes to make are with the Gemfile and the CORS initializer:

Uncomment the gem rack-cors line in the Gemfile and run bundle install in your terminal.

And in the API directory, open config > initializers > cors.rb, uncomment and modify it to read:

While this API needs a lot of work before it's done, it's a good idea to get in the habit of updating the documentation and keeping track of changes as we go.

You can start by creating a repository in GitHub or another repository hosting service that uses git. It should be fairly straightforward: 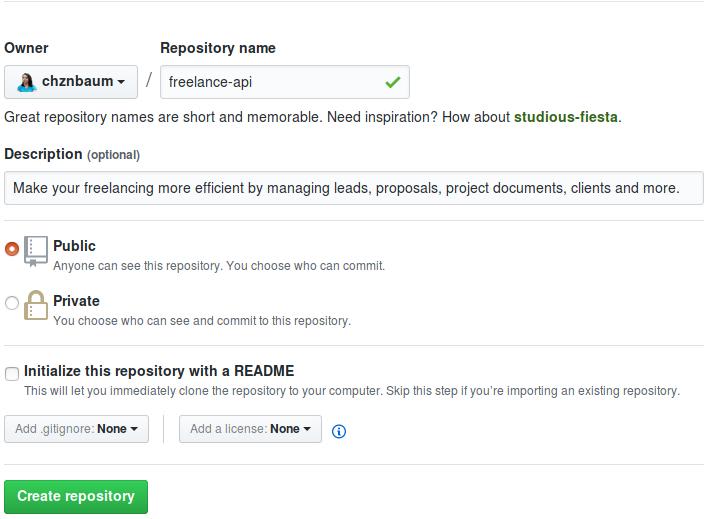 Before adding the files to the repo, it's a good idea to start on some of the basic files you may not feel like working on as the project wraps up: the README, LICENSE, and CONTRIBUTING files.

Your README should already exist, but go ahead and modify it to make sense with what you have so far. For example, right now mine looks like:

There's still a long way to go, but already a surprising amount can be included!

Go ahead and create a CONTRIBUTING.md file and a LICENSE.md file in your project root. My CONTRIBUTING file just lists TBA, and I am using the MIT license for my project.

Now that these documents are set up, the files can all be added to the repository you created.

You're almost done with the basic setup! To create and update the database, go ahead and run:

It seems like we've done a lot without much to show for it, but we've set up the environment we'll need to start giving the API functionality.

At this point, you can test the API out by opening Postman and starting your Rails server in the terminal:

Once the terminal indicates the server is running, in the Postman request bar, send a GET request to localhost:3000. You should see the following: 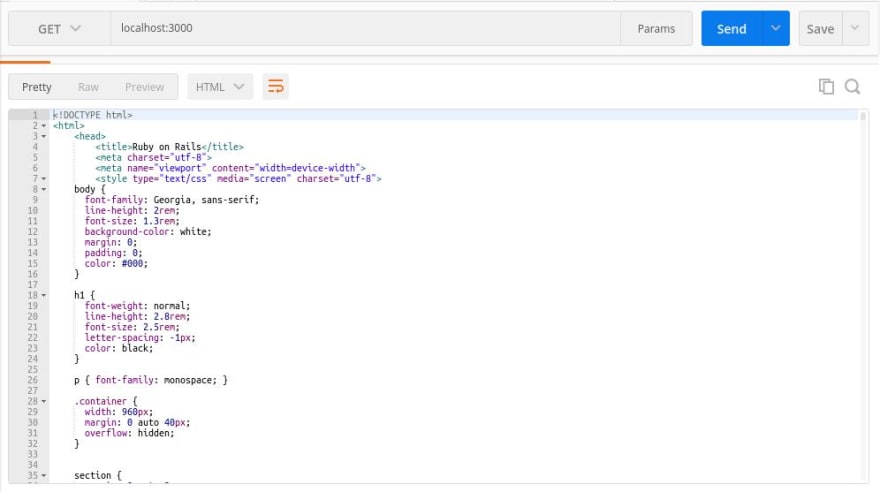 Look deeper into the HTML you received, and you'll see it's Rails' "Yay, you're on Rails!" success page.

With that accomplished, the next step is to actually plan out what the API should do in a little more detail and actually start creating the data models.

Once suspended, chazonacodes will not be able to comment or publish posts until their suspension is removed.

Once unsuspended, chazonacodes will be able to comment and publish posts again.

Once unpublished, all posts by chazonacodes will become hidden and only accessible to themselves.

If chazonacodes is not suspended, they can still re-publish their posts from their dashboard.

Once unpublished, this post will become invisible to the public and only accessible to Chazona Baum.

Thanks for keeping DEV Community 👩‍💻👨‍💻 safe. Here is what you can do to flag chazonacodes:

Unflagging chazonacodes will restore default visibility to their posts.