I originally wrote a tutorial about Var, Let, and Const using Observable Notebook.
In the notebook, you can edit the code, so that you understand by doing.

As a junior dev, it seems like you are told to never use var because the variable can be accessed anywhere, but what does that even mean? Keep reading and hopefully, understand the vocabulary and seeing code examples help. Of course, mess around with code as well.

When you create a variable, you declare it with the keywords let, var, const. Reassign means you are giving the variable another value. var can both be redeclared and reassigned. You will see that it is different for const and let from this table.

Var, let, and const have different types of scope. Scope is the context where variables and expressions live.

hoisting means that everytime you declare a variable, Javascript's engine will immediately hoist (or PULL) those variables up in the beginning of the scope and the variables will be declared. But will they be assigned or initialized?
With var, it will be initialized as undefined, while let and const will not. That is why you get an error 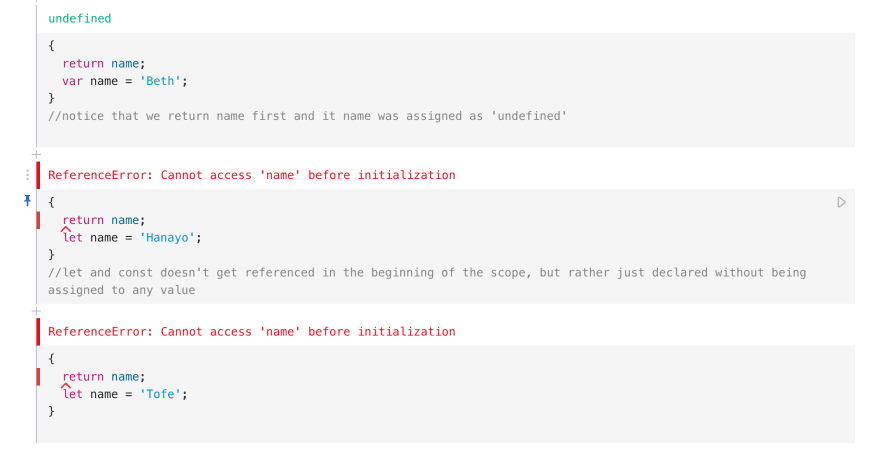 Set up a basic multi-tenant architecture in Rails 7 - 1

Chi
For Beginners: What is a function? My sh*tty explanation 💩
#beginners #codenewbie #javascript #tutorial

Once suspended, chiexplores will not be able to comment or publish posts until their suspension is removed.

Once unsuspended, chiexplores will be able to comment and publish posts again.

Once unpublished, all posts by chiexplores will become hidden and only accessible to themselves.

If chiexplores is not suspended, they can still re-publish their posts from their dashboard.

Once unpublished, this post will become invisible to the public and only accessible to Chi.

Thanks for keeping DEV Community 👩‍💻👨‍💻 safe. Here is what you can do to flag chiexplores:

Unflagging chiexplores will restore default visibility to their posts.