After being scammed out of hard earned money on the Freelancer platform, I did some digging; here is what I found.

I decided to do a little work on Freelancer, I had some spare time and wanted to use my skills to build something I maybe didn't get the opportunity to in my day-to-day. I'd also considered the possibility of one day becoming a full time freelancer, and it was an opportunity to dip my toe in; without having to make any major commitments.

After setting up an account you are constantly bombarded with sales pitches and promotions on how to spend money, even if you're solely there to improve your finances. This in itself is simply an annoyance, as it's overly monetised to the point it feels like a scam before you even begin; you are however placed at a significant disadvantage if you disregard these "benefits". Regardless, I'd seen the 5 star rating on Trustpilot with nearly 4k reviews and I'm ready to get a piece of the pie. 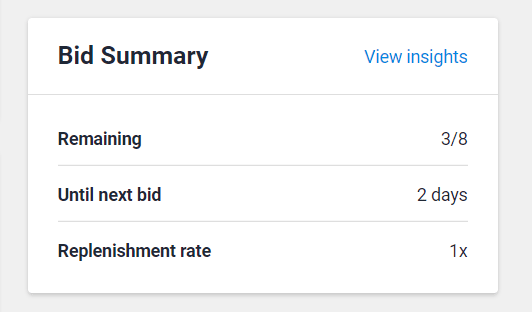 The bidding is rough; there are so many freelancers from countries where the labour costs are so much lower than where I'm located, and the bids are heavily restricted if you don't give them money upfront. I learned fast how to customise my pitch, and make the most of the limitations placed upon me. I received my first job, updating some old code to make a few API calls. I was then employed by the same person to carry out another job, which was another API based task relating to Twitter. I earned around €100, which after Freelancer's cut was reduced by around 10%. The payment came through to my account, the jobs were marked as completed, reviews were left highlighting the positive experience we both had working with each other.

I decided to withdraw my funds, I still felt off about the site and wanted to confirm everything worked end-to-end before committing myself to any other projects. Upon navigating to the withdrawal section I'm greeted with the message above, this is a bizarrely long period of time and it wasn't mentioned at any point prior, but I continue blindly.

It turns out you can't withdraw in Euros, so this needed to be converted to Dollars; of course you're getting the worst exchange rate known to man for the inconvenience. Once you've converted your earnings to Dollars, you're left with your reduced amount to withdraw after waiting for 15 days. 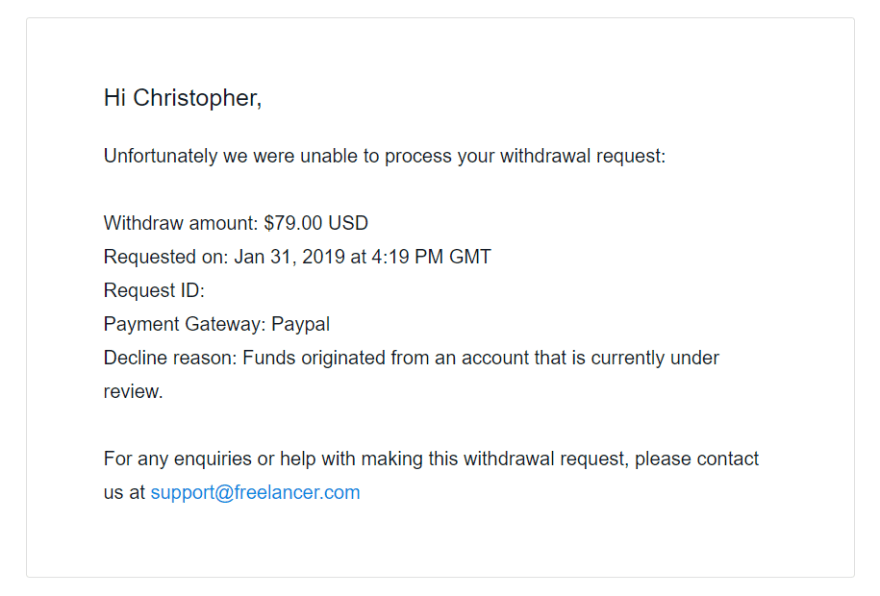 After 18 days I received an email, "Unfortunately we were unable to process your withdrawal request: Funds originated from an account that is currently under review."

At this point I reach out to the person who employed me, who is also a freelancer, who told me they are in the same boat, except the site is holding back closer to $1,000 for him. I'm equally pessimistic with regards to the employer and Freelancer, the money is in my account this makes no sense? I reached out to Freelancer through their online chat feature and was cut off, this has never happened previously when discussing topics other than money. I'm in limbo.

I navigated back to the Trustpilot page I impatiently scanned over at the very beginning of this journey, and I noticed 11% of the reviews are 1 star and filled with serious allegations of fraud. Another review site SiteJabber painted a much bleaker picture, of the 12 reviews on their site 12 are 1 star all of which provide details of serious issues with regards to the freelancing platform. Another site with hundreds of reviews, where you will struggle to find any positive experiences, is highya.

Google, Twitter, Reddit, etc are littered with further examples of people not being able to withdraw their money. There is something seriously wrong with Freelancer. It may work for some, but for a huge number of people it's simply a con. I have no idea if I'll see my money for the work I carried out, but on discovering the significant number of people in the same position as me I had to try and find some version of the truth. Others may not have the same level of financial stability as me, and they are being taken advantage of. I have no idea if any of the positive reviews on their TrustPilot page are legitimate, as I've not been able to speak to anyone who has had a positive experience using the platform. Please let me know your experiences in the discussion.

More examples of similar issues will be added here:

Top 12 Technical Skills Every Software Tester Must Have

How to Hire Dedicated Developers and Succeed in 2023?

Once suspended, chrisdunne will not be able to comment or publish posts until their suspension is removed.

Once unsuspended, chrisdunne will be able to comment and publish posts again.

Once unpublished, all posts by chrisdunne will become hidden and only accessible to themselves.

If chrisdunne is not suspended, they can still re-publish their posts from their dashboard.

Once unpublished, this post will become invisible to the public and only accessible to Chris Dunne.

Thanks for keeping DEV Community 👩‍💻👨‍💻 safe. Here is what you can do to flag chrisdunne:

Unflagging chrisdunne will restore default visibility to their posts.