Overview of My Submission

Buzzwords is a turn based word game about using letter tiles to capture territory from your opponent. It features an extremely low friction link-based multiplayer system that makes it painless to play with a friend.

Try it today at https://buzzwords.gg

The game is at its best when you're playing with a friend, but if you don't have anyone to play with, give the AI opponent a shot!

Choose Your Own Adventure

Running the code for development

By default, the server stores all its data in memory only. To use mongo, drop a .env file in ./server with

Because we're using transactions, your mongo must be a replica set. We're using Atlas for this reason.

Running the code in production

The best way to get to know our game is to try it with, but the next best is probably the (very rough) tutorial I made 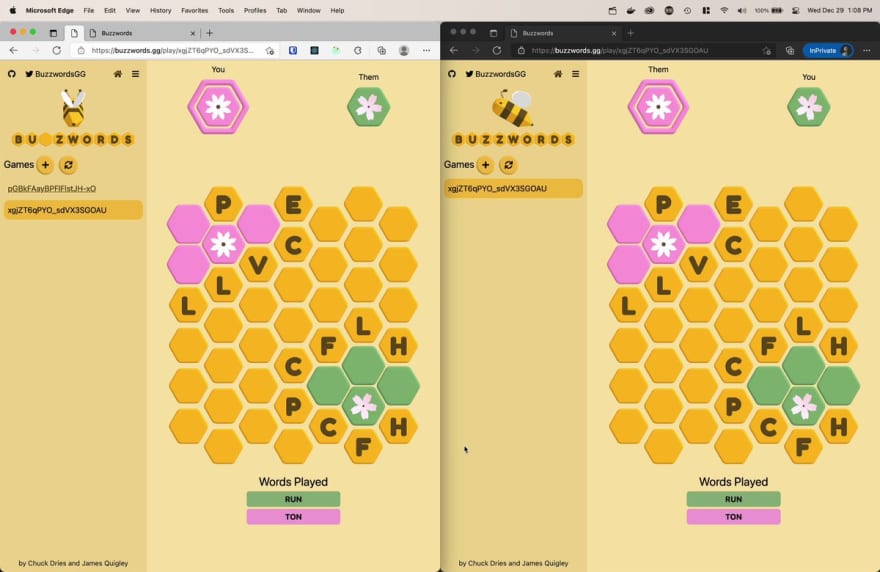 Buzzwords.gg is a free online strategic word game about using letters to capture territory and push back your opponent. Play with your friends just by sending them a link, no sign up required!

The backend is written in Typescript with Express and Socket.io, and of course Mongodb and mongoose.

The frontend is Typescript, React, Redux Toolkit, Tailwind, and the real star of the show: react-three-fiber.

The app is split up into 2d components that render divs and buttons, and 3d components that render Three.js groups and meshes. The game board, for example, is made up of hexagons and flowers that were modeled in blender. React-three-fiber handles rendering these 3d components to a canvas, and lets me handle interactions with 3d elements like clicking and dragging the same ways I would with 2d elements. I'm using react-spring to animate both the 2d stuff (like the sidebar) and the 3d stuff (tiles flipping when they change ownership or swap letters).

What I'm most proud of

Chuck: I love the live syncing of the user's selection to their opponent, it really makes the game feel alive, but I think my proudest work is the replay system. Click on a move in the turns list on the right/bottom (depends on your screen size) to see that move again. I'm really proud of how smooth and flawless it is, even though it kinda clutters GameTile.tsx (I have an idea for how to refactor it already).

James: I love that I wrote the core of the server completely blind, and when we finally had a client to test it with, there were a few small bugs but for the most part it Just Worked.

This hackathon and some time off of work afforded us an awesome opportunity to finally get this project off the ground, but we're far from done.

potential todo list (no promises! this is a free time project for both of us)

Once suspended, chuckdries will not be able to comment or publish posts until their suspension is removed.

Once unsuspended, chuckdries will be able to comment and publish posts again.

Once unpublished, all posts by chuckdries will become hidden and only accessible to themselves.

If chuckdries is not suspended, they can still re-publish their posts from their dashboard.

Once unpublished, this post will become invisible to the public and only accessible to Chuck Dries.

Thanks for keeping DEV Community 👩‍💻👨‍💻 safe. Here is what you can do to flag chuckdries:

Unflagging chuckdries will restore default visibility to their posts.