If you develop with IntelliJ IDEA, PyCharm, GoLand, or other JetBrains IDEs, it’s likely you’ve waited for “indexing” to complete after opening a project. While this may be annoying, it’s necessary for IntelliJ and other heavy-weight IDEs to have features such as code search, highlighting, refactoring, and code completion.

Waiting for an IDE to finish indexing a project might not be a big problem for many workflows. After the first load, indexes are cached and subsequent runs are faster. However, indexing time can be a huge blocker for developers, especially in these cases: 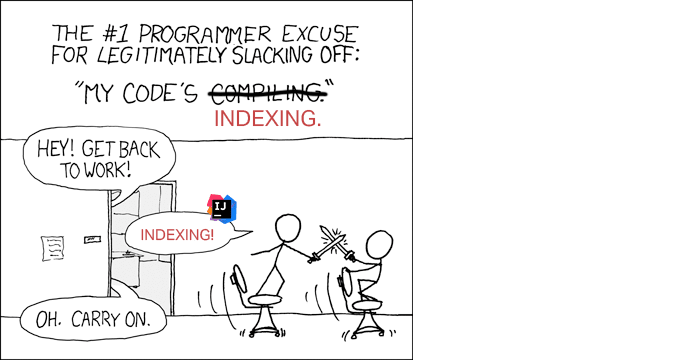 In this post, we’ll cover how shared indexes can significantly reduce IDE load times, share some examples, and a one-line command to generate these for your project. (Historically, shared indexes have been difficult to set up)

Indexing works by traversing the project’s codebase to create a “virtual map” of classes, methods, and objects for future lookups. After the index is generated, it is cached on your device for later use.

Indexing a codebase will likely take the longest the first time you open it on your machine. When the codebase changes, such as pulling code or switching branches, your indexes will “update,” but significantly faster than the first time.

Shared indexes make it possible to host pre-generated indexes for others to download, significantly improving loading speeds across your team. These remote indexes work in conjunction with local indexing to ensure your IDE always has up-to-date information on the codebase.

Generating shared indexes for your project

JetBrains has a guide for creating shared indexes, but it involves many steps, including downloading custom tooling and uploading indexes to a CDN. It also lacks instructions for automating this process, to generate indexes in CI, for example.

Using a Docker container to generate shared indexes makes it simple to try locally or automate with cron/CI:

After generating indexes, you can upload the output folder to your CDN, or a local server. You can also use shared indexes without a CDN by using a network share or even your local filesystem for testing. Check out my GitHub repo for details:

I tested indexing time for some popular projects on my 2019 MacBook Pro. To benchmark your own projects, File → Invalidate Caches in your IDE will allow you to opt in/out of downloading shared indexes to simulate first launching your project.

These times were averaged across two test runs. Your mileage will vary depending on network speeds, device performance, etc.

Recently, JetBrains released remote development support, making it simple to develop from powerful, remote workspaces. On-demand workspaces have a lot of benefits, such as faster onboarding and better reproducibility. However, first-time indexing happens much more frequently, since, after all, workspaces are meant to be ephemeral.

Shared indexes work with Coder, our remote development platform. Coder supports all JetBrains IDEs locally, or via the web browser. If you don’t want to host a CDN for shared indexes, you can include them in the workspace image, so everything loads in a snap ⚡

If you’d like to learn more about Coder, you can request a demo or try it for free.

Coder
Moving development to your cloud

Help us reimagine the future of software development!

Once suspended, coder will not be able to comment or publish posts until their suspension is removed.

Once unsuspended, coder will be able to comment and publish posts again.

Once unpublished, all posts by coder will become hidden and only accessible to themselves.

If coder is not suspended, they can still re-publish their posts from their dashboard.

Once unpublished, this post will become invisible to the public and only accessible to Ben Potter.

Thanks for keeping DEV Community 👩‍💻👨‍💻 safe. Here is what you can do to flag coder:

Unflagging coder will restore default visibility to their posts.