OpenCV is widely used, Adopted all around the world, for end users, it’s very mature and powerful, for developers it's well implemented and designed. The OpenCV developers used very basic principles which makes it very simple to understand and maintain.

A library-based architecture makes the reuse and integration of functionality provided more flexible and easier to integrate into other projects.In addition, the library based architecture encourages clean APIs and separation. Therefore making it easier for developers to understand, since they only have to understand small pieces of the big picture.

OpenCV adopt this approach and defines many libraries, each one has a specific responsibility and all of them uses the opencv_core library.

OpenCV uses widely namespaces to modularize its code base, here are for example the namespaces of the opencv_core project: 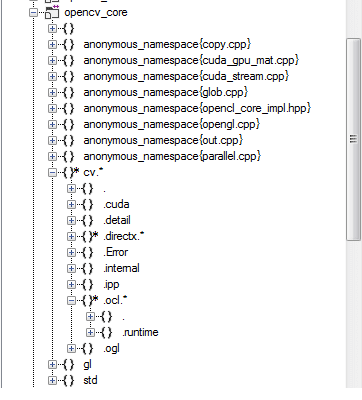 In case of OpenCV the namespaces are used for three main reasons:

Each project has its data model, it’s recommended to defines these data as POD types.

Let’s search in the OpenCV code base for structs with no methods and having only fields. For that CQLinq will be used to query the code base. 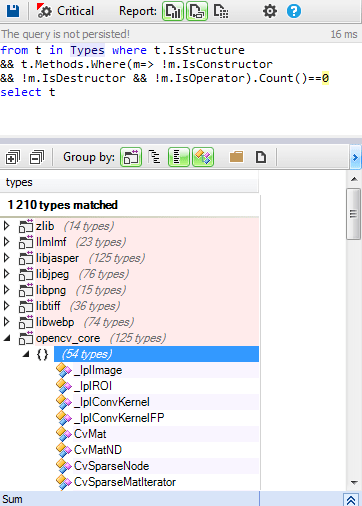 The result of this query concern 25% of the number of types defined in OpenCV projects. OpenCV defines almost all its data model in structs with only fields.

Using multiple inheritance could complicate the design, debuggers can have a hard time with it, therefore it’s not recommended by many C++ experts.

Let’s search which classes inherit from more than one concrete base class in the OpenCV code base. 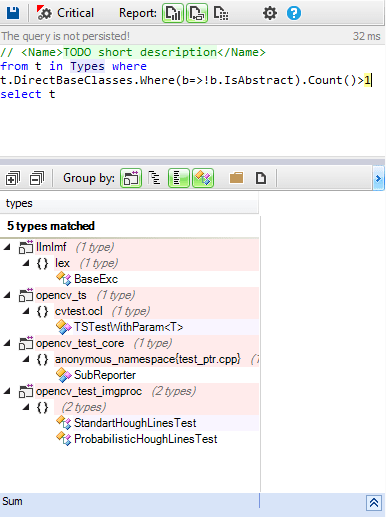 Only a few classes from test projects use the multiple inheritance, this concept is avoided in the whole OpenCV code base.

Many metrics exist to detect complex functions, NBLinesOfCode, Number of parameters and number of local variables are the basic ones.

There are other interesting metrics to detect complex functions:

Let’s search for methods that could be considered as complex in the OpenCV code base. 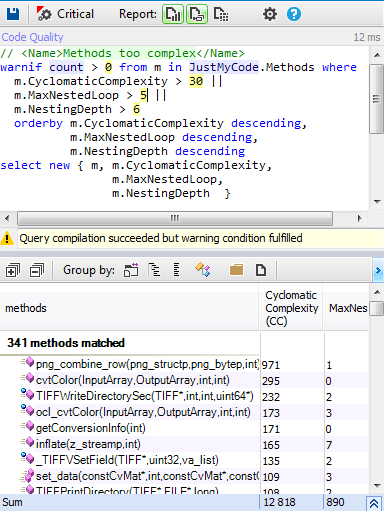 Only 1% is a candidate to be refactored to minimize their complexity.

Low coupling is desirable because a change in one area of an application will require fewer changes throughout the entire application. In the long run, this could alleviate a lot of time, effort, and cost associated with modifying and adding new features to an application.

Low coupling could be achieved by using abstract classes. Here are three key benefits derived from using them:

Let’s search for all abstract classes defined by OpenCV : 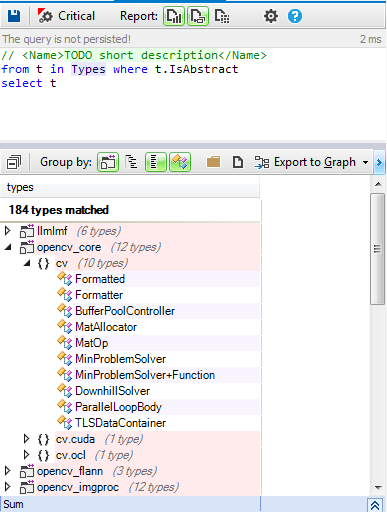 If our primary goal is to enforce low coupling, there’s a common mistake when using abstract classes, that could kill the utility of using them. It’s the using of the concrete classes instead of abstract ones, to explain better this problem let’s take the following example:

The class A implements the abstract class IA which contains the calculate() method, the consumer class C is implemented like this

public class C
{
….
public:
void calculate()
{
…..
m_a->calculate();
….
}
A* m_a;
};
The class C instead of referencing the abstract class IA, it references the class A, in this case, we lose the low coupling benefit, this implementation has two major drawbacks:

C# introduced the explicit interface implementation capability to the language to ensure that a method from the IA will be never called from a reference to concrete classes, but only from a reference to the interface. This technique is very useful to protect developers from losing the benefit of using interfaces.

The single responsibility principle states that a class should not have more than one reason to change. Such a class is said to be cohesive. A high LCOM value generally pinpoints a poorly cohesive class. There are several LCOM metrics. The LCOM takes its values in the range [0-1]. The LCOM HS (HS stands for Henderson-Sellers) takes its values in the range [0-2]. A LCOM HS value highest than 1 should be considered alarming. Here are to compute LCOM metrics:

LCOMHS value higher than 1 should be considered alarming. 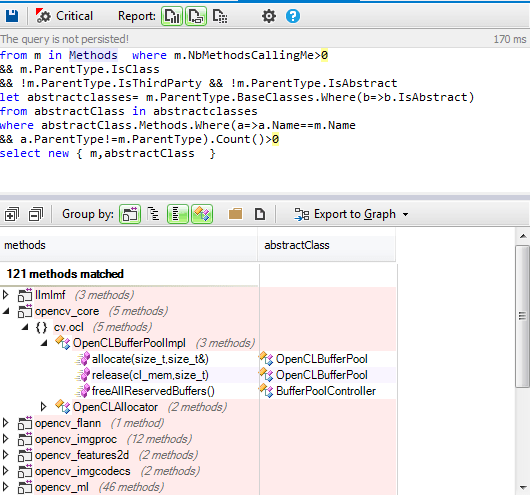 Only a few types are not cohesive.

If you take a look at the OpenCV source code, you will be surprised by the simplicity of its implementation, no advanced design concepts are used, no over-engineering, just some basic principles applied.

CoderGears Team
Insights from the CppDepend Team
How to Optimize Your Code for Performance
#beginners #programming #productivity #codenewbie
What was your win this week?
#discuss #weeklyretro
Cures for burnouts??
#webdev #productivity #discuss #codenewbie

Once suspended, codergears will not be able to comment or publish posts until their suspension is removed.

Once unsuspended, codergears will be able to comment and publish posts again.

Once unpublished, all posts by codergears will become hidden and only accessible to themselves.

If codergears is not suspended, they can still re-publish their posts from their dashboard.

Once unpublished, this post will become invisible to the public and only accessible to CoderGears Team.

Thanks for keeping DEV Community 👩‍💻👨‍💻 safe. Here is what you can do to flag codergears:

Unflagging codergears will restore default visibility to their posts.