This article was originally published on Codica Blog.

Over the past years, we’ve heard a lot about different marketplaces. All because extremely popular AliExpress, Etsy, eBay have paved the way for the multitude of followers. That is evidenced by the yStats.com report suggesting e-commerce marketplaces to be the most used channels for corporate purchasing.

The stakes are high here. Entrepreneurs give a lot of attention to customer experience and the performance and security of their websites. That’s why the choice of the technology stack is vital for e-commerce development.

In this post, we will explain why we are so confident that Ruby on Rails is a perfect framework for marketplace development.

About Ruby on Rails

Ruby on Rails (or RoR) is a framework for Ruby programming language. It was released by David Heinemeier Hansson in August 2004. He wanted to create a syntax that is intuitive, compact, and easy-to-understand. We feel sure about this – he made it right. RoR boosts programmers’ productivity thanks to its simplicity in use and high development speed.

Ruby on Rails philosophy suggests adhering to the principles presented below:

The figure below demonstrates industries with the biggest RoR websites presence: 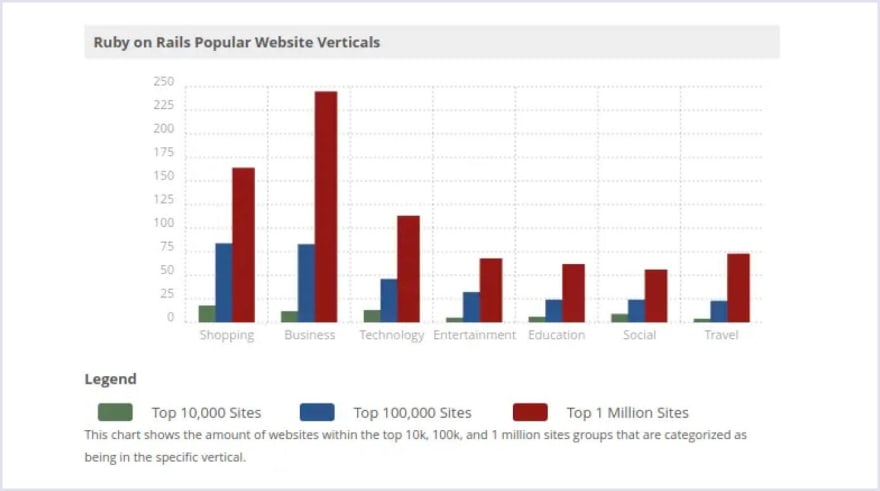 As you can see, online marketplace development provides the largest numbers in using the RoR framework. Such well-known platforms as Airbnb, Fiverr, Shopify, and Couchsurfing are built with RoR.

Why you should choose Ruby on Rails for your marketplace

Using Ruby on Rails is an effective way to cut back the marketplace development time by 25-50% compared to other popular frameworks. This is one of the reasons why startups like this framework. RoR saves the programmers’ time due to its lean code base and the use of the modular and object-orientated programming principles.

And of course, not the least reason to create with Ruby on Rails is a great number of Ruby gems. These free, open-source packages contain Ruby libraries that can extend or modify the application written in Ruby by distributing reusable functionality and specific features. This dramatically reduces the building of e-commerce platforms.

Let’s take a look at the Ruby gems’ statistics, including the total number of libraries and downloads: 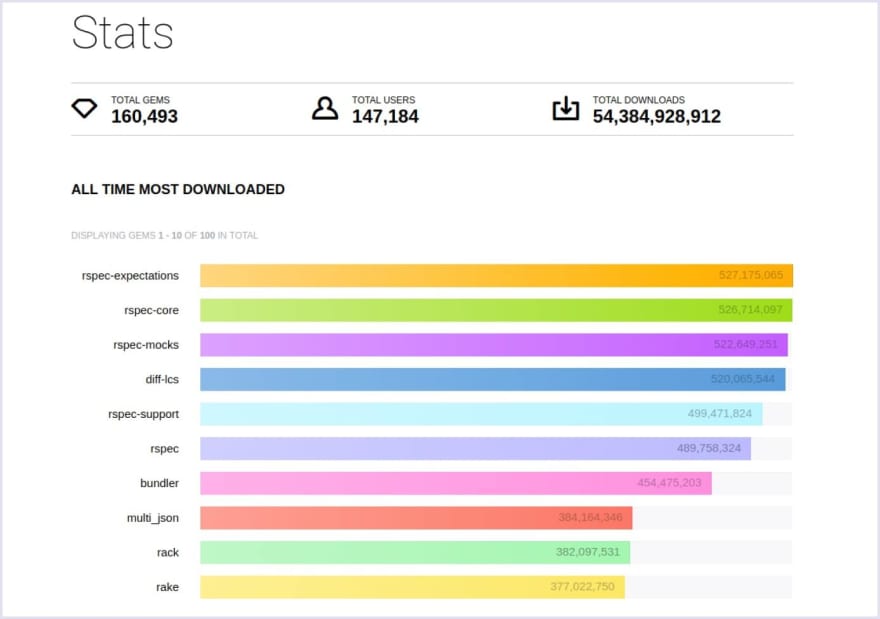 The commercial success of online marketplaces made them a sweet spot for cybercrime. There are a number of ways to make use of gaps in the security of e-commerce platforms. For starters, cyber-criminals may get access to your sensitive data by introducing their malware to your system. Besides, credit card fraud and e-skimming are never dismissed.

The consequences of digital crime may be crucial. Business owners can lose their revenue and also the trust and confidence of their customers.

So it is absolutely necessary to make security your top priority. Ruby on Rails perfectly fits for marketplace development, because it takes security seriously, providing in-built security means. With RoR behind your back, Cross-Site Scripting, Cross-Site Request Forgery, and SQL injection will not bother you.

No one can argue that the launch of an online marketplace might be an expensive business. That is why the ways to keep costs down might come in handy. And Ruby on Rails marketplace development provides a great chance to do so.

To begin with, RoR is a free open-source framework with the support of many free databases and servers. Also, in addition to gems, Ruby on Rails developers can use a wide variety of free library extensions and utility classes.

Furthermore, this technology allows for rapid prototyping. It significantly reduces time to market of a minimum viable product (or MVP) of your marketplace. It means you can show your MVP to investors and potential users to get desired feedback in short order.

It is a necessity to make sure that your online marketplace will be able to maintain large traffic with increased loads and a growing number of requests. And the scalability of RoR is really helpful with this matter. The numbers below are here to prove this fact.

And what is important – all services listed above rely on Ruby on Rails for their marketplace development.

Shopify is the leading cloud-based multi-channel platform for e-commerce. Also, it is a prominent example of why it is a great idea to cooperate with an RoR development company for building the e-commerce platform.

In 2004, Tobias Lütke was thinking of launching an online store that offered snowboard products. He decided to use the help of the brand-new framework that was Ruby on Rails at that moment.

Now Shopify is a well-structured and user-friendly e-commerce website that gives business owners the opportunity to launch and manage online stores.

It has been more than 15 years since the launch of the platform, and Spotify still gets the most out of RoR development. The company can boast of impressive revenue of $1.578 billion, hosting over 800,000 stores. And not the least reason for this success is fueled by the power of Ruby on Rails framework.

Ruby on Rails framework is a popular choice for marketplace development due to its high security, cost-efficiency, scalability, and decreased development time. This is the reason why we are so passionate about RoR development.