At the end of this lesson, you should be able to answer the following:

Imagine if you had to repeat a task many, many times. Even if it was a simple one, like saying "Happy Birthday to you!", you'd probably get tired of doing it after more than a few times.

Not computers, though. They are great at doing the same things over and over again. They will happily repeat tasks, faster than we are capable of, until programmed to stop - or until they run out of resources.

Type the code above in your code box and run the code. You will see that C# has done that task without complaining. And in 0.4 seconds too! 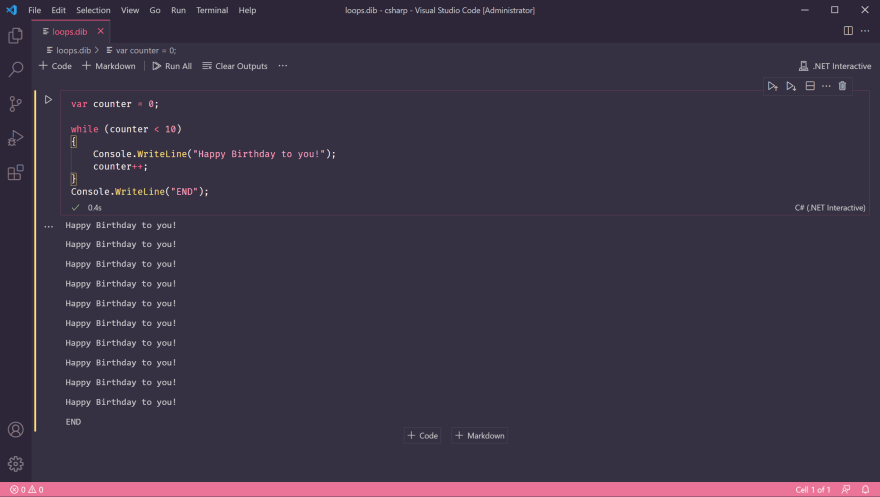 Let's break down the code.

First, we declared a variable called counter with a value of 0. This counter will hold how many times we have run the loop.

The next statement is a while loop block. Just like the if statement in the previous lesson, the while statement block consists of a keyword (while) followed by round brackets that contain the loop condition.

The condition can be an expression, and the result of the expression must be a bool or Boolean value. If the condition is true, our program enters the loop body, the part surrounded by the curly brackets. The statements in the loop body will then be executed.

In plain words: while a condition is true, keep doing something!

This is why Line 6 is very important. counter++ is shorthand for counter = counter + 1. We are increasing the value of counter by 1, then assigning that value to counter again.

We do this just before the loop body ends. When our program returns to the loop condition to test it, the value of counter has changed.

Let's make our program print out the value of counter so it's easier to see how the loop is working.

Add the following line after counter++;.

Run the program. You will see the value of counter increasing after every iteration of the loop. 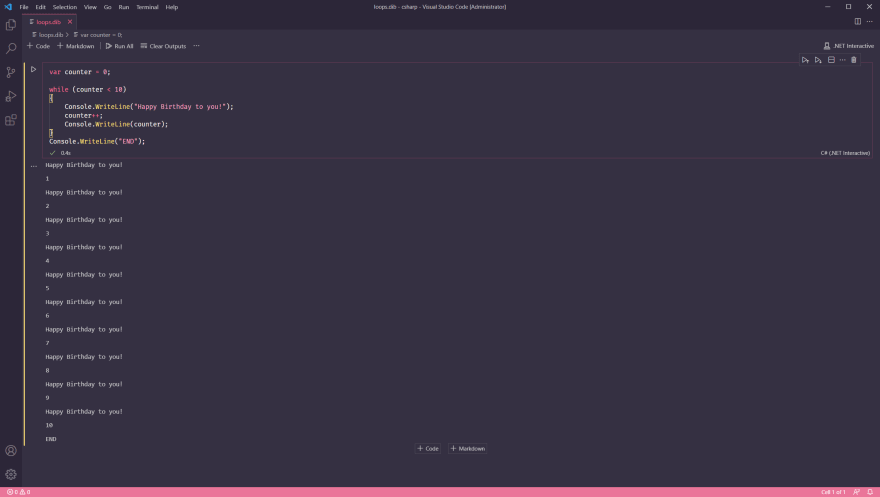 When counter has reached 10, the program tests the condition counter < 10 for the last time. Because 10 is not less than 10, the condition is now false. The program exits the loop body and goes to the next statement outside, which is Console.WriteLine("END").

If we remove counter++ and run the code, the condition counter < 10 will never become false. Our program will enter an infinite loop!

An infinite loop is a loop that never ends. The only way we can stop it is if we forcibly terminate the program, or the computer runs out of memory.

The loop structure we have described is so commonplace in C# that we can declare it in a more concise manner using the for loop syntax.

This syntax might look weird at first glance. But let's break it down first. You'll find that the expressions in the round brackets are already familiar to us.

First, we don't need to declare the counter variable separately anymore (Line 1 in our original program) - it is now declared within the for loop, inside the round brackets.

The next part is our loop condition (Line 3), which is still counter < 10.

And the all-important Line 6 earlier - the statement that increases the value of counter - is the last expression inside the round brackets.

You can see that by using a for loop, we've shortened the program from 9 lines of code to 5 lines. We have moved some statements into expressions inside the round brackets.

The statements inside the curly braces is still our loop body, which will keep executing as long as the condition (the middle expression) is true.

Find the error in this program. (Hint: Compare the syntax with the sample program above.)

What is the output of this program? (Hint: -- is an operator that decreases a value by 1.)

Convert the code above to use the for loop syntax.

Using a for loop, get the sum of numbers from 1 to 10. Print the sum to the console.

Hint #1: You would need to declare an extra variable before the for loop that would hold the sum.

Hint #2: For every iteration of the loop, you have the current number and the current sum. You would need to add them together to get a new value for the sum.

Hint #3: The statementsum = sum + number would evaluate sum + number first, then the result of that expression is assigned to sum, giving sum a new value.

Once suspended, coding_mama will not be able to comment or publish posts until their suspension is removed.

Once unsuspended, coding_mama will be able to comment and publish posts again.

Once unpublished, all posts by coding_mama will become hidden and only accessible to themselves.

If coding_mama is not suspended, they can still re-publish their posts from their dashboard.

Once unpublished, this post will become invisible to the public and only accessible to Kristina (Coding Mama).

Thanks for keeping DEV Community 👩‍💻👨‍💻 safe. Here is what you can do to flag coding_mama:

Unflagging coding_mama will restore default visibility to their posts.