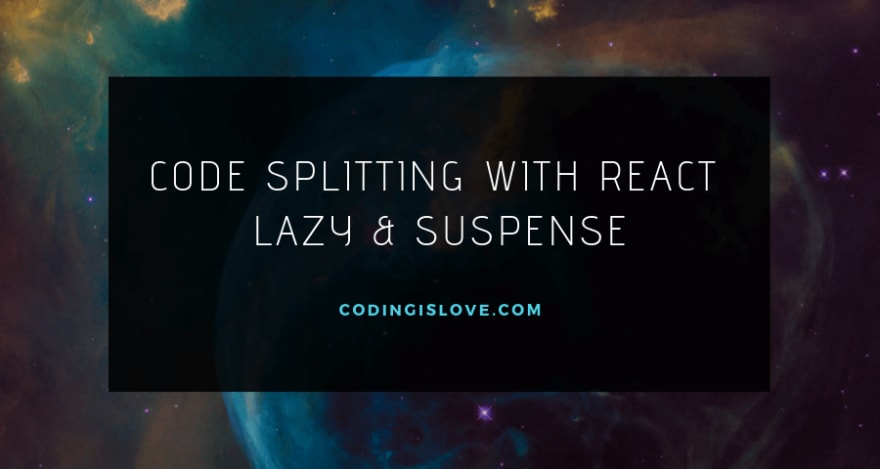 The initial load is critical for any application. A developer should optimize application so that application will load faster even on a slow network.

Being a developer we are always interested in adding third-party libraries so that we can save time and effort of writing our own code. After this, we have to take care of the bundle size. We should make our application to load fast even after adding lot third-party libraries.

After working on react for the past two years, I could tell it was a little difficult to optimize your app using Webpack or other tools. Webpack is a great tool it provides numerous ways to optimize your app but you need to spend a lot of time and effort to learn and to apply them on your app.

Code splitting is a technique of dividing large bundle into small piece of bundles and then load them on demand whenever required.

Usually, In a JS app, The entire app’s JS is bundled into one JS file and that entire JS file is loaded when the first time app is opened. This causes some wait time for the initial app to be shown which can be resolved using code splitting.

In React 16.6, React itself provides an easy way to optimize your app with minimal effort. Now I’m going to show you the optimization techniques without using any tools in React 16.6 with React.lazy and React.Suspense

Now we are going to learn about all these features. Let me give you short intro to these two features.

This function helps us to load a component on-demand just by changing a single line of code. All we need to do is replace regular import with dynamic import.

This is used to wrap the lazy loaded components with fallback (loading indicator). This fallback component is shown while a lazy component is being loaded.

These two features will help us to optimize application by loading component when it is required and stop re-rendering when props are same as previous props.

Lazy loading is very helpful when your application has many routes. We can load each route code when user click on specific route. The only difference between regular components and lazy loaded component is the way we import it.

This is how we import a component normally.

This is how we import dynamic component and pass it to React.lazy. 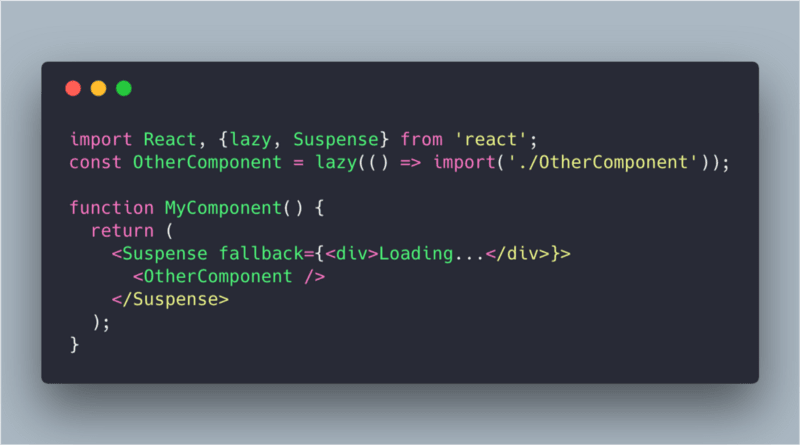 Fallback accepts any react element as a value. Let me show an example of Single page application with 3 routes with lazy() and without lazy() to see how it optimizes bundle size.

Let’s see a small demo. In this demo app, I have used react-router to show the demo of how individual routes are loaded on demand and dynamically.

When we load react router app in the browser all the routes will be loaded at a time and it will take time to load all the routes. With React.lazy and Suspense, we will load routes on demand.

If you see the below network requests, the first image shows without lazy and suspense that’s why the size of the bundle is 705KB, second image show with lazy and suspense code. Now the bundle size is reduced to 415 Kb initially and when you click on the second route 280 kB will be loaded on demand. This is the beauty of React.lazy and React.Suspense.

On demand second route is loaded on click on route

React.lazy and React.Suspense will help us to load our app fast. We can defer rendering of unwanted components and we can reduce the size of bundles

Coding is Love
Coding is Love is an award-winning blog on programming & development with coding tutorials, best practices for developers and walk-through of latest technologies.
Marvel’s Shang-Chi – What if he was a web developer? | Web Multiverse
#webdev #css #humor #javascript
12 commonly used Javascript Array methods that you should know
#codingtutorials #coding #javascript
Rythm.js, A javascript library that makes your page dance | Spotlight of the day series
#spotlightoftheday #css #html #javascript

Once suspended, codingislove will not be able to comment or publish posts until their suspension is removed.

Once unsuspended, codingislove will be able to comment and publish posts again.

Once unpublished, all posts by codingislove will become hidden and only accessible to themselves.

If codingislove is not suspended, they can still re-publish their posts from their dashboard.

Once unpublished, this post will become invisible to the public and only accessible to Coding is Love.

Thanks for keeping DEV Community 👩‍💻👨‍💻 safe. Here is what you can do to flag codingislove:

Unflagging codingislove will restore default visibility to their posts.