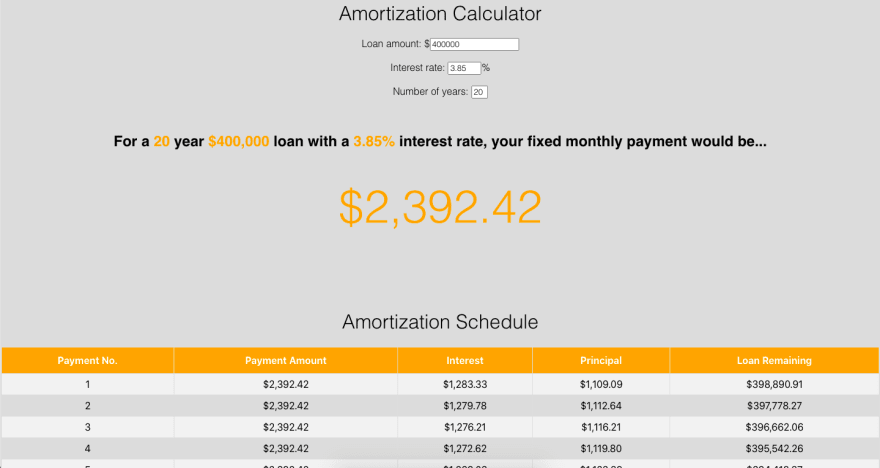 To solidify my programming skills, I decided to create and deploy a compound interest and amortization calculator.

In the Compound Interest Calculator, a user can find the compound interest accrued in an investment by supplying the investment's starting amount, interest rate, number of years, and compounding interval (monthly or yearly). If a user wanted to determine their monthly payment on a loan, they could use the Amortization Calculator. The Amortization Calculator will automatically generate an amortization schedule, which each month shows how much of their monthly payment will go toward principal and interest.

The app, which I call Money Calculators, was made with React. I decided to try the useState react hook to add internal state to my functional components. useState allowed me to code the project without a single React class component. Basically, useState creates two variables: a variable that holds a specific slice of the component's current state and a function that will update that state. You can think of a React component's state like a global variable - accessible in any function inside that component.

The most challenging part of the project was getting rid of the submit button in my forms. This way, the user can change form input values and immediately see the new result. For instance, if a user has filled out all the form boxes for the compound interest calculator, they will see a number on the screen. If they decide to update a form box, they will get a new compound interest calculation right away.

This was my first time publishing an application of mine to the Internet, so I was pretty nervous putting my app on Heroku because I didn't want to mess anything up. In the end, I succeeded by doing the following:

Most Awesome Hooks for your React project