Consuo is a cloud-agnostic software component to generate virtual linear TV channels, and in this blog post we will describe how you can deploy this component to AWS and not having to manage any server instances.

Amazon ECS (Elastic Container Service) is a container management and orchestrator of Docker containers running on a cluster. With the Fargate launch type you run your cluster on a serverless infrastructure, and this is what we will use in the example.

Let us begin with the task definition for the Consuo Schedule task. Some parts are left out to highlight the Consuo specifics.

We then define a similar task definition for the Consuo Engine.

At the moment we have a placeholder for the CHANNELMGRAPI variable and we will later replace it with the URI that the Consuo Schedule API will be accessible on. In both task definitions we define that we want to use Fargate as the launch type for these tasks.

When creating the services we will use each of the task definitions defined above and service type REPLICA and launch type FARGATE. For the Schedule service you need to ensure that the security group allows TCP traffic on port 8001 and for the Engine service open up port 8000, as this is what we specified in the task definitions. Number of replicas we set initially to 1.

Once everything is setup you will then be able to access the Consuo schedule service on for example: http://alb-consuo-486438318.eu-north-1.elb.amazonaws.com:8001/api/docs/

And now you can update the CHANNELMGRAPI variable to point to for example http://alb-consuo-486438318.eu-north-1.elb.amazonaws.com:8001.

If you don't intend to have the schedule accessible outside of the cluster we could use the service discovery functionality and have the Consuo schedule container only accessible by the Consuo engine container. That is left as an exercise for the reader.

To off-load the traffic to the Consuo engine service it is recommended to place a CDN in front of it. With AWS we can use their CDN service Cloudfront to do this. This also gives a possibility to have SSL termination which is today needed to be able to play the stream in a browser. You create a distribution where you specify the ALB as the origin and origin port 8000. Important to configure the distribution to Use Origin Cache Headers and query string whitelist channel. You might also want to override the caching TTLs for error codes such as 404 and 500, to avoid getting 404s stuck in the caches.

When everything is up and running you will now have a system setup that looks similar to this drawing. 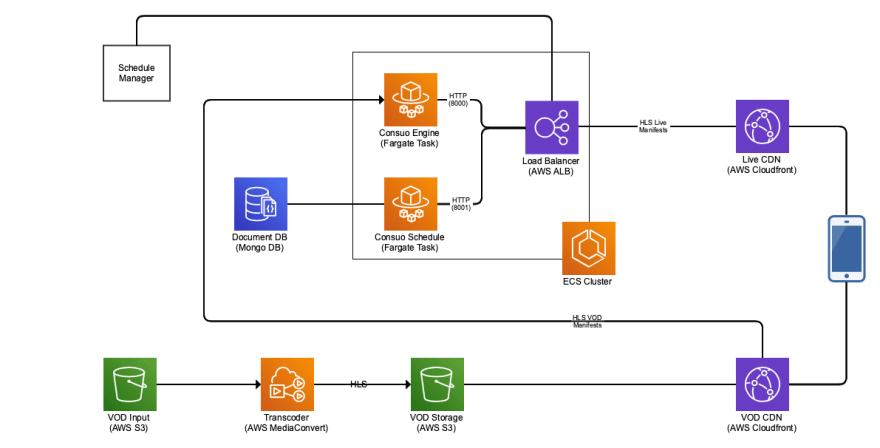 Register for a free 30-days trial for Consuo.

Once suspended, consuo will not be able to comment or publish posts until their suspension is removed.

Once unsuspended, consuo will be able to comment and publish posts again.

Once unpublished, all posts by consuo will become hidden and only accessible to themselves.

If consuo is not suspended, they can still re-publish their posts from their dashboard.

Once unpublished, this post will become invisible to the public and only accessible to Jonas Birmé.

Thanks for keeping DEV Community 👩‍💻👨‍💻 safe. Here is what you can do to flag consuo:

Unflagging consuo will restore default visibility to their posts.