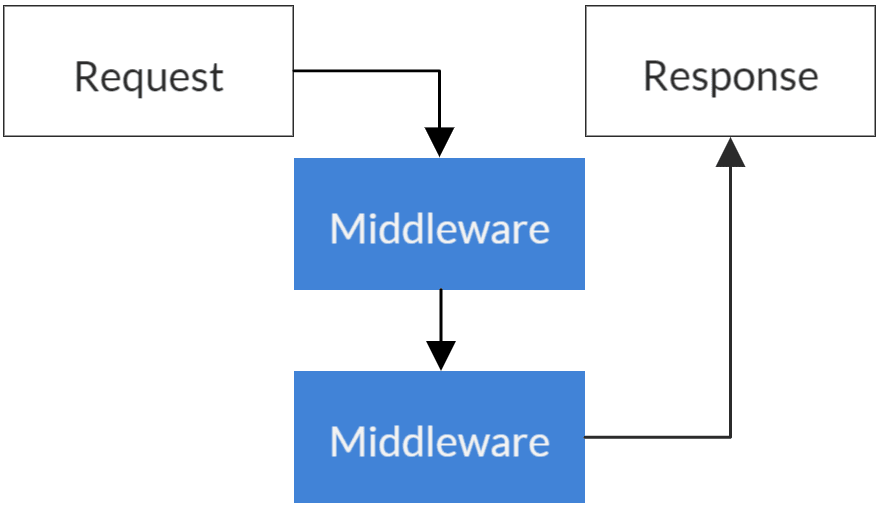 If you've created an ASP.NET Core app before, you are probably aware of the UseDeveloperExceptionPage middleware. This middleware adds special exception handling. If an exception is thrown later in the pipeline, the exception bubbles up to this middleware, which returns a nice page with details as a response to the request. Because middleware is a pipeline, order matters. For the developer exception page, it's important that it is one of the first middleware added to the pipeline.

For this guide, I'm starting with a project creating using dotnet new web. This command creates an ASP.NET Core project with the minimum amount of boilerplate.

Use is a another middleware we can use. It is not necessarily a terminal middleware, like Run. It can be terminal or non-terminal depending on whether the next middleware is called. Use will be how we write our first custom middleware.

Let's add some custom middleware to our Startup.Configure method.

We added a logger and an app.Use section. This is always a non-terminal middleware, because we call next.Invoke for all code paths within the middleware. To try this out, run dotnet run and navigate to http://localhost:5000. You should see Hello World! on the page, and something like this in the console:

So we've created a super simple custom middleware that logs when a request is started and completed. Cool... but what else can we do? Let's make some changes to our app.Use block...

Now, our middleware is terminal when the request path starts with /test, returning the response Welcome to Test. To verify, navigate to http://localhost:5000/test. For routes that don't start with /test, we just pass-through to the next middleware.

You've likely noticed that we have access to the entire HttpContext in our middleware. We can check whether the user is authenticated, pull information out of the route, and read the body of the request. Of course, those are just some examples of the information we can get from HttpContext.

That's All for Now

Middleware is a pretty deep rabbit-hole, so I'm going to call this post here. I have more to write about, but that will have to come in later posts - I don't want to overload post with everything. Visit my personal site at http://austincooper.dev to subscribe and be notified when Part 2 comes out.

Once suspended, cooperaustinj will not be able to comment or publish posts until their suspension is removed.

Once unsuspended, cooperaustinj will be able to comment and publish posts again.

Once unpublished, all posts by cooperaustinj will become hidden and only accessible to themselves.

If cooperaustinj is not suspended, they can still re-publish their posts from their dashboard.

Once unpublished, this post will become invisible to the public and only accessible to Austin Cooper.

Thanks for keeping DEV Community 👩‍💻👨‍💻 safe. Here is what you can do to flag cooperaustinj:

Unflagging cooperaustinj will restore default visibility to their posts.