💡If data encryption can be compared to washing your hands, then searching over encrypted data without decrypting it is like using hand sanitizer on-the-go: saves time and gives you more flexibility.

Let us introduce an article on what “secure search over encrypted data” really is and how it is possible nowadays. We cover overview of existing approaches, their downsides, typical attacks, and ready-to-use tools for searching over encrypted data in SQL and NoSQL databases.

With a significant shift towards remote workforces fuelled by “software as a service” trend in enterprise computing, cloud data storage is set to gain traction.

This move entails a renewed push to data encryption during the whole dataflow (meaning, data stays encrypted almost all the time), which keeps it safe against leakage, outsiders, internal threats, and untrusted service providers alike.

However, encryption makes it harder to search over data once it is encrypted, which is both what encryption is needed for and a huge operational downside.

In a perfect world, it would be convenient to keep the data encrypted and still be able to securely search over it, without constraining the application architecture. Well, and today it is possible.

Users store data encrypted in a database, yet keep the ability to run simple queries on encrypted fields without decrypting them.

Encrypted search is based on blind indexing with probabilistic bloom filters (see a paper on IACR), and built around AES GCM and HMAC. Building compound encryption indexes allows users to perform even sophisticated queries over protected data.

When an app inserts a sensitive field to the database, Acra builds a special “blind index” for that field and encrypts its content. Database stores blind index and encrypted field separately or in one column (in most cases, storing them separately gives better performance). 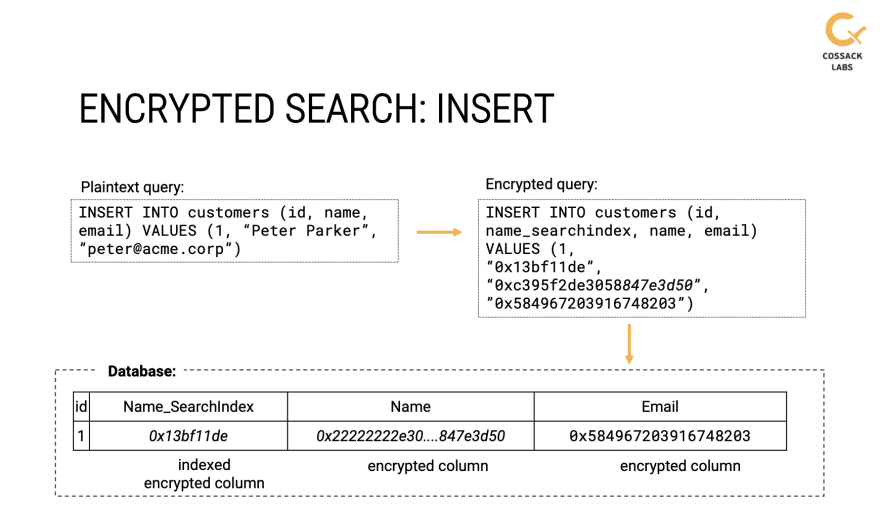 When an app performs search (select) on an encrypted field, Acra builds blind index for searchable query, database searches in blind index column. Encrypted field stays encrypted until Acra decrypts it, and the database doesn’t know what data is stored and searches in. Application gets decrypted data from Acra if blind indexes match (or are close enough). 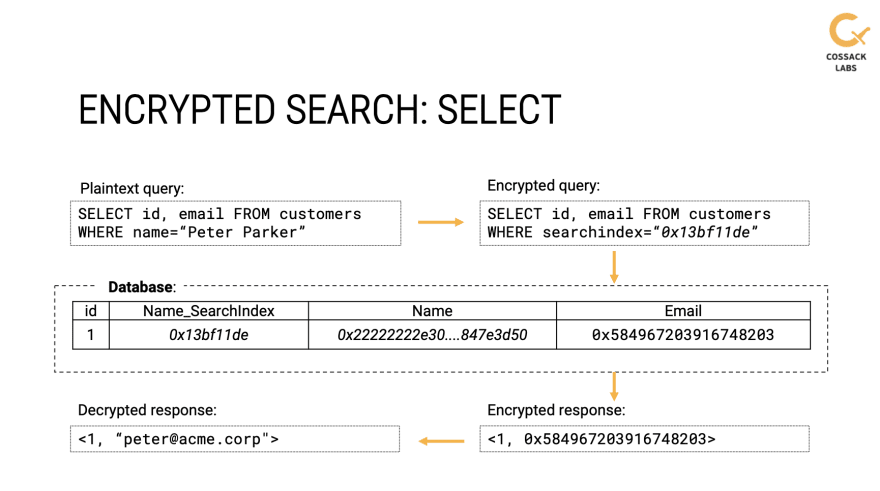 ⇪ Searching in encrypted data leads to searching in blind index, and only if match found, decrypting data.

There are lots of approaches to searchable encryption, but many remain purely academic.

In our article, we explored the methods of secure search over encrypted data, including with our own technology called Acra Searchable Encryption (Acra SE). It is described in a scientific paper on IACR and available along with many other data protection features in Acra security suite.

Click to read the article in full and welcome back to discuss the topic here.

✨ Keep in touch or try searchable encryption in Acra

Acra Searchable Encryption is part of Acra Enterprise Edition and is not available in open source version. If you’re interested in searchable encryption and would like to try Acra, drop us a line, we’ll setup a demo stand for you.

How to sign your commits with GPG or SSH keys

file validation in python Much easier and more reliable

Once suspended, cossacklabs will not be able to comment or publish posts until their suspension is removed.

Once unsuspended, cossacklabs will be able to comment and publish posts again.

Once unpublished, all posts by cossacklabs will become hidden and only accessible to themselves.

If cossacklabs is not suspended, they can still re-publish their posts from their dashboard.

Once unpublished, this post will become invisible to the public and only accessible to Cossack Labs.

Thanks for keeping DEV Community 👩‍💻👨‍💻 safe. Here is what you can do to flag cossacklabs:

Unflagging cossacklabs will restore default visibility to their posts.