In the beginning, a love affair

For the last 10 years or so, I have been a die-hard Vim user. I was introduced to Vim on my first programming job. It was almost an instant connection for me. I fell in love with the minimalism of only needing a terminal to do work; and the power of stringing together commands, like words, to edit programs and text.

The love affair I have with Vim stuck with me throughout my career and remains strong to this very day. When I was a junior-level release engineer, working on small scripts, Vim was amazing. Later, working as a Ruby on Rails Engineer, Vim was still an amazing editor. Thoughtbot, Hashrocket, and countless other agencies, companies, and individuals contributed to the community (and cult) of Vim. That community pushed my knowledge, comfort, and understanding further and further.

Eventually, I was running tmux and Vim together in the terminal. With sufficient plugins and dotfiles, I was CRUISING through codebases. I could write tests, run them, refactor code, and run commands with absolute ease. 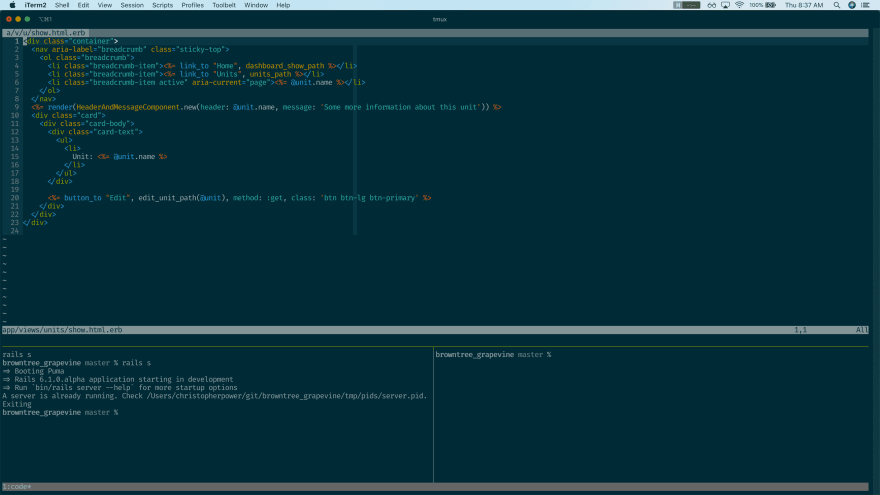 Vim and tmux... were so amazing

Lately, though, I have been feeling a little underwhelmed by Vim. Even with my sophisticated dotfiles, knowledge, and Plugin setup; something felt off. I started a new job working on a large typescript React project. Vim couldn't handle opening a TSX file larger than 50 lines without crashing.

Within the last few years, I tried my hand at programming mobile applications. Flutter and Dart -- although supported by an LSP -- was not running very well on my Vim setup. After giving Android Studio a shot with Flutter, it felt like a whole new world. 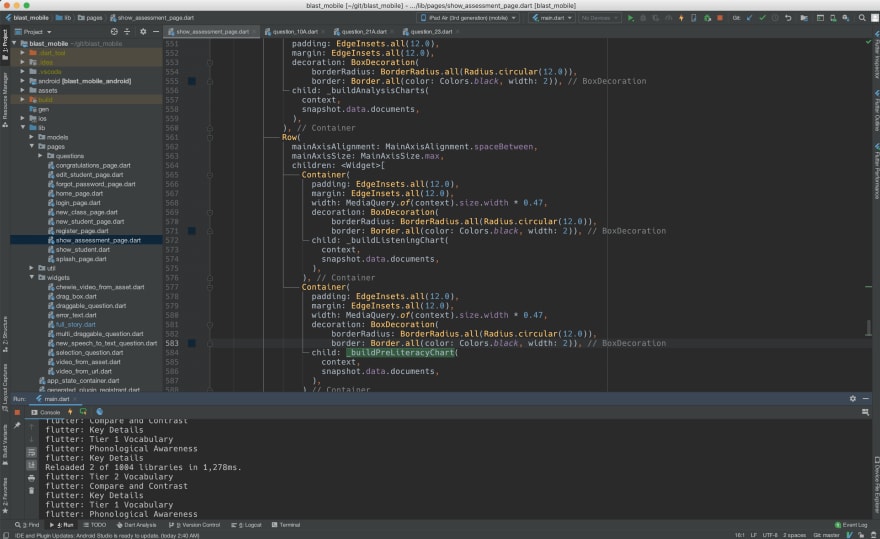 Android Studio was a game changer

All of a sudden, I had everything at my fingertips. Auto completion, Auto formatting, snippets, and documentation lookup was all set By Default. I actually understood the Flutter framework much better because Android Studio made deep framework code easy to debug, inspect, and explore. Not to mention, the Vim integration was fantastic. This was the best of both worlds. I had amazing editing, minimal configuration, and Vim keybindings!

When picking up a new language or framework in Vim, I would spend hours configuring plugins, dealing with linting, and looking up documentation. With and IDE like Android Studio, all of this came pre-built without any configuration.

Android Studio was something of a revelation for me. I began thinking to myself, "If this is so great for Flutter, wouldn't this be great for my other projects?".

Vim to VSCode to Webstorm to IntelliJ

I am now working almost exclusively on IntelliJ IDEA. It is the JetBrains defacto editor that includes plugins for almost anything:

Every project I work on -- like this Gatsby blog in React, my corporate Typescript React job, or my Ruby on Rails side projects -- All work within this one editor.

I had a brief stint with VSCode but, to me, it appeared to have the same flaws I disliked with Vim at the time. It was slow with large files, and it felt sluggish with complicated programs and complicated programming languages (like typescript and tsserver).

I also had a long affair with WebStorm, which was mostly great. I did; however, find it odd to be using an editor ONLY made for a few programs. If I wanted to run a Ruby on Rails app in Webstorm, I was SOL. I thought it was a little silly to run RubyMine, Webstorm, and Pycharm on one machine. If I wrote code in all three languages, shouldn't one editor be able to handle it?

Eventually I wound up running IntelliJ with plugins that handle any programming need I may have. And for now, I am very happy. There are, of course, many cons with IntelliJ. But I truly believe the Pros outweigh the Cons.

I still think Vim is a great editor and I love to break it out every once in a while. But I believe the pros of IntelliJ outweigh the cons of Vim at this point in my career. Here is an overview of my thought process.

Pros and Cons of Vim

When picking up a new language or framework in Vim, I would spend hours configuring plugins, dealing with linting, and looking up documentation.

Pros and Cons of IntelliJ

All of a sudden, I had everything at my fingertips. Auto completion, Auto formatting, snippets, and documentation lookup was all set By Default.

In the end, I have decided that the pros for IntelliJ greatly outweigh the cons. I have been really happy with the platform and look forward to using it in the future.

If you've made it this far, congrats, you're really amazing. I wonder; though, are you feeling the same way I was? I am not sure I'm alone in this thinking or not. I'm sure in 6 months you can find a post about how I switched back to Vim. But for now, I'm really enjoying this experience.

Either way, thanks, signing off for now.

we type code everyday that we don't fully understand !

Chris Power
Father, Husband, Human, lets see... what else...
Remembering that I once was a terrible programmer
#ruby #programming #life #inspiration

Once suspended, cpow will not be able to comment or publish posts until their suspension is removed.

Once unsuspended, cpow will be able to comment and publish posts again.

Once unpublished, all posts by cpow will become hidden and only accessible to themselves.

If cpow is not suspended, they can still re-publish their posts from their dashboard.

Once unpublished, this post will become invisible to the public and only accessible to Chris Power.

Thanks for keeping DEV Community safe. Here is what you can do to flag cpow:

Unflagging cpow will restore default visibility to their posts.