I originally posted this on my blog about a year ago. If it's interesting to you, I post new content on daedtech.com roughly weekly.

It's been a little while since my last reader question post, hasn't it?  Well, let's do something about that today.

Today's subject is office politics.  I'm pretty much always game to talk about this subject, as regular readers know.  Except, rather than dissecting them in-situ, I'll talk about the idea of companies avoid them altogether.

The Reader Question: A Company without Office Politics?

I'll talk about it because the reader question asks about it.

Is it too naive to hope that there is that (perhaps small to improve the odds) company out there where a group of technical people work together to solve problems without all the politics and back stabbing?

Is politics unavoidable? Is it human nature?

I am still hopeful… Part of me thinks when it comes to companies we are still in Feudalism and time will bring about better forms of governance.

There is actually kind of a series of questions in there, and I hope to touch on all of them.  But it really comes down to a matter of defining office politics, for better or for worse, and then seeing if they must exist within a company.

And, if they must, is that okay?  Or must it be an ipso facto problem? 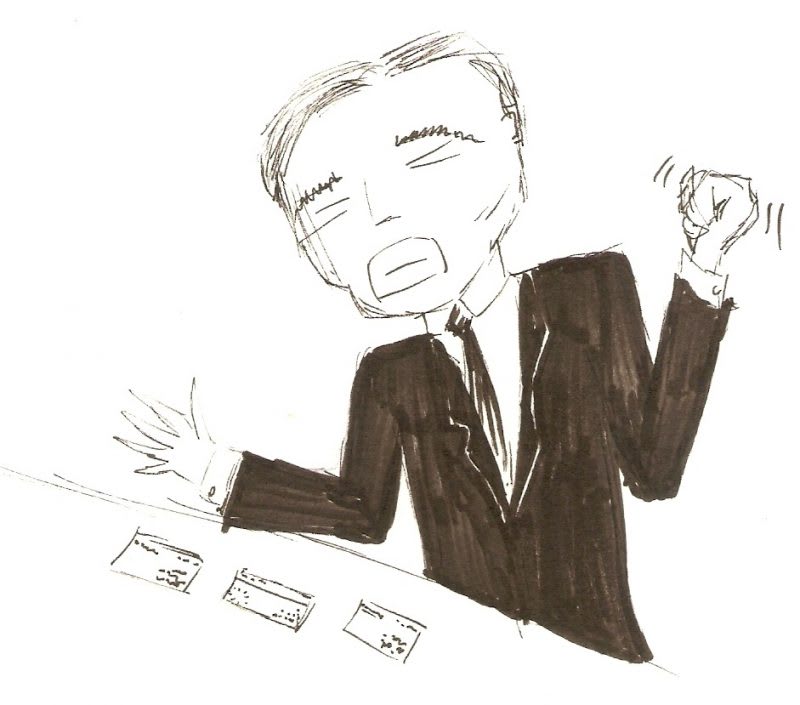 What Is Office Politics?  And What is Politics, for that Matter?

Politics is the process of making decisions that apply to members of a group.

Do you see now why I think it's important to return to this definition?

The word politics carries an amazing amount of baggage in the way of connotations: governmental, interpersonal, etc.  But, at its core, it's about making decisions that affect participants in a group.

The baggage comes from the means and nature of those decisions, as well as how the members receive them.

I've often quipped myself that you have politics anytime you assemble more than 2 people.  And, though I've often meant this to suggest that group size 3 is where complex persuasion begins, it applies to the simple, literal definition here as well.

What, then, is office politics?  Well, let's mark the wikipedia definition up slightly.

Office politics is the process of making decisions that apply to members of a group in an office setting.

The Idea of Avoiding Office Politics is a Non-Starter

Through that lens, you can see that the idea of avoiding office politics is an impossibility.  What you probably mean is ways of avoiding toxic (or even unpleasant) office politics.  I especially believe this to be the case, given the specific mention of "back-stabbing."

Now, I can empathize with the desire to avoid office politics, even in a fairly benign setting.  I tend to do a lot of lone wolf work, and I'm not really big on democratic groups or consensus.

In school, my two preferred approaches to group work, in order, were "don't worry, I'll just do everything," and "okay, you guys do everything."  So I get it. 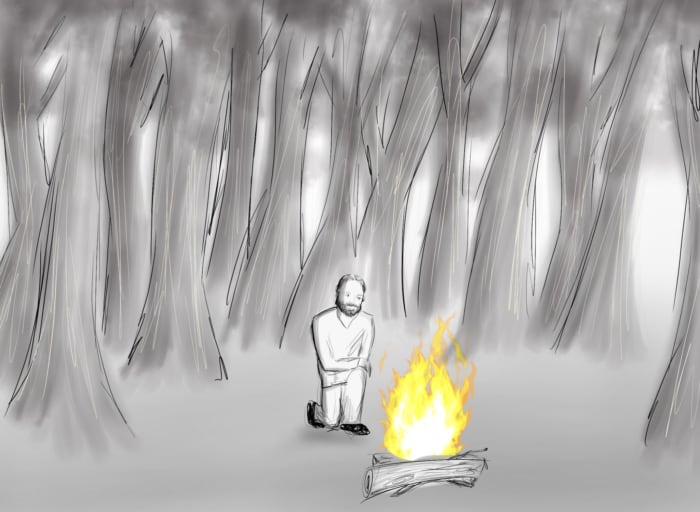 But even for an avowed mercenary and lifestyle designer like myself, at least some collaboration is unavoidable, as are companies.  And so, politics are unavoidable.

But I'll go even further and say that they're neither inscrutable nor as onerous as they may seem on the surface.

So while there are no companies out there without politics, there are companies without toxic politics.  So let's look about how you find those.  And let's do that by looking at heuristics for avoiding bad, stupid, or toxic politics.

First and foremost, let's look at the obvious.  As companies scale, they begin an inevitable process of selling out their initial principles and sacrificing quality and purity.

Everything scales badly, and companies are no exception. The only question is how badly.  Go start your own company, start to grow it, and you'll find yourself living Animal Farm in real time.

So as you dilute, well, everything, by growing, you do the same with decision-making procedures -- your politics.  The larger the organization, the more likely you'll find yourself beholden to weird rules, ineffectual decision-making committees, cynical-system-gaming middle managers, and the like. 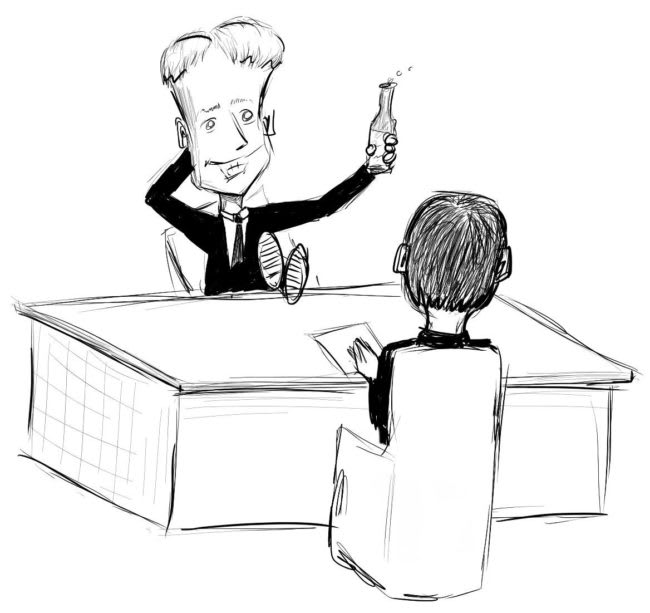 Now lest you think this is me being purely cynical, take heart.  Not all companies scale equally badly.

So large scale isn't always politically awful.  But it's more likely to be.  So if you want to avoid crappy office politics, err on the smaller side, all else being equal.

If decentralization allows a potentially benign means of scaling office politics, the pyramid-shaped org chart has the opposite effect.  I've certainly trashed this structure before on my blog.

The pyramid model was actually reasonably effective for constructing systems of humans, following the Industrial Revolution.  But in modern times, for knowledge work pursuits, it's a total anachronism.

The pyramid shaped corporation is one of command and control, bubbling strategic decisions to the top and issuing edicts on the way down. 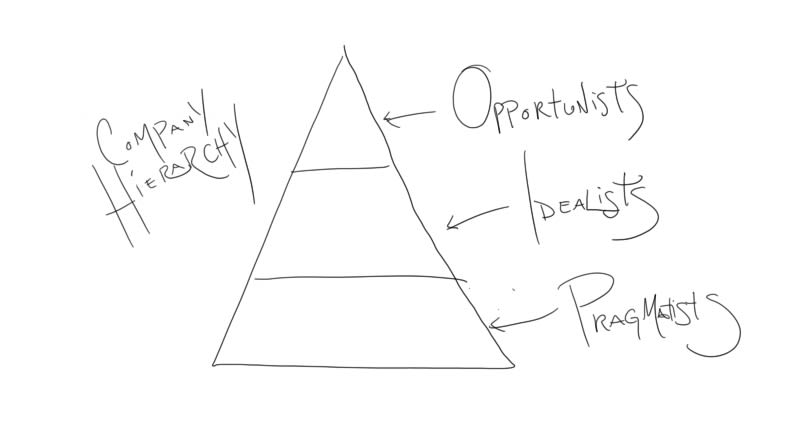 But knowledge work requires something different.  It goes best when the people closest to the work make decisions.

The result of this mismatch is something we've all lived.  The developers use Rational Clear Case instead of git because some VP played golf with the Clear Case sales rep.

These organization structures marry decision-making, status, and power indiscriminately.  This creates the corporate hierarchy as I so often discuss it.

But There Are Plenty of Situations with Healthy Politics

Politics is basically a human decision-making algorithm.  Larger companies are more likely to do this poorly than smaller ones.

Pyramid-shaped companies are more likely to do it poorly than ones with decentralized approaches.  These are helpful heuristics, but not bullet-proof ones.

The maddening fact of the matter is that there's no great way to know how group work goes within an organization, until you involve yourself in it.

To understand that, consider the simplest sort of politics you might have: 3 equal partners in a 3 person firm.  If you're one of those partners, you'll have a wonderful life if business is good and the other partners are your work-soul-mates.  But if they're duplicitous, nasty people, your one-third ownership and autonomous won't save you from nasty politics. 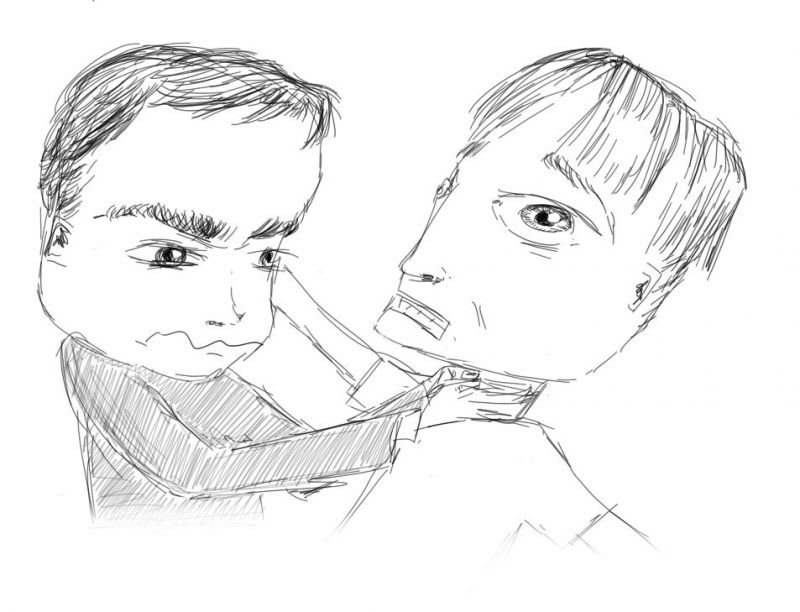 So to look at this from the positive perspective, it means that good office-political situations are everywhere.

They might even exist within your seemingly toxic large, pyramid-shaped organization.  It's just a matter of finding a group with the autonomy to make decisions that matter to it and with a good, healthy internal dynamic as it does so.

That might mean an extensive job search.  But it also might be as simple as a random internal transfer to a team down the hall.

These situations might be ephemeral at times, but they're imminently accessible.

The Broader System Still Needs a Lot of Improvement

So, yes, you can find situations that a lot of people would think of as "office-apolotical," though I would call them situations with healthy politics.  And you can find them everywhere.

But what you can't typically do is advance very far in situations.

And the reason for this is that sufficiently large corporations and pyramid-shaped corporations will inevitably be dominated by a combination of reluctant positive-sum game opportunists and relatively ruthless zero-sum opportunists. 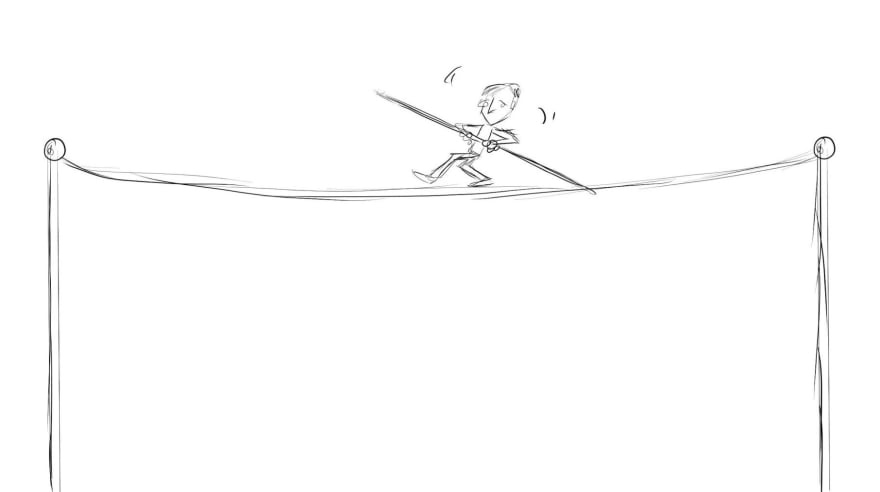 These players intuitively find ways to drive decision-making that the rest of the folks in the company don't even perceive.  They manufacture as sort of decision-making dark matter that invisibly throws the organization's gravity out of whack.

To advance, you need to develop the ability to see and even create this dark matter.

So if don't want to do that, you don't have much choice.  You can find peaceful corners of the universe and try to avoid errant space disasters.  Or, you can leave and participate in the creation of systems whose politics you control.

I suggest various ways of doing this, either starting your own little firms or practices.  That's one possible avenue.

Other companies occasionally chip away at this as well, doing things like the Zappos-es and Steams of the world attempt.  So if you're up for it, throw your weight into the mix and work with those of us at least trying a little to drag things out of the corporate middle ages.

A Reflection Guide on Determining When it’s Time to Quit

Do you know the ABCDs of FinTech?