One of the most useful features in recent years was the addition of block scoping to the ECMAScript 2015 Language specification (a.k.a. ES6), and with it came new tools for working with the new type of scope.

In this post, we'll dive into the behavior of one of these new block-scope tools: const.

Block scoping in JavaScript is wonderful. It gives us the ability to create scopes on-demand by "slicing up" a function into as many encapsulated bits of scope as we deem necessary, without the need for more functions.

But it would be rather useless without the ability to declare variables which exist only within these 'blocks' of scope.

...creates a new immutable binding for the name N that is uninitialized. A binding must not already exist in this Environment Record for N....

It is a Syntax Error if Initializer is not present and IsConstantDeclaration of the LexicalDeclaration containing this LexicalBinding is true.

Let defaultValue be the result of evaluating Initializer.

const binds a name to a value and doesn't let me bind it to anything else.

At run-time, my variable is initialized and references to it can then be evaluated and manipulated. 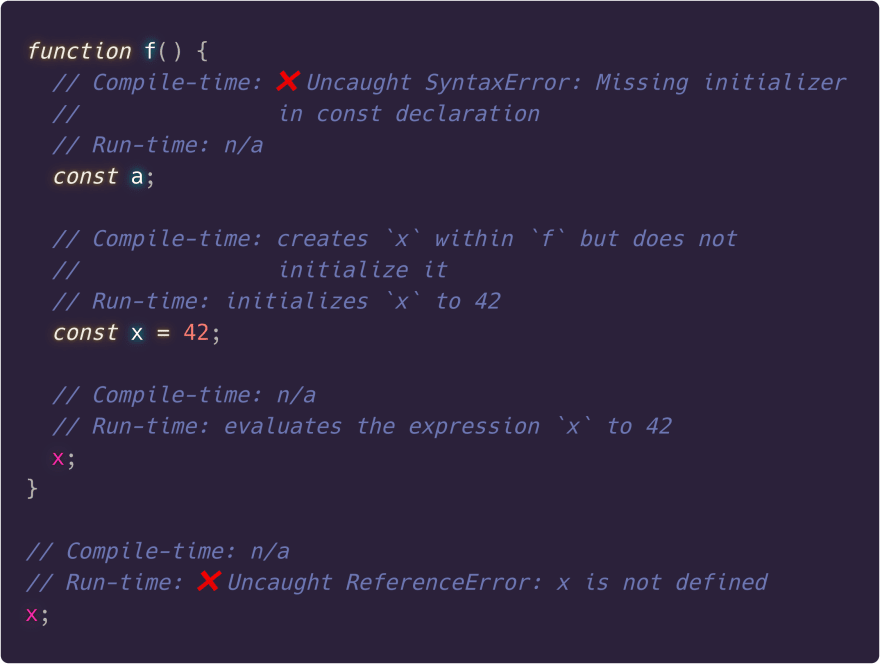 A run-time reference to a variable declared with const is not valid unless it occurs after the variable declaration, with respect to the current flow of execution, not necessarily the "physical" location of the declaration in my code. For example, this is valid: 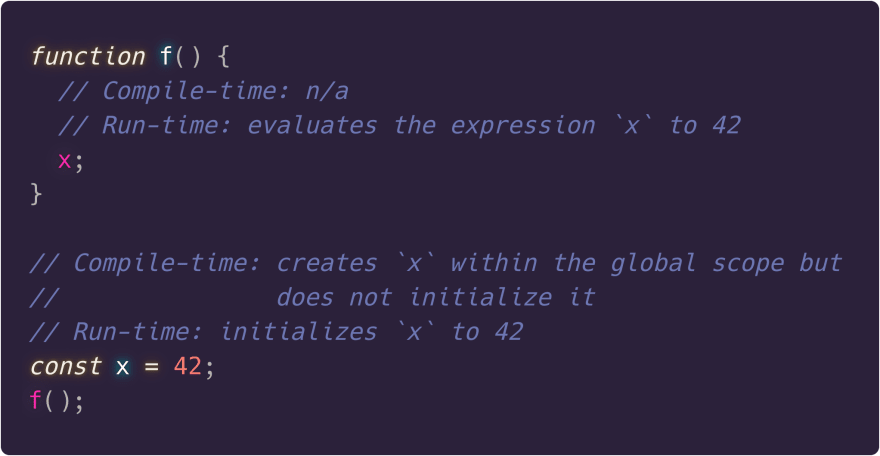 But this will give me a run-time error:

Furthermore, additional declarations of the same name in the same scope using const or let are not allowed: the name is essentially reserved by the first declaration encountered by the compiler. 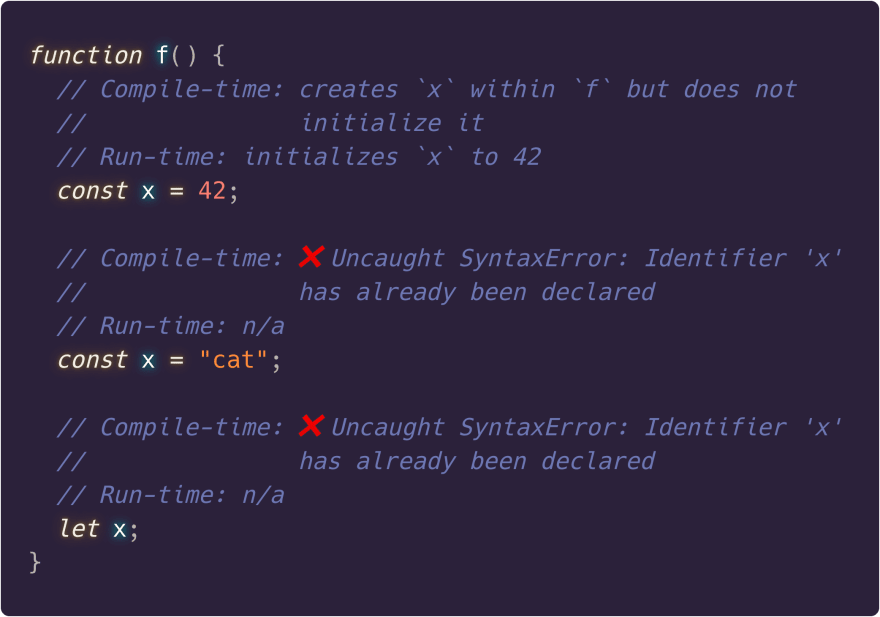 const, like var and let, gives the ability to encapsulate, manipulate, share, and hide data in boxes within my JavaScript.

But unlike var, const restricts access to my box to the to the nearest enclosing lexical environment, not merely the closest function, and so const really shines at close-quarters data management.

In JavaScript, functions have lexical environments, but so do blocks, and this ability to reduce the scope of a variable and hide my data even from the nearest enclosing function is where the strength of const lies.

With const, unlike let and var, my box is initialized with a value and can never be re-assigned, making it a great tool to employ in an immutable approach to state management. The string "const" in English is highly associated with the word constant, and so const in JavaScript helps communicate to my reader that neither the meaning of this variable nor its value will ever change. 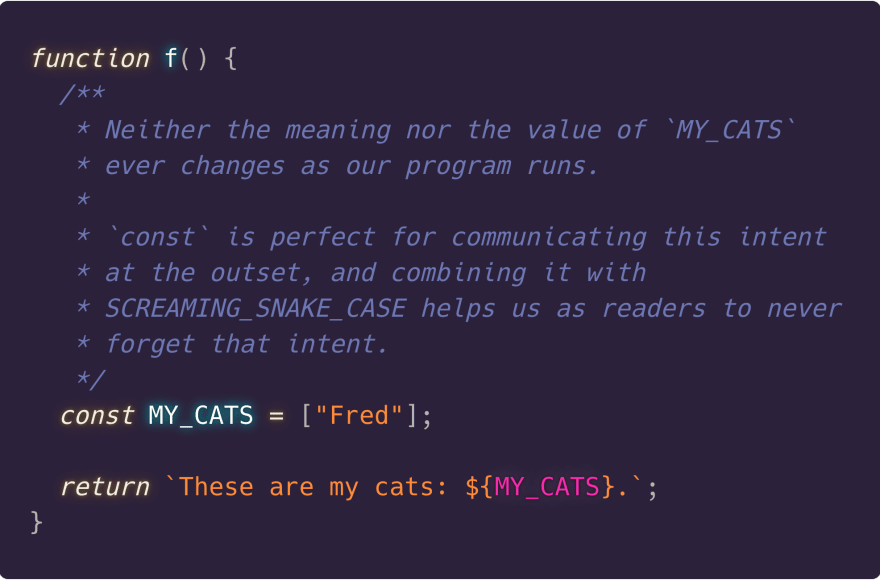 And since functions inherit the environment of their parents thanks to closure, a function nested within such a block can access the const (and var and let) bindings of their parent scopes, but not vice-versa. 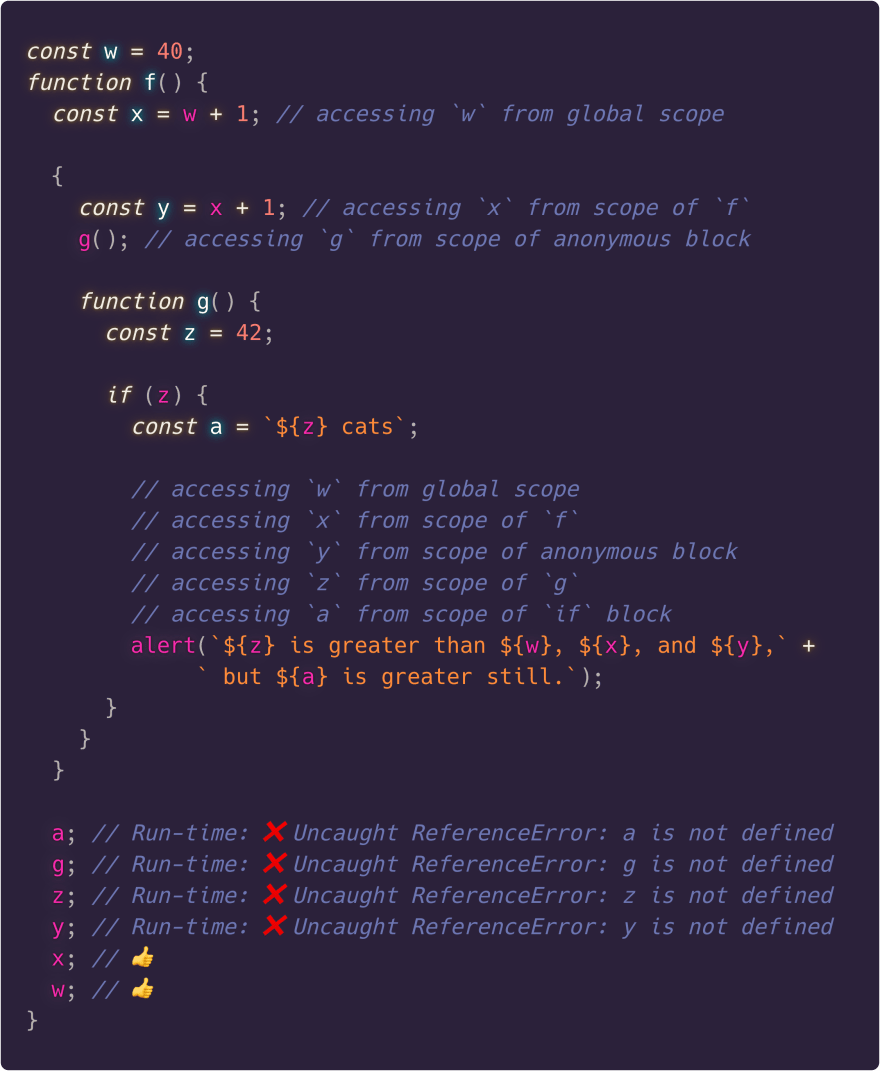 Sometimes, I want a box that will hold different things as my program executes, like as a counter or a flag. const forbids re-assignments, and so it will not work for this use case. I must use var or let instead.

Sometimes, I need to manage state that is accessible across an entire function of decent size, not just a short block of code. Since const scopes my data to the nearest lexical environment, it will work for this purpose, but it communicates the wrong thing to my readers and so it's not the best tool for this job. In this situation, var is better. 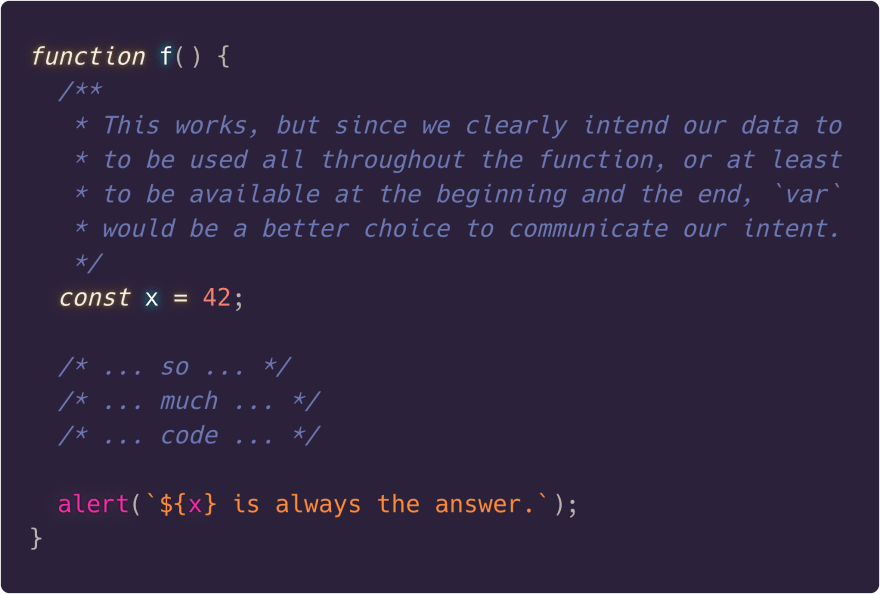 Sometimes, I want a name that always means exactly one thing, but whose bound value may evolve throughout my program. Since const prevents re-assignments but doesn't care about changes to inherently mutable values, it will work for this purpose, but it communicates the wrong thing to my readers.

Something that changes is not constant, and the strong association of const to the word constant makes it misleading in this context. For this situation, I prefer employing var or let in combination with SCREAMING_SNAKE_CASE to communicate to readers that I intend the meaning to remain constant, but the exact value may vary. 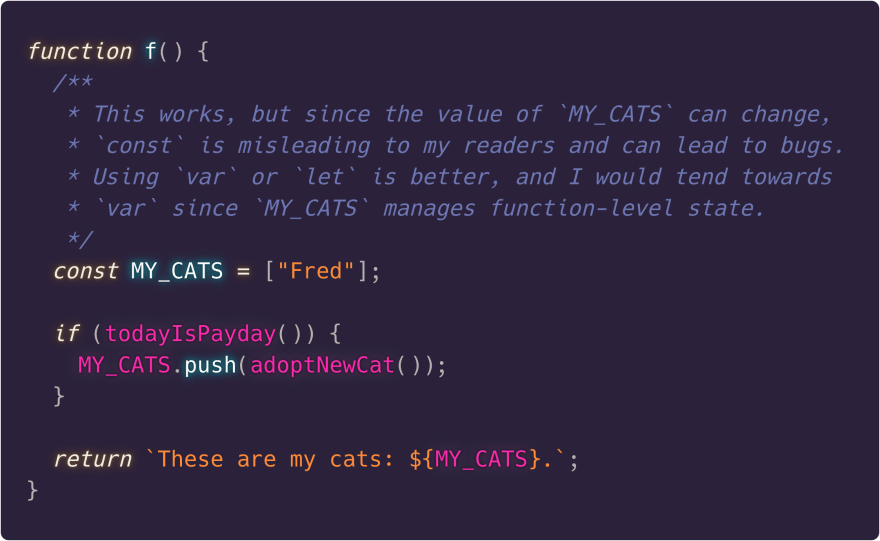 Using const inappropriately can hurt the readability and maintainability of my code because I'm communicating the wrong thing and not encapsulating my data as well as I could be.

Sometimes, I want to give a name that never changes meaning, to a value that never changes. No single construct in JavaScript can enforce this. The best I can do is communicate my intent clearly and leverage the tools available on a case-by-case basis.

In these situations I prefer using const in combination with SCREAMING_SNAKE_CASE for communicating, "This is a constant, and will never change in meaning or value over the course of this block." I find the association with the word constant overpowers everything else about const, and so I don't tend to use it for any other purpose.

The block could be something like an if statement, for loop, or even an anonymous block; one of the main values of const is in keeping variables close to where they are used without exposing them to the wider world of the enclosing function.

If a function definition is particularly short, say only two or three lines long, and my other criteria hold true, I may prefer to use a const, but the value of such a short-lived const is highly context-specific. In this case the value of const over var and let is entirely in what it communicates to my readers: this variable is short-lived and it never changes, you can forget about it soon and be at peace 😌.

Daniel Brady
If you're downgrading society, you're not providing a service.
Have you ever tried implementing a language spec?
#discuss #language #design #thinkdeep
syndicate: Prototype, Requirements and Design
#showdev #python #thinkdeep #development
syndicate: Why I Made It
#showdev #blog #thinkdeep #motivation

Once suspended, daniel13rady will not be able to comment or publish posts until their suspension is removed.

Once unsuspended, daniel13rady will be able to comment and publish posts again.

Once unpublished, all posts by daniel13rady will become hidden and only accessible to themselves.

If daniel13rady is not suspended, they can still re-publish their posts from their dashboard.

Once unpublished, this post will become invisible to the public and only accessible to Daniel Brady.

Thanks for keeping DEV Community 👩‍💻👨‍💻 safe. Here is what you can do to flag daniel13rady:

Unflagging daniel13rady will restore default visibility to their posts.