Ruby on Rails appeared in 2004 and since then has evolved with rises and falls. The framework was highly popular at the beginning of the 2000s and has become a building material of great well-renowned apps such as Twitter, Github, Airbnb, Kickstarter. At that time numerous companies started offering RoR development services, and the number of players on the market is increasing.

However, now Ruby on Rails is not as popular as it used to be. For a few years, the popularity of RoR continues decreasing. This fact causes numerous discussions in the expert circles about the framework’s perspectives. 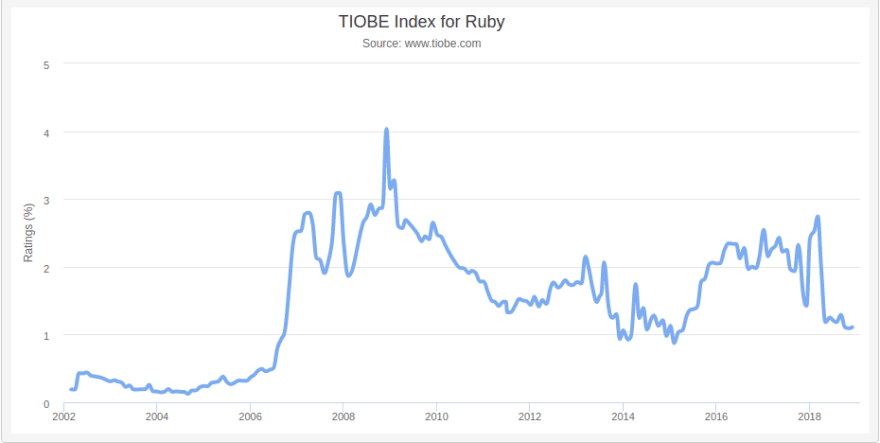 Is Ruby on Rails dying?

Let’s go back to the RoR’s history. David Heinemeier Hansson (DHH) created the framework in 2003 for the 37signals (now Basecamp). Ruby on Rails proved itself as an effective tool for building startups. A year later DHH presented RoR as an independent framework aimed to make developers’ work faster and more productive.  Particularly, it was a reaction to the fast-growing startup market. Many of the startups built on RoR succeded: GitHub, Couchsurfing, Airbnb, Bloomberg, Shopify, etc. Did RoR succeed as well?

They say Rails’ golden time is in the past. Hence, there are doubts whether RoR has any perspectives for the future. The main point of skepticism is RoR’s scalability. This skepticism is reinforced by the accident with Twitter, who abandoned  RoR in 2011 and moved some of its components to Scala. The front-end remained on Ruby on Rails, and the back-end was replaced. It happened because Twitter started growing fast and needed to ensure smooth work.

Because of the case, many people reproached the founder of RoR David Heinemeier Hansson in the poor framework’s scalability. Heinemeier commented on the situation in a video appeal. He said that if Twitter had issues with scalability, it did not mean that all RoR products would face the problem. There are many ways to scale the RoR apps.

The scaling rumors have not influenced many tech giants who used Rails. In many cases, RoR is not the only technology they use. However, some of the companies are really loyal to the framework. For example, Airbnb and Shopify are great supporters of RoR and organize meetups for the framework’s developers. They help to build and strengthen the RoR’s community.

Ruby on Rails has a huge community, which keeps growing. There are almost 3,500 RoR contributors on GitHub. They are working on making the technology faster, cleaner, and more secure. Also, the contributors are working on fixing Ruby’s weaknesses such as slow performance. The framework gets updated at least a few times a year. Also, a very important factor for the developer is access to the learning resources and documentation. Ruby on Rails Maintenance contains all the available materials for the needs of the beginner and more active developers.

The demand for RoR

The discussions over RoR’s dying are still going on. Developers are afraid of being left out of the boat at the job market. The beginners are thinking which language to choose and the experienced developers consider switching to the languages in demand. So is Ruby on Rails still in demand?

Products built with Ruby on Rails

Many of the RoR famous projects were created 10 to 5 years ago, such as GitHub, Dribbble, Twitter, Hulu, Goodreads. Today RoR can be used for building products of various kinds: social apps, marketplaces, media, entertainment, educational, service apps, you name it. The range is wide.  The trendy fitness apps such as MyFitnessPal, MD Life and Mindful Meal were created with RoR. It means that contemporary startup developers are still interested in the technology.

You may wonder how many websites use RoR. The answer is 350,000. This is almost three times more compared to Python (125,003) and Java (103,009). It is also 3% of the general market, which is difficult to call a “dying” tendency. Though RoR has lost two positions in the TIOBE index for the last year. TIOBE index defines winners by the biggest number of online search requests. Also, RoR holds on the 8th position the third year in a row in the Red Monk’s chart, which is focused on the developer’s industry trends.

Having famous products in its portfolio aren't all for predicting the happy future of RoR.

Ruby on Rails popularity among developers

A part of technology success is its popularity among developers. For some of the employees, higher salaries might become a reason to start learning certain languages and frameworks.

According to the Stack Overflow report in 2018, RoR is still popular among developers and takes place in the number of the ten most used technologies. On the average, RoR’s specialists get $90,000 per year (the sum varies from $78,000 to $120,000 depending on a company and experience), according to the Glassdoor report. To compare, Javascript developers’ annual income is $17,000 less.

Ruby on Rails is a framework that has been evoking many discussions about its further development. Though it has faced a decrease in popularity, companies continue to develop their products with this technology. Also, the framework has a strong community, available resources, and does not let other technologies outplace it too far in rates. It is not by far the RoR’s death.

Once suspended, daniel16810116 will not be able to comment or publish posts until their suspension is removed.

Once unsuspended, daniel16810116 will be able to comment and publish posts again.

Once unpublished, all posts by daniel16810116 will become hidden and only accessible to themselves.

If daniel16810116 is not suspended, they can still re-publish their posts from their dashboard.

Once unpublished, this post will become invisible to the public and only accessible to Daniel.

Unflagging daniel16810116 will restore default visibility to their posts.