I'm happy to introduce Piccolo, an async query builder and ORM for Python, which works with Postgres and SQLite.

Some of it's standout features:

Asyncio makes a lot of sense when you want high throughput applications. Piccolo is built on top of asyncio and a fast database adapter called asyncpg. You can also use Piccolo within a traditional synchronous app too.

Most users of Django will tell you that the admin interface is one of its greatest strengths. It saves developers lots of time, compared to building one from scratch for each project. Piccolo has its own admin, which is clean and modern, built using Vue JS. 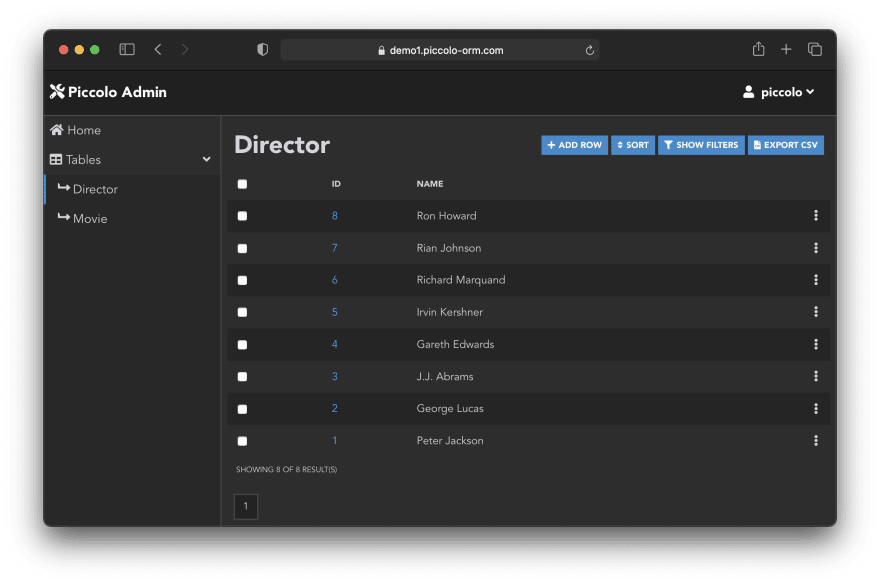 There are thousands of web frameworks out there, but often they just focus on the view layer, and don't think about the database or security.

Piccolo was designed the other way around - focusing on the data layer first, meaning you can use it with any routing library you wish. Piccolo has out of the box support for Starlette and FastAPI. Other ASGI frameworks integrate with Piccolo really easily.

No ORM is complete without migrations - Piccolo ships with them right out of the box.

Piccolo makes creating a new web app really simple. Just use piccolo asgi new, and a web app template is created for you automatically. Starlette and FastAPI are currently supported.

Piccolo makes learning the query syntax as easy as possible, using a playground. Use piccolo playground run, and it'll launch an iPython shell, and a test SQLite database, allowing you to practice querying with Piccolo without having to set anything up first.

Piccolo's syntax for queries is as close as possible to SQL. Anyone with SQL experience should find it very natural to use.

Piccolo allows you to separate your models into apps, making your code more maintainable, and meaning you can share them with other people on Github, or PyPI.

Piccolo has a bunch of associated middleware, endpoints, and tables to help build a secure web app.

Give Piccolo a go. It is already being used in production, and is improving at a rapid pace. If you have any feedback or questions, let us know on Github. Thanks!

Once suspended, dantownsend will not be able to comment or publish posts until their suspension is removed.

Once unsuspended, dantownsend will be able to comment and publish posts again.

Once unpublished, all posts by dantownsend will become hidden and only accessible to themselves.

If dantownsend is not suspended, they can still re-publish their posts from their dashboard.

Once unpublished, this post will become invisible to the public and only accessible to Daniel Townsend.

Thanks for keeping DEV Community 👩‍💻👨‍💻 safe. Here is what you can do to flag dantownsend:

Unflagging dantownsend will restore default visibility to their posts.