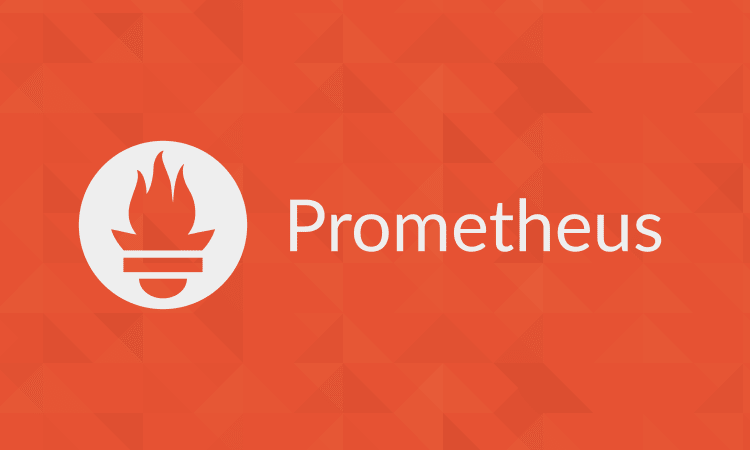 What is High Scale Application Monitoring?

So, It is important to have a centralized view of a Sys to Pinpoint a source or problem.

Typically you have, let's say multiple servers running containers on them. As the user input grows, it makes sense to distribute these services individually, getting us to a microservice infrastructure. Now, if services want to connect with each other, there should be some sort of a way for them to be interconnected.

Why Not Debug Our Code? Why Monitoring?

Let's say you have completed your thousand dollar Project after a day and night hard work, and another day when you woke up you have
seen that your application stopped working, some of the build components of your application or microservices got failed/stopped running and these errors are too much that you are not able to find which component or services are failing or caused the failure. Or let's say your application is responding very slowly as all the traffic is being directed to just limited servers. That is a place no one would want to be in. As debugging this manually is going to be very time-consuming, So at this place, monitoring and alerts are places an important role. 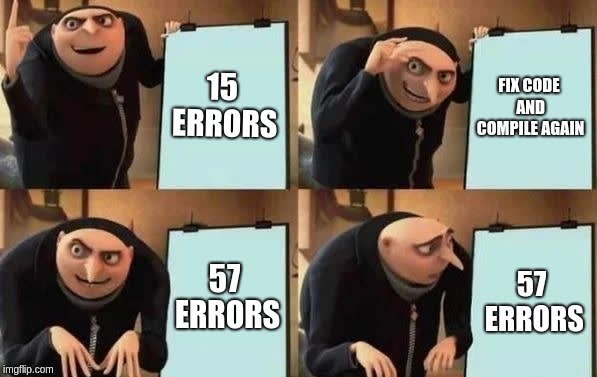 What is the Solution?

So how do you ensure that your application is being maintained properly, and is running with no downtime? We need some sort of an automated tool that constantly monitors our application and alerts us when something goes wrong (or right depending on the use case). Now, in our previous example, we would be notified when a service causes failure, and hence we can prevent our application from going down.

Prometheus is a free software application used for event monitoring and alerting. It records real-time metrics in a time series database (allowing for high dimensionality) built using an HTTP pull model, with flexible queries and real-time alerting. Prometheus is built by SoundCloud and currently, it is a F/OSS incubated project under Cloud Native Cloud Foundation(CNCF). 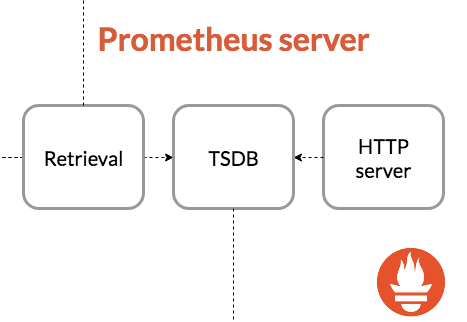 In the above, we see some important components of Prometheus Server. It consists of three parts: 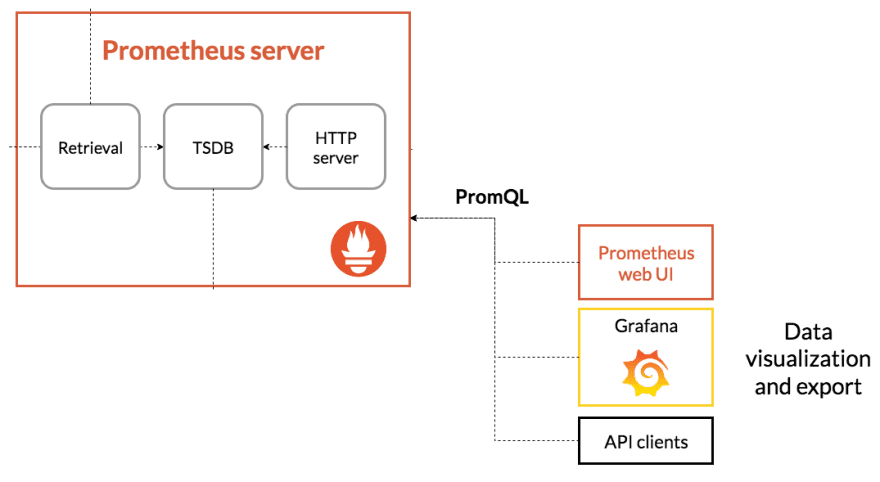 The metrics are defined with two types of major attributes TYPE and HELP to increase logs readability.

How does it Pull the data from Targets?

The Data Retrieval Worker pulls the data from the HTTP endpoints of the targets on path /metrics. Here we notice 2 things:

Q. How do we make sure that the target services expose /metric & that data is in correct format?
A. Some of them expose the endpoint by default. Ones that do not, need a component to do so. This component is known as an Exporter. An Exporter does the following:

1.Fetch data from the target

2.Convert data into a format that Prometheus understands

3.Expose the /metrics endpoint (This can now be retrieved by the Data Retrieval Worker) For different types of services, like APIs, Databases, Storage, HTTP, etc, Prometheus has a Exporters you can use.

How you can Monitor your own Application?

Let's say you have written your application in python and you want to expose it to the HTTP endpoint /metric on your application instance so you need some client libraries or you can say an exporter which then can be used to send data to the data retrieval worker. In the official documentation of Prometheus Clients, you can get the list of all clients.

Metrics are one of the “go-to” standards for any monitoring system of which there are a variety of different types. At its core, a metric is essentially a measurement of a property of a portion of an application or system. Metrics make an observation by keeping track of the state of an object. These observations are some value or a series of related values combined with a timestamp that describes the observations, the output of which is commonly called time-series data.

Prometheus is a pull-based system that pulls data from configured sources at regular intervals.

As mentioned above, Prometheus uses a pull mechanism to get data from targets. But mostly, other monitoring systems use a push mechanism. How is this different and what makes Prometheus so special?

Q. What do you mean by push mechanism?
A. Instead of the server of the monitoring tool making requests to get the data, the servers of the application push the data to a database instead.

Q. Why is Prometheus better?
A. You can just get the data from the endpoint of the target, by multiple Prometheus instances. Also note that this way Prometheus can also monitor whether an application is responsive or not, rather than waiting for the target to push data.
(Check out the official comparison documentation)

NOTE: But what happens if the targets don't give us enough time to make a pull request? For this, Prometheus uses Pushgateway. Using this, these services can now push their data to the Data Retrieval Worker instead of it pulling data like it usually does. Using this, you get the best out of both ways! 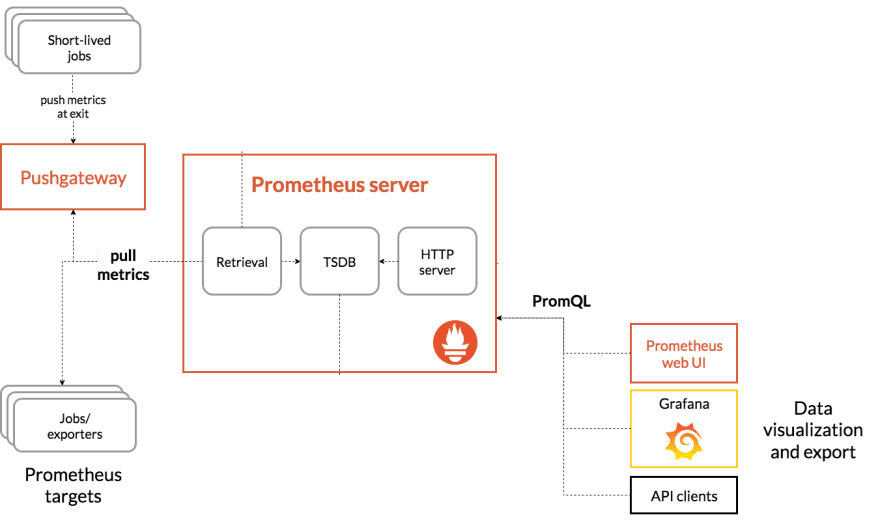 How to Use Prometheus?

Till now we have got to know What is Prometheus? and How the Prometheus Architecture? look like, Now let's see How we can set up Prometheus Locally?

Q. When you define what targets you want to collect data from in the file, how does Prometheus find these targets
A. Using the Service Discovery. It also discovers services automatically based on the application running. 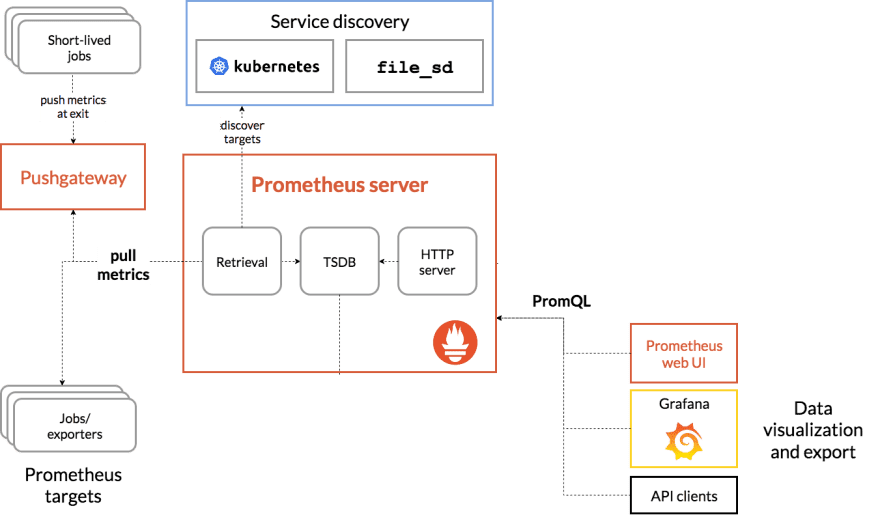 The most important file in Prometheus is the config(yml) file, which is Prometheus.yml here we define all set of instruction that should build the Prometheus Server:

(Check the official documentation for configuration)

Prometheus has an AlertManager that is used to set Alerts and send them using Emails, webhooks, Slack, and other methods. As mentioned above, the Prometheus server uses the Alerting Rules to send alerts.

Where is the data stored?

The data collected by the Data Retrieval Worker is stored in a TSDB and queried using PromQL query language. You can use a Web UI to request data from the Prometheus server via PromQL. 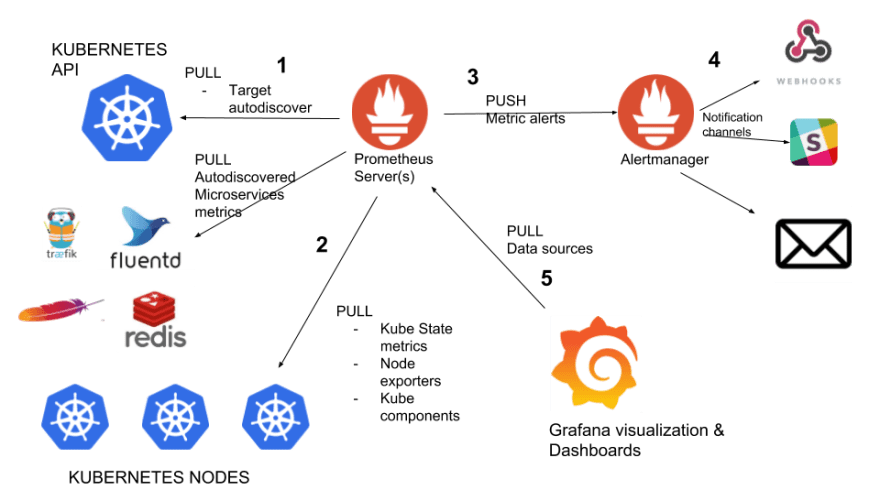 For the demonstration purposes we will use Docker to make things really easy and reproducible anywhere. Here is a simple Dockerfile which sets up the stage for us.

Now, we will create a simple docker-compose file to prepare our docker image to run, only thing it does is, it gives us a handy name to work with which will expose multiple ports to the host for us. With this, we can access them from the host machine. I generally prefer docker-compose a lot than writing long docker run commands with options.

Once these two files are there, you can go to the folder containing them and run the service from docker-compose in interactive mode. Note that --service-ports is a very important option, it allows us to do the port binding right (which is disabled by default).

Once you run the command, you will see a bunch of outputs corresponding to the build steps in Dockerfile.

After all the steps are done you will be thrown into an interactive shell inside a docker container. If you want to check the no of the running container with a prometheus_demo image name you can use docker-compose ps or docker ps -a you will get the single container running multiple services like Grafana, Prometheus, node_exporter, and alert manager on a default port or ports mentioned in Dockerfile.

Now let's extract all the Packages which we have downloaded using Dockerfile.

The next step is to move to the package directory. I am showing with Prometheus you can follow these steps with other packages also.

Now you can run the Prometheus file and make your Prometheus Monitoring System running.

Now you can see a msg in the logs that Server is Up and ready to receive web request.

Your Server is running it on localhost:9090, you'll get the following Prometheus UI Dashboard that you can now configure: 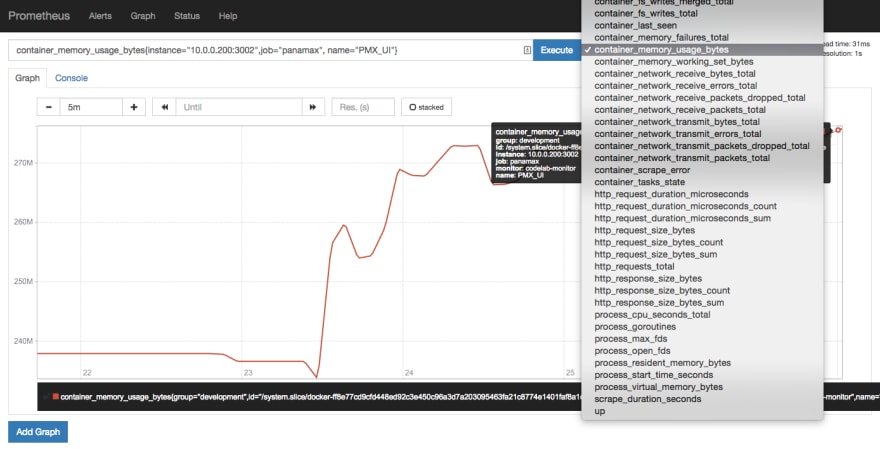 In the above Prometheus UI Dashboard we're monitoring the Docker Containers.

You can set up Grafana by following the below steps

You will find your Grafana Server Running at localhost:3000

Now you can fetch the metrics and see the beautiful visualization in Gafana Dashboard. 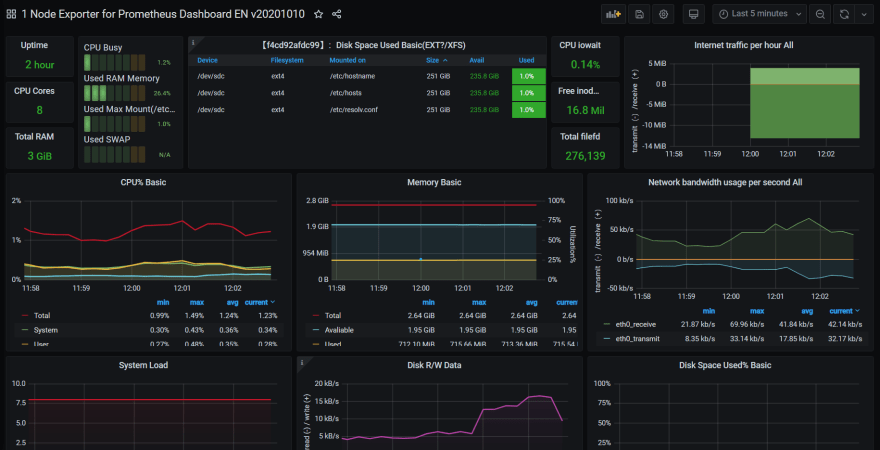 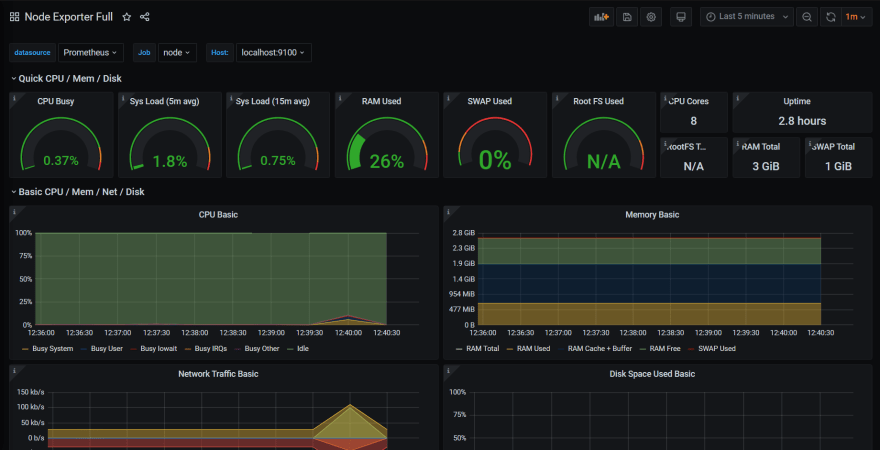 In the next blog, we will Discuss more Prometheus Advanced Visualization with Grafana and also monitors K8's using Prometheus!

🚩 LinkedIn
🚩 Shoot me a Mail

Is the open-source community ready for protestware ?