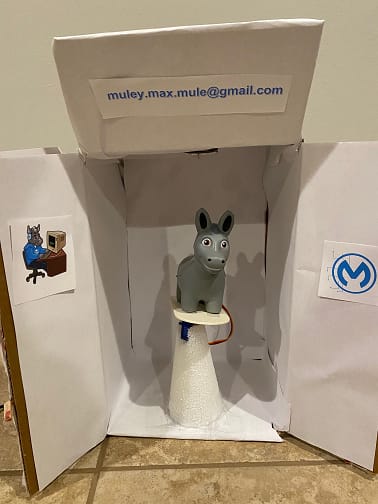 I have just started learning how to use MuleSoft at work, where we will be using it for integration between our various systems. I completed the Anypoint Platform Development: Fundamentals (Mule 4) self-paced training and then started on this project to help get some hands-on-experience.
So, disclaimer: I don't really know what I'm doing, so don't rely on this for anything :)

After attending a MuleSoft user group event, the organizer sent me a little Max the Mule squishy. My colleagues and I renamed him to Muley, and during our project planning, whenever we noted a potential use for MuleSoft Anypoint, I'd make Muley do a little dance. I found myself doing this a lot, and wondered "could I automate this?"

A few years ago I started tinkering with Arduino and other hobby electronics boards. I haven't touched any of that for a couple of years, but I went out to the garage and found my old box of goodies. In there was an unopened Particle Photon WiFi Development Board. This allows you to build a little device and then expose functions over HTTP.

Using the documentation, I was able to figure out how to call the Particle API to trigger my functions using Postman. The screenshot below shows how I just had to POST to the function name and include my device's unique ID and an access token (both from my Particle account):

That call resulted in Muley doing a little dance (and was a very exciting moment for me :))

My next step was to use Anypoint to design and implement a System API to make calls to my cloud functions.

I used the Anypoint Platform API Designer to build up my RAML API specification.

While designing the System API, I quickly noticed that both of the cloud functions had the same request and response types, so I created API Fragments for these to allow me to reuse them. I also had a ton of fun working on this project, so I am very likely to want to use these data types again in future tinkerings! 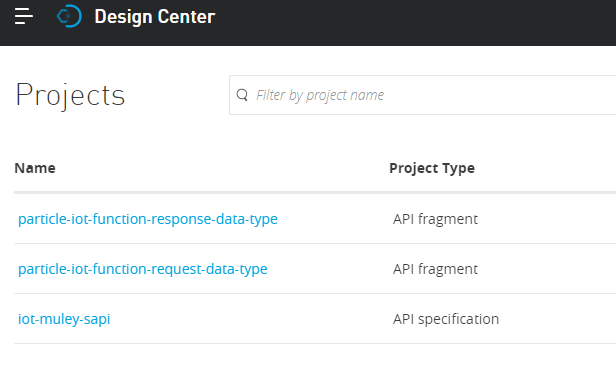 The screenshot below shows how I was able to reference the reusable API Fragments that I published to my own Exchange: 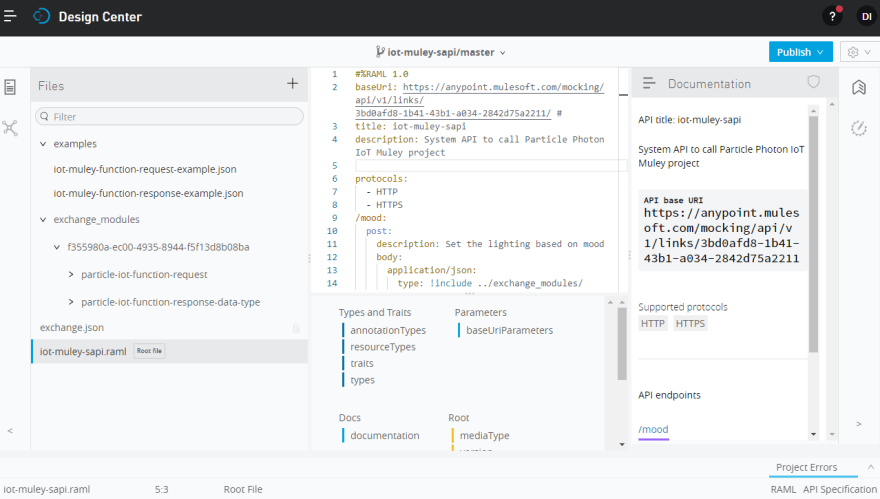 In Anypoint Studio I pulled in my System API RAML from Exchange. It kindly scaffolded it all out for me and I went to work implementing my flows to make HTTP POST requests over to the Particle REST API.
I included a config.yaml file and used the Configuration Properties to connect to this:

This allowed me to access these configuration properties within my implementation flows: 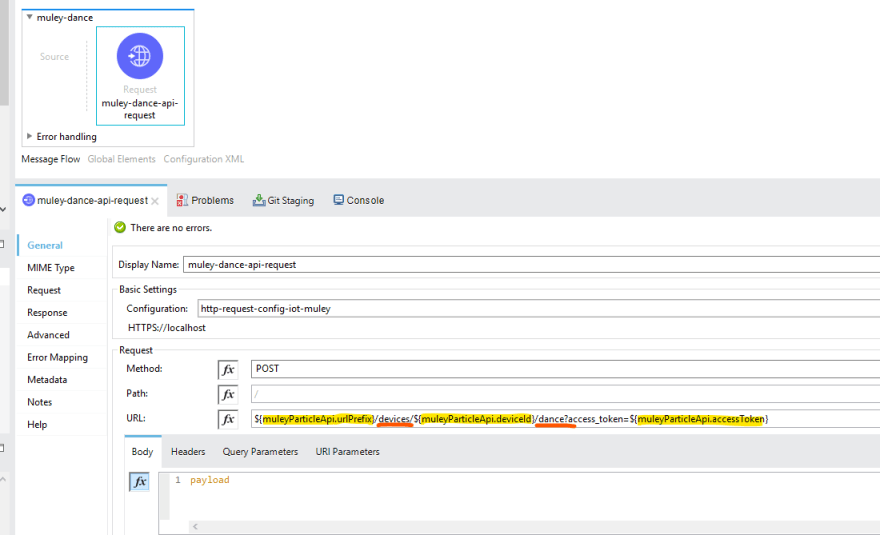 Since I created the particle API request and response types, I didn't need to do any additional DataWeave mapping before making the http request.

So now I had a Muley IoT System API to handle communications to my IoT device.
Next I needed to create a Flow that handled some trigger and made calls the System API.
I decided to use an email as the trigger. This would allow me to send emails to muley.max.mule@gmail.com and have Muley dance.

I was able to pull in the Muley IoT System API from Exchange and get the generated connectors (which was pretty cool!)

Because I wanted to use this experience to learn, I decided to add another integration in at this point. I wanted to make Muley react to the content of the email. For this I found the Monkey Learn Sentiment Analysis API. I setup a developer account which gave me an authorization token and a model Id. I used these in an HTTP Request connector to pass through the body of the email message and get back a sentiment (of "Positive", "Negative", "Neutral" - along with a bunch of other stuff like the certainty rating).

So my flow needed to do something like this:

Here is how the flow looks: 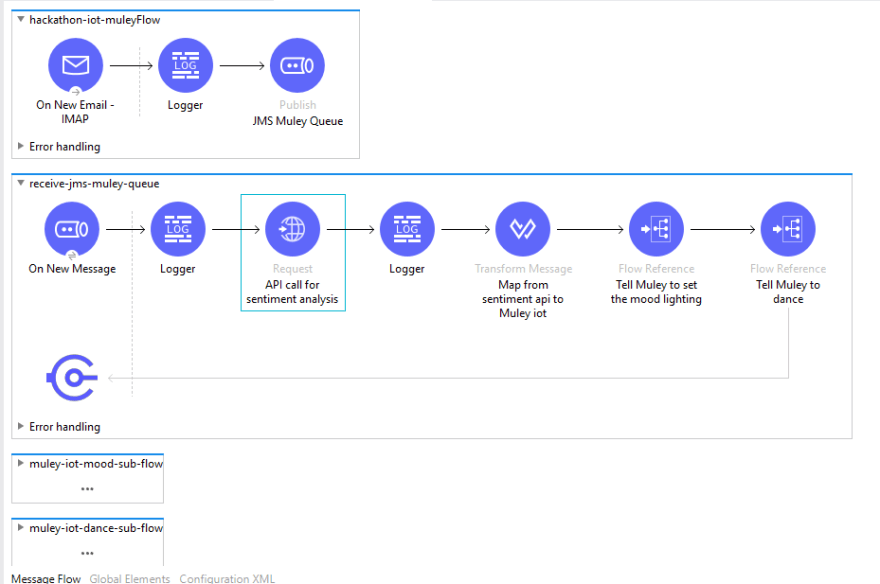 As you can see, I went a bit extra and made use of the JMS Queue connector. When a new email arrives, I simply published to a JMS queue. I then made the rest of my integration flow trigger on a new message to the queue. I really did this just to practice using JMS queues, but it also sets me up to make "other things" happen when Muley gets an email, without having to keep updating this flow.

Here is how I mapped from the email message payload into the request expected by the sentiment analysis API: 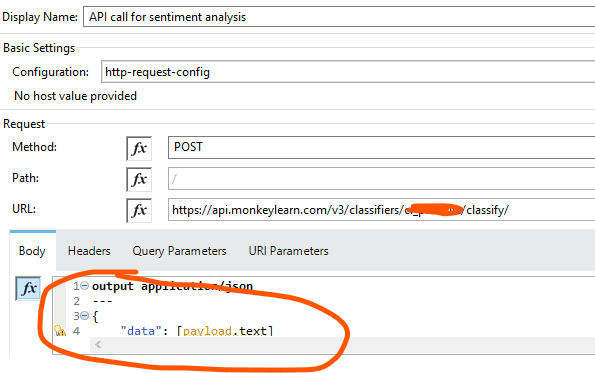 And another example of Dataweave, this time mapping from the sentiment analysis response into request format for our System API:

Here is the end result of this Hackathon project. If we send a positive email to Muley, then the lights flash green while he dances:

But if we send a negative email then the lights flash red:

The IoT Particle source code and Anypoint .jar files are available on GitHub:

The many names of the Internet of Things (IoT)

Easiest Way to Add Cellular to the Raspberry Pi Zero 2

The Convergence of IoT, Automation and Artificial Intelligence

Darren Ingram
Music Monday — What are you listening to? (May 23)
#watercooler #discuss #music
Describe the best teacher you've ever had
#discuss #watercooler
[DISCUSSION] What is your perfect work environment ?
#os #webdev #programming #productivity