Before we start implementing any component, let’s lay out an architecture or a block diagram which we will try to build throughout this series one-by-one. As our intention is getting to learn more technologies using one use case, this fits just right. 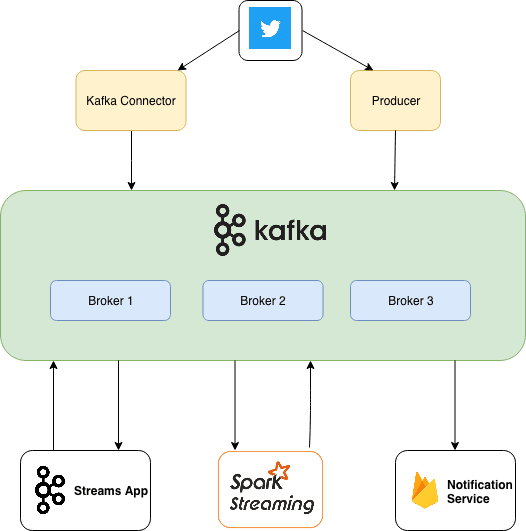 This diagram covers all points I laid out in The Plan. We already finished setting up a Kafka Cluster in Part 1.

In this article, we’ll focus on building a Producer which will fetch latest tweets on #bigdata and push them to our cluster.

What is a Producer?

Everyone may want to use Kafka for different purposes. Some might want to use it as a queue, some as a message bus, while some as a data storage platform. Whatever might be the case, you will always use Kafka by writing a producer that writes data to Kafka, a consumer that reads data from Kafka, or an application that serves both roles.

Kafka has built-in client APIs that developers can use when developing applications that interact with Kafka. In this article we’ll use Producer API to create a client which will fetch tweets from Twitter and send them to Kafka.

A Note from Kafka: The Definitive Guide:

In addition to the built-in clients, Kafka has a binary wire protocol which you can implement in programming language of your choice. This means that it is possible for applications to read messages from Kafka or write messages to Kafka simply by sending the correct byte sequences to Kafka’s network port. Such clients are not part of Apache Kafka project, but a list of non-Java clients is maintained in the project wiki.

Following are the features of the Java Producer API that ships with Kafka:

How to fetch latest Tweets?

It is a robust Java HTTP library for consuming Twitter’s Streaming API. It enables clients to receive Tweets in near real-time. Every Twitter account has access to the Streaming API and any developer can build applications using it.

Let’s go ahead and start implementing a Kafka Producer Client which will utilize this service. For all those who want to see the completed code, here is the link: https://github.com/dbsheta/kafka-twitter-producer

First of all, let’s define constants to configure Kafka Producer.

The tweet returned by Twitter API is very large string(json) and contains all details we require for our project. You can find full response here.

We create two entities Tweet and User to hold json responses since it would be easier to work with POJOs than with String responses. At this point, while sending tweets to Kafka, we’ll call toString() on the Tweet object so we don’t have to write serializer for our custom class.

Note: It is better to use a serialization library in such scenarios. We’ll see in a future post, how we can use Avro to serialize/de-serialize java objects while sending to or consuming from Kafka. We’ll discuss benefits of using Avro with Schema registry at that point.

Now, we have all the basic things needed for implementing producer. Let’s start creating TwitterKafkaProducer.

We will initialize our Twitter client in the constructor for our producer class. We have to pass key, secrets and token for authentication. Then we have to pass a list of terms which we want to track. Currently, I’m focused only on #bigdata

This completes the configuration of twitter client. Now we have to configure Kafka producer. I have created below a fairly simple producer.

Let’s go over the main knobs that we turned here. Rest you can easily find in Kafka Documentation and are pretty much self-explanatory.

Now, after configuring twitter client as well as producer, we only need to make a connection to twitter using the client, wait for someone to tweet with #bigdata. Once we get a tweet, send it to kafka using producer.

The client is responsible for fetching latest tweets on #bigdata and push it to BlockingQueue. In the infinite loop, we take one tweet at a time from the queue and push it to kafka by using Tweet ID as key and the whole tweet as value. Since we have used BlockingQueue, queue.take() will block the flow until twitter client fetches new tweet.

Let’s see our code in action! First, I will create a new topic bigdata-tweets with replication factor of 2 and number of partitions 3.

Now, just to verify that the tweets really were persisted by kafka, we’ll start a simple console consumer provided with Kafka distribution.

Run the TwitterKafkaProducer app. It should start sending data to Kafka.

You should see something like this on your console consumer:

If you see the tweets like these, congrats my friend, you have created one data pipline! You fetched data from a source (Twitter), pushed it to a message queue, and ultimately consumed it (printed on console).

We used Twitter Streaming API along with Kafka Clients API to implement a Producer app which fetches data from twitter and sends it to kafka in real-time. In the next part, we’ll see how we can consume this data to do collect some stats in real-time on streaming data.

Running Kafka on Kubernetes for local development with Helm