Welcome back to the Event Loop article series! In the first article of the series, we discussed the overall picture of the Node JS event loop and it’s different stages. Later in the second article, we discussed what timers and immediates are in the context of the event loop and how each queue is scheduled. In this article, let’s look at how event loop schedules resolved/rejected promises (including native JS promises, Q promises, and Bluebird promises) and next tick callbacks. If you are not familiar with Promises yet, I suggest you should first get in touch with Promises. Believe me, it’s so cool!!

There are some changes introduced in Node v11 which significantly changes the execution order of nextTick, Promise callbacks, setImmediate and setTimeout callbacks since Node v11. Read more:

New Changes to the Timers and Microtasks in Node v11.0.0 ( and above) | by Deepal Jayasekara | Deepal’s Blog

In the context of native promises, a promise callback is considered as a microtask and queued in a microtask queue which will be processed right after the next tick queue. 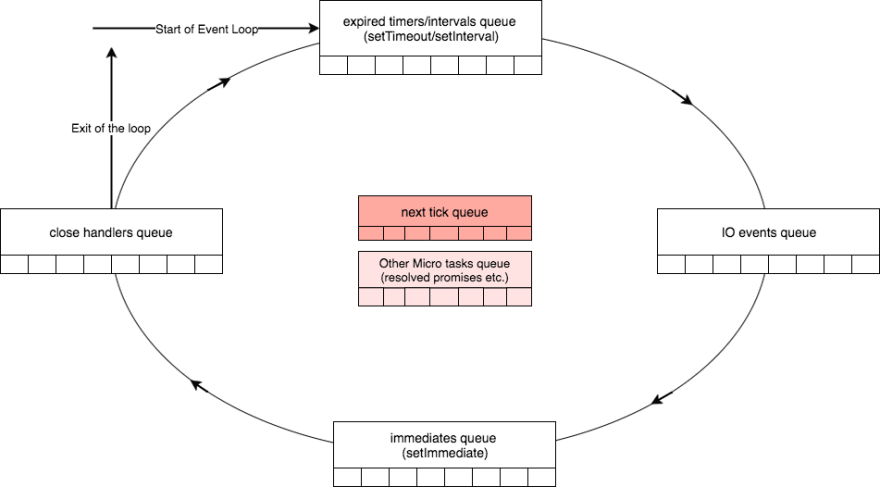 In the above example, the following actions will happen.

Then the event loop will start checking the process.nextTick queue.

Enough of seeing the two words “promises microtask” everywhere instead of just “microtask”?

I know it’s a pain to see it everywhere, but you know that resolved/rejected promises and _process.nextTick_ are both microtasks. Therefore, trust me, I can’t just say nextTick queue and microtask queue.

So let’s see how the output will look like for the above example.

Cool! We now know that the resolve/reject callbacks of JS native promises will be scheduled as a microtask and will be processed before the loop moves to a new phase. So what about Q and Bluebird?

At the time of this writing, Q (v1.5.0) uses process.nextTick queue to schedule callbacks for resolved/rejected promises. Based on the Q docs,

Note that resolution of a promise is always asynchronous: that is, the fulfillment or rejection handler will always be called in the next turn of the event loop (i.e. process.nextTick in Node). This gives you a nice guarantee when mentally tracing the flow of your code, namely that then will always return before either handler is executed.

On the other hands, Bluebird, at the time of this writing (v3.5.0) uses setImmediate by default to schedule promise callbacks in recent NodeJS versions (you can see the code here).

To see the picture clear, we’ll have a look at another example.

In the above example, BlueBird.resolve().then callback has the same semantics as the following setImmediate call. Therefore, bluebird’s callback is scheduled in the same immediates queue before the setImmediate callback. Since Q uses process.nextTick to schedule its resolve/reject callbacks, Q.resolve().then is scheduled in the nextTick queue before the succeeding process.nextTick callback. We can conclude our deductions by seeing the actual output of the above program, as follows:

Please note that although I have used only promise resolve handlers in the above examples, this behavior is identical for promise reject handlers as well. At the end of this article, I’ll present you an example with both resolve and reject handlers

Bluebird, however, provides us a choice. We can select our own scheduling mechanism. Does it mean we can instruct bluebird to use process.nextTick instead of setImmediate? Yes it does. Bluebird provides an API method named setScheduler which accepts a function which overrides the default setImmediate scheduler.

To use process.nextTick as the scheduler in bluebird you can specify,

and to use setTimeout as the scheduler in bluebird you can use the following code,

— To prevent this post from being too long, I’m not going to describe examples of different bluebird schedulers here. You can try out using different schedulers and observe the output yourself —

Using setImmediate instead of process.nextTick has its advantages too in latest node versions. Since NodeJS v0.12 and above does not implement process.maxTickDepth parameter, excessively adding events to the nextTick queue can cause I/O starvation in the event loop. Therefore, it’s safe to use setImmediate instead of process.nextTick in the latest node versions because immediates queue is processed right after I/O if there are no nextTick callbacks and setImmediate will never starve I/O.

If you run the following program you might run into a bit of a mind-twisting output.

Now you should have two questions?

Great! Now that you know a lot about setTimeout, setImmediate, process.nextTick and promises, you should be able to clearly explain a given example of these. If you have any question regarding this article or something to be added, I appreciate if you post them in response. In the next article, I’ll discuss how I/O is processed with the event loop in detail. And believe me, It will be an awesome topic!