Welcome back to the Event Loop article series! In the first part of the series, I described the overall picture of the NodeJS event loop. In this post, I’m going to discuss in detail about three important queues we discussed in the first article with example code snippets. They are timers, immediates, and process.nextTick callbacks.

Let’s look at the event loop diagram that we saw in the previous post. 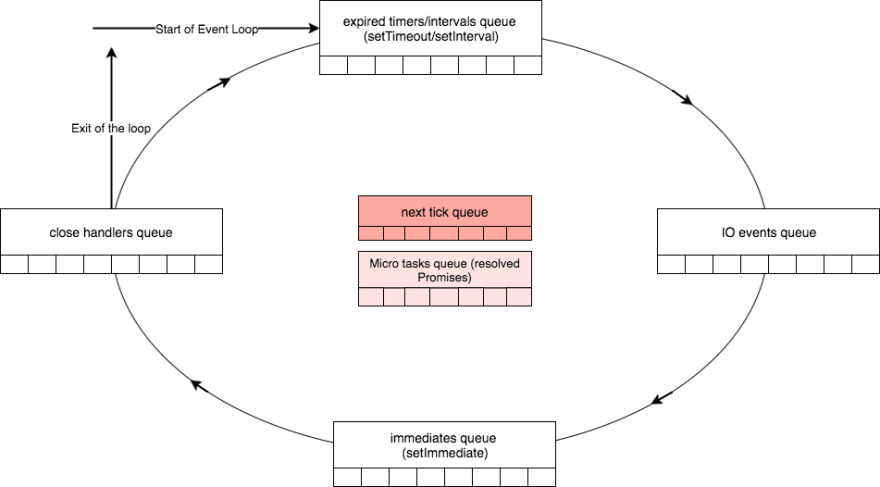 Next tick queue is displayed separately from the other four main queues because it is not natively provided by the libuv , but implemented in Node.

There are some changes introduced in Node v11 which significantly changes this behavior since Node v11. Read more:

New Changes to the Timers and Microtasks in Node v11.0.0 ( and above) | by Deepal Jayasekara | Deepal’s Blog

This introduces a new problem. Recursively/Repeatedly adding events to the nextTick queue using process.nextTick function can cause I/O and other queues to starve forever. We can simulate this scenario using the following simple script.

You can see the output is an infinite loop of nextTick callback calls, and the setTimeout, setImmediate and fs.readFile callbacks were never called because any of the ‘ omg!…’ messages were printed in the console.

You can try setting a finite value as the parameter to addNextTickRecurs and see that setTimeout, setImmediate and fs.readFile callbacks will be called at the end of the process.nextTick call * log messages.

Before Node v0.12, there has been a property called process.maxTickDepth which is used as a threshold to the process.nextTick queue length. This could be manually set by the developers so that Node will process no more than maxTickDepth callbacks from the next tick queue at a given point. But this has been removed since Node v0.12 for some reason. Therefore, for newer Node versions, repeatedly adding events to next tick queue is only discouraged.

When you add a timer using setTimeout or an interval using setInterval, Node will add the timer to the timers heap, which is a data structure accessed through libuv. At the timers phase of the event loop, Node will check the timers heap for expired timers/intervals and will call their callbacks respectively. If there is more than one timer that was expired (set with the same expiration period), they will be executed in the order they were set.

The above program will start a timer for 1000ms when the program starts and will log how much time it took to execute the callback. If you run this program multiple times, you will notice that it will print a different result each time and it will never print timeout callback executed after 1s and 0ms. You will get something like this instead,

This nature of the timeouts can cause unexpected and unpredictable results when setTimeout used along with setImmediate which I’ll explain in the next section.

Now, when we look at the event loop diagram at the top of this post, you can see that when the program starts its execution, Node starts processing the timers. And later after processing the I/O, it goes for the immediates queue. Looking at this diagram, we can easily deduce the output of the following program.

As you might guess, this program will always print setTimeout before setImmediate because the expired timer callbacks are processed before immediates. But the output of this program can never be guaranteed! If you run this program multiple times, you will get different outputs.

This is because setting a timer with zero expiration time can never assure that the timer callback will be called exactly after zero seconds. Due to this reason, when the event loop starts it might not see the expired timer immediately. Then the event loop will move to the I/O phase and then to the immediates queue. Then it will see that there is an event in the immediates queue and it will process it.

But if we look at the following program, we can guarantee that the immediate callback will be definitely called before the timer callback.

Let’s see the execution flow of this program.

So let’s have a look at how these different phases/queues work altogether in the event loop. See the following example.

After the execution of the above script, the following events are added to the respective event loop queues.

Great! If you run the above code, you will now get the following output.

Let’s discuss more on next-tick callbacks and resolved promises in the next post. Please feel free to put a response if there’s something to be added to this post or altered.

A Memory Trick To Remember When to Use for...of vs for...in